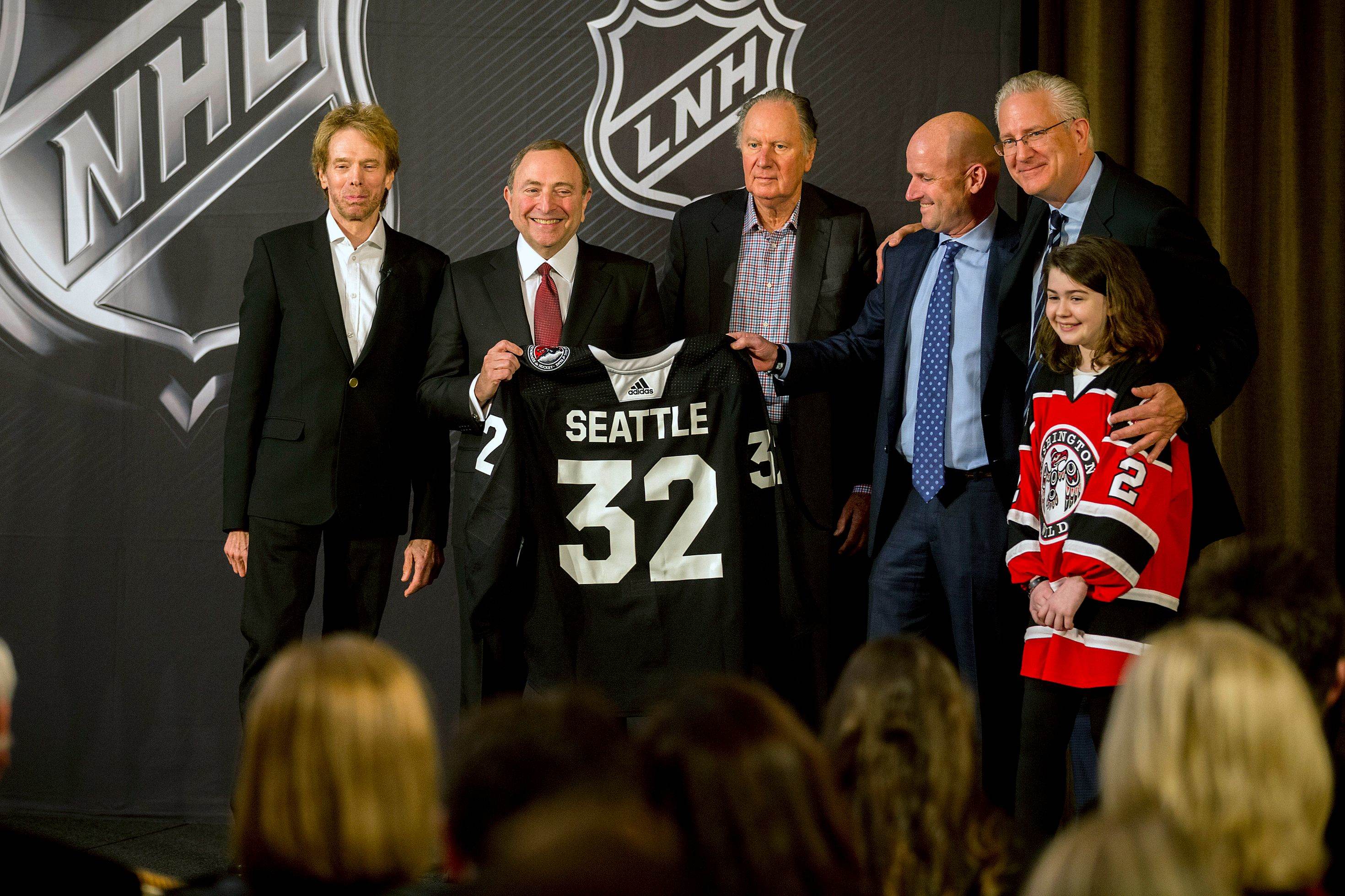 Welcome to Nick’s NHL wrap where I’ll bring a weekly digest of NHL content here on Slant Sports. I’ll cover the latest trending topics of the game to keep you up to date, in case you missed something. You’ll also see the stand-out game of the week as well as a league-wide stock watch where we look at how teams around the NHL are playing. And we’ll also have a Moment of the Week that brings you the funny, wacky, or heart-warming sights and sounds from around the league we love. So let’s get to it.

Seattle Expansion: The NHL board of governors recently announced that the league will add a 32nd club in the Western Conference with Seattle being awarded a franchise. An ownership group composed of investment banker David Bonderman and Hollywood producer Jerry Bruckheimer will look to find success in the great northwest.

This, to me, is a strong choice of an expansion market by the league. It makes a lot of sense to have an even number of clubs which balance out the divisions.

Seattle is the type of sports town that will gravitate towards hockey much like it did soccer, a sport outside the big 4 in America that has seen great success in that market with the Seattle Sounders being wildly popular. Judging by footage of the announcement there are hockey fans in the city already with the Canucks being just over the border in Vancouver. Those fans will now have a team to call their own and as we saw in Las Vegas, there is something very special about that.

Overall, I think this has a chance to be a big hit for the league. On the flip side there is a loser in this scenario, and that’s the Arizona Coyotes who will move to the very tough Central division.

Arizona has had a hard time making it into the playoffs in the weaker Pacific division, and will now deal with the heavy weights of the league, like Nashville and Winnipeg, a lot more. This move to the Central also makes me wonder if a potential relocation to Houston Texas is possible for them, joining the Stars in the division in the Lone Star state, as Arizona works to resolve their arena situation in the desert.

And as for a name, there’s a lot of interesting suggestions out there, but don’t expect any obvious choices. Not many figured Las Vegas would be the Golden Knights, as a gambling themed name was thought to be coming. Only time will tell what this franchise will be called, what they will wear, and who will play for them.

Game of the Week

Our game of the week comes from Alberta, as the Calgary Flames battled the Philadelphia Flyers at the Saddledome. These two teams are on opposite ends of the spectrum this year with the Flyers last in the Metro division, while the Flames lead the Pacific. Despite that, the two combined for a great tilt Wednesday night that featured another epic Calgary comeback.

The Calgary Flames erased another third period deficit and beat the Philadelphia Flyers in OT 6-5.

It’s interesting watching this Flames team this season as they have had loads of potential for some time. Goal tending has been an issue but their true problems ran a lot deeper. Maybe it was preparation, maybe it was lack of leadership, but they’re not underachievers anymore.

New coach Bill Peters has this team firing on all cylinders with big guns like Sean Monahan and Johnny Gaudreau leading the way. Fresh arrivals like Elias Lindholm and Noah Hanifin have made their presence felt, and David Rittich has helped settle the goal tending situation, working in tandem with Mike Smith. The Flames look primed for a run this year into the playoffs and beyond; they’ll be a fun addition to the field this spring.

Winnipeg Jets: The Jets came into the year as a favorite to win the Stanley Cup, but they were a bit sluggish out of the gate. They’ve really hit their stride lately though as they are 9-1 in their last 10 games to go atop the Central division. They had a strong trip to the East coast taking points off the New York hockey locals and just beat the league-leading Lightning in OT on Sunday.

The Jets look a lot more like the team we expected them to be this preseason and they can only get better from here, with all their pieces playing at a high level and the prospect of them acquiring a forward at the trade deadline.

Las Vegas Golden Knights: Speaking of teams finding their game, the defending Western Conference Champion Golden Knights are heating up with a record of 7-2-1 in their last 10. The recent run has them in the first wild card spot in the West, just 6 points behind the division leading Flames.

Despite a tough OT loss to New Jersey on Friday the Knights got more good news as they return center Paul Stastny from injury. He’ll play a key role in this team’s success going forward, playing well in all three zones, and balancing out their lineup.

Columbus Blue Jackets: The Blue Jackets are one of the more odd situations in the league this year with star players Artemi Panarin and Sergei Bobrovsky looking to leave for greener pastures in the summer, while trying to compete.

They were expected to be one of the better teams in the Metro division this year, and despite being in second place, they’re just 5 games over .500 right now. They’re also 4-5-1 in their last 10 with some ugly performances along the way, as they lost 9-6 to the Flames and 3-2 to Vancouver, both coming on home ice.

It feels like things are coming to a head in Ohio where it may be time to consider trading one of the aforementioned Panarin or Bobrovsky to change up the personnel.

As a small market team, they can’t afford to lose both for nothing in free agency.

New York Rangers: This one isn’t particularly fun to write but my New York Rangers find themselves in bit of a rough patch with a record of 2-5-3 in their last 10 games. A stretch that has seen them suffer some heart breaking loses in overtime and shootouts, including Friday night’s disaster against Arizona, a game that former Ranger Derek Stepan won in OT.

The young Blue shirts got off to a strong start that saw them in a playoff spot at Thanksgiving day. But of late they’re more of what we expected this season, a young team learning as they go.

There’s a lot to like so far about the play of young forwards Brett Howden and Filip Chytil, and blue liner Neal Pionk. Chris Kreider and Mika Zibanejad are enjoying career years as well. Overall, David Quinn’s group is setting up for better seasons ahead, but this year could see some second half struggles as the Rangers’ “rebuild” rolls on.

Moment of the Week

Wednesday night at United Center, hockey fans got another in a long line of cringe-worthy moments from NBC’s Pierre McGuire. He interviewed Blackhawks captain Jonathan Toews after Chicago’s 6-3 win over the Penguins. The win snapped Chicago’s 8-game slide and McGuire chose to make light of the fans’ reception for this Hawks team, that is, a shell of its former self.

As it so often does with Pierre, things got awkward.

Chicago finally snaps out of their 8 game losing streak and gets the win. Also featured are the 3 stars of the game, and Pierre McGuire’s interview with Jonathan Toews. 3: B. Rust (PIT) 2: M. Kruger (CHI) 1: A. Martinsen (CHI)

I’ve always given McGuire a lot of credit for his passion for the game of hockey. Not many love it like he does. Sometimes that comes out wrong, and this was one of them. He’s a good sport though as we all had a good laugh at Toews notoriously serious demeanor, being dumbfounded by the line of questioning.

This is just the first of what will be more weekly NHL wraps here on Slant Sports. Tweet with me @PBPNick and contribute to the weekly articles with topics or video clips worth highlighting. Keep an eye out for a twitter poll as well, related to the Seattle expansion draft. Enjoy the league everyone!