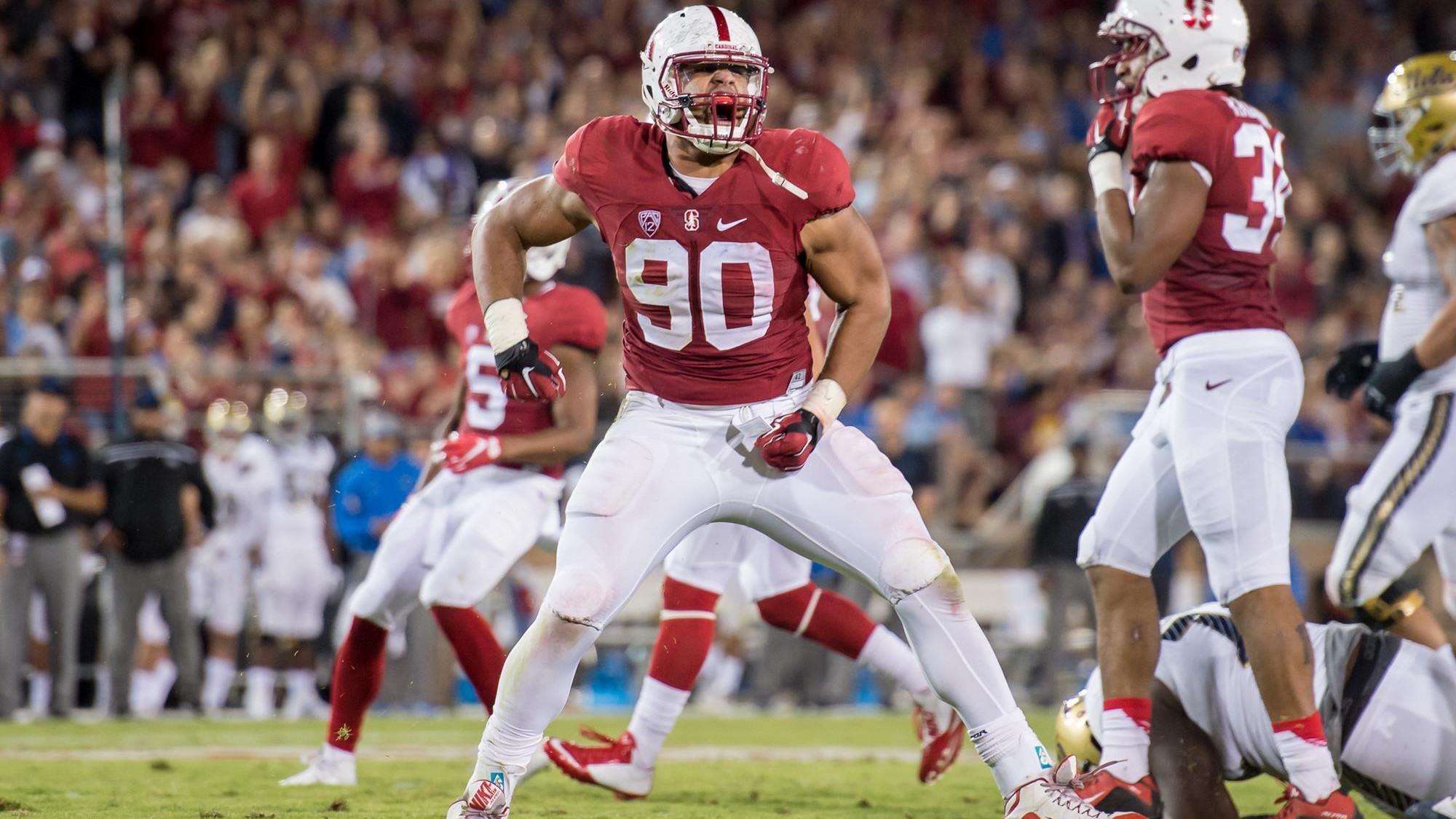 With 8.5 sacks as a Junior for the Stanford Cardinal, Solomon Thomas has busted onto the scene as one of the 2017 NFL Draft’s top defensive line prospects – which speaks volumes in such a deep class. Thomas is a physical freak that will likely generate even more buzz at the Scouting Combine, as his college tape also speaks for itself when projecting his talent to the next level.

Solomon Thomas’ biggest strength is just that – his natural strength as a rusher. With his best reps coming against guards, Thomas’ incredibly strong legs never stop driving, which often sets him up to shed blocks at the point of attack and finish.

Thomas may not always win with his hands, but his ability to fluidly use his power as a down-the-line player ensures that he rarely gets washed out of a play.

While he can sometimes win against guards even when they establish a good set against him, Thomas is a much better player on the interior when he wins off the line and knocks his blocker off balance.

As he does so consistently, and in the above clip, Thomas closes on the quarterback in a hurry thanks to his combination of power and balance.

We’ll get to the flaws in Thomas’ game in the next section of this scouting report, but his NFL projection to me comes down to the “ceiling vs. floor” debate. Thomas’ ceiling is certainly high, and while it may not be as astronomically high as other true EDGE prospects in this draft, it is his floor that makes him a special player.

Solomon Thomas’ floor as a physical specimen that can hold down a starting job at both 3T DT and LDE on day one in the NFL, while developing into a potential Pro Bowler, make him one of the most fun prospects to study in this class.

As mentioned, Thomas is not often seen getting pushed away from the point of attack, but he will get taken out of more plays than necessary for his tendency to want to hand fight guards at the line of scrimmage. On his flash plays, Thomas converts his lower body strength into the bend and flexibility that allows him to finish plays, but in other examples he’ll fail entirely to stack and shed.

What makes this inconsistency all the more frustrating with Thomas is that even when he wins late in the down against a guard without stacking and shedding, he sparingly shows the speed or open-field athleticism to makes tackles in these situations.

Thomas’ array of true pass rushing moves is also not NFL ready, as he really only features an unpolished counter move to swipe the hands of his blocker once being engaged at the line. If a lineman gets his hands inside on Thomas, he can win the play rather easily despite Thomas’ ability to extend and anchor.

Relying too much on a pure bull rush approach is a common issue with defensive line prospects in the draft, and it is important to remember here that Thomas’ bull rush is also one of the best you’ll see coming out of college.

To live up to his full potential though, Solomon will need to continue to make the plays that he consistently makes look easy at the next level, while also finding a way to round out his game in an effort to become a dominant run stopper and quarterback killer.

With one of the highest floors of any 2017 NFL Draft prospect I’ve scouted so far, Solomon Thomas is going to be a fixture on any team’s defensive line for a long time in the NFL.

His best position for instant success will be at 3T DT, but scouts should feel comfortable projecting Thomas as a base strong side defensive end as well – with the ability to both extend outside and fold inside against the run.

The constant rigor and attention to detail that Thomas will be exposed to at the next level will only help the incredibly smart player quickly clean up the areas of his game such as balance and in-space tackling ability, that could make him one of the best overall defensive linemen drafted come April.

Solomon Thomas confidently earns a first round grade on my 2017 NFL Draft board.