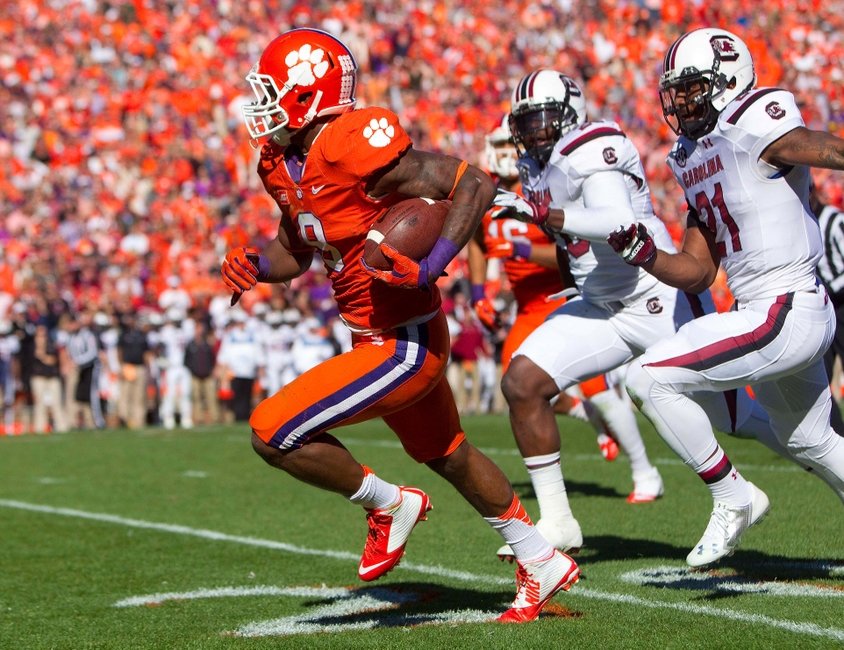 When you think of the National Champion Clemson Tigers, a few names come to mind on the offensive side of the ball and the 2017 NFL Draft. QB Deshaun Watson and WR Mike Williams have gotten plenty of attention, but RB Wayne Gallman was a critical piece to this team as a three year starter and 1,133-yard rusher with 17 touchdowns as a Junior.

The first thing that stands out with Wayne Gallman is his completeness as a running back prospect. Not reliant on any one trait to produce in this Clemson spread offense, Gallman shows NFL potential with his shiftiness, power, and open field speed.

When Gallman can get blockers in front of him on the edge, he is in his comfort zone seeking the corner with sneaky turning speed while also possessing the physicality and willingness to bang these runs inside and pick up “dirty” yards.

On interior runs, Gallman shows a good understanding of when to simply put his head down and fight for the yards ahead of him and when he can spring the play outside of the tackles. Here, he diagnoses the situation quickly with the middle linebacker shooting the gap – dipping to take full advantage of the left tackles’ seal block and create an explosive play.

Wayne Gallman consistently hits the hole hard and with a low center of gravity, allowing him to turn seemingly lost plays into difference-making gains on early downs. Gallman does so by constantly keeping his legs churning, light enough on his feet to make linebackers miss at the second level too.

I mentioned Gallman’s all-around talent as a running back, and a big part of that is pass blocking. Not nearly the most technically sound blocker, Gallman always gets the job done with his willingness to seek contact along with the ability to quickly convert his arm strength into his base and finish blocks.

One of my first observations with Gallman was scheme-based, as I wanted to see him run in a more pro-style offense. With that said, he found ways to be productive and execute what was asked of him – with no better example being this touchdown for Watson in the national championship that he makes the decisive block for.

Gallman is not the dynamic athlete that runs away from many defenders, which hurts him on the between the tackle runs previously mentioned. When forced to put his head down for yards, Gallman rarely breaks away from many linebackers or defensive ends from the backside.

Part of this problem for Gallman also stems from his inability to consistently “get skinny” and shorten his stride. “Skinniness” is a term used with running backs to describe their profile as a ball carrier in the hole, and while Gallman flashes at times in this regard, his balance and often long stride deter him from ripping off more chunk plays.

As a pass catcher, Gallman is a comfortable hands catcher that is a viable option in the passing game. However, he displays a below-average understanding of his surroundings after the catch, consistently failing to turn up field and getting tackled while gaining no ground laterally too often.

It is likely that some NFL scouts will give Gallman a low grade in pass protection, despite him not giving up many pressures or sacks. Ideally, his technique needs a complete rework, as lunging at blockers and throwing his body around recklessly at times will not fare well at the next level.

The value for Wayne Gallman in this deep class of running backs at the 2017 NFL Draft is incredibly high, as a team that passes on adding a back early can bring in Gallman to help their offense as a three down player.

Earning a second round grade on my 2017 NFL Draft Board, Wayne Gallman has home run potential on the edge with the ability to also churn out the tough runs that will keep offenses on pace.

As a pass catcher, Gallman is a comfortable route runner and hands catcher that can stretch the field with vertical routes.

An adequate blocker too, Wayne Gallman is the type of player that teams love in the NFL Draft – with no glaring weaknesses and tons of upside.