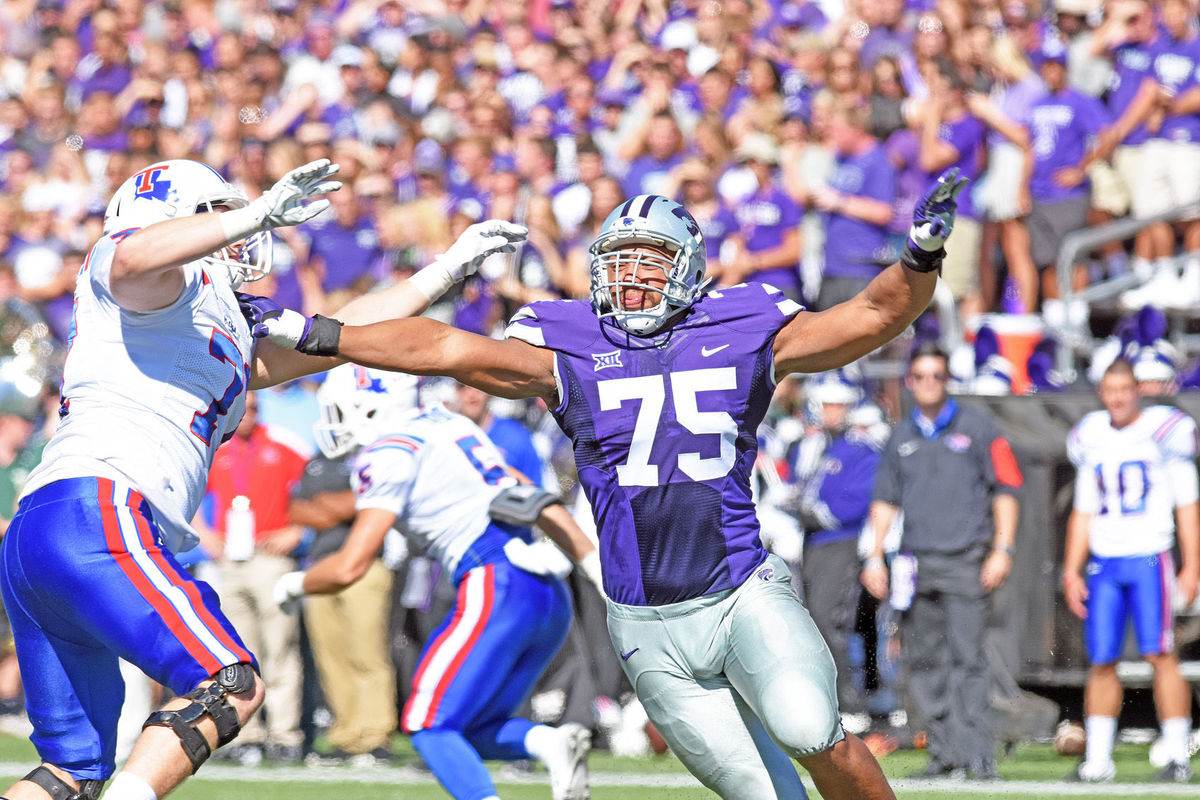 With 11.5 sacks in 2016 for Kansas State, defensive end Jordan Willis cemented himself as a legitimate EDGE prospect in the 2017 NFL Draft. Furthering his case to hear his name called early with an impressive and possibly surprising athletic performance at the Combine, Willis has all of the traits to be an immediate impact player in the NFL.

Jordan Willis plays with a constant motor that allows him to make plays off the edge even when offensive tackles get a good set against him. Not dominant in any one area as a true pass rusher, Willis has an outstanding feel for how to use his body in positioning but also his 33.5″ arms to disrupt passes like the one above.

When Willis is able to get a good first step up the field, his hand work is at its best as a rusher. Already being one of his best and most polished traits, Jordan Willis effortlessly converts his speed to power on the edge and can rip or occasionally dip his way to the quarterback and finish.

Probably best described as a “flash player” on his best snaps, Willis is as explosive of a rusher in this class when it comes to his lower-body power and precision in rushing the “half man” – or staying outside of his blocker. He also flashes some impressive bend at times, cornering with a low enough pad level to win the edge and still deliver big hits.

An incredibly aware player, Willis is always looking for ways to fight back to the football and put his stamp on a play. In run defense, Willis will hold the point of attack by extending against his blocker while being able to fluidly turn and chase as well.

All of these positive traits add up to Willis projecting best as a left defensive end in the NFL, but his flashes should give teams no reason to think he can’t rush off of the weak side on occasion.

The problem with flash players is that, in between the flashes, it can be difficult to figure out if the raw traits displayed on tape are enough to make up for the lack of production.

In Jordan Willis’ case, there are far too many plays (nearly all of them) where he generates no knock back against his blocker – easily allowing them to get their hands inside on him and plant.

When this happens, Jordan Willis also rarely displays the ability to snap back to the football or produce with any counter moves. Instead, Willis finds himself behind the pocket a lot, either as a result of this bad get-off on the snap or lack of bend to dip the corner.

Projecting Jordan Willis to add any new pass rushing moves to his arsenal would be just that – a projection with little evidence based on collegiate tape. While he has the hand speed and strength to potentially develop a better counter or rip move, Willis relies mostly on inconsistent speed and above-average power to get to the quarterback.

If NFL tackles are able to take his power moves away while taking advantage of his often frustratingly high pad level, they’ll quickly be able to expose a player that has risen up draft boards over the past weeks.

Overall, the 2017 NFL Draft class at defensive end is best described as being deep in certain pockets. Once you move past players like Myles Garrett and Carl Lawson, there will be other options late in the first round and early in the second that have the potential to quickly outplay their draft status.

This could be the case with Kansas State’s Jordan Willis, as he has all of the traits to rush the passer at both defensive end positions. Willis’ never-ending motor will always put him near the football, and at his best, he finds multiple ways to win on the edge that will translate nicely to the NFL.

With Jordan Willis, his weaknesses aren’t so much deficiencies he shows on tape as much as areas that he must improve in to have a lasting impact in the NFL. As is, I give Willis a second-round grade on my 2017 NFL Draft Board.

Any team that misses on a top EDGE prospect should be ecstatic to land Jordan Willis and his upside at this spot in the 2017 NFL Draft.