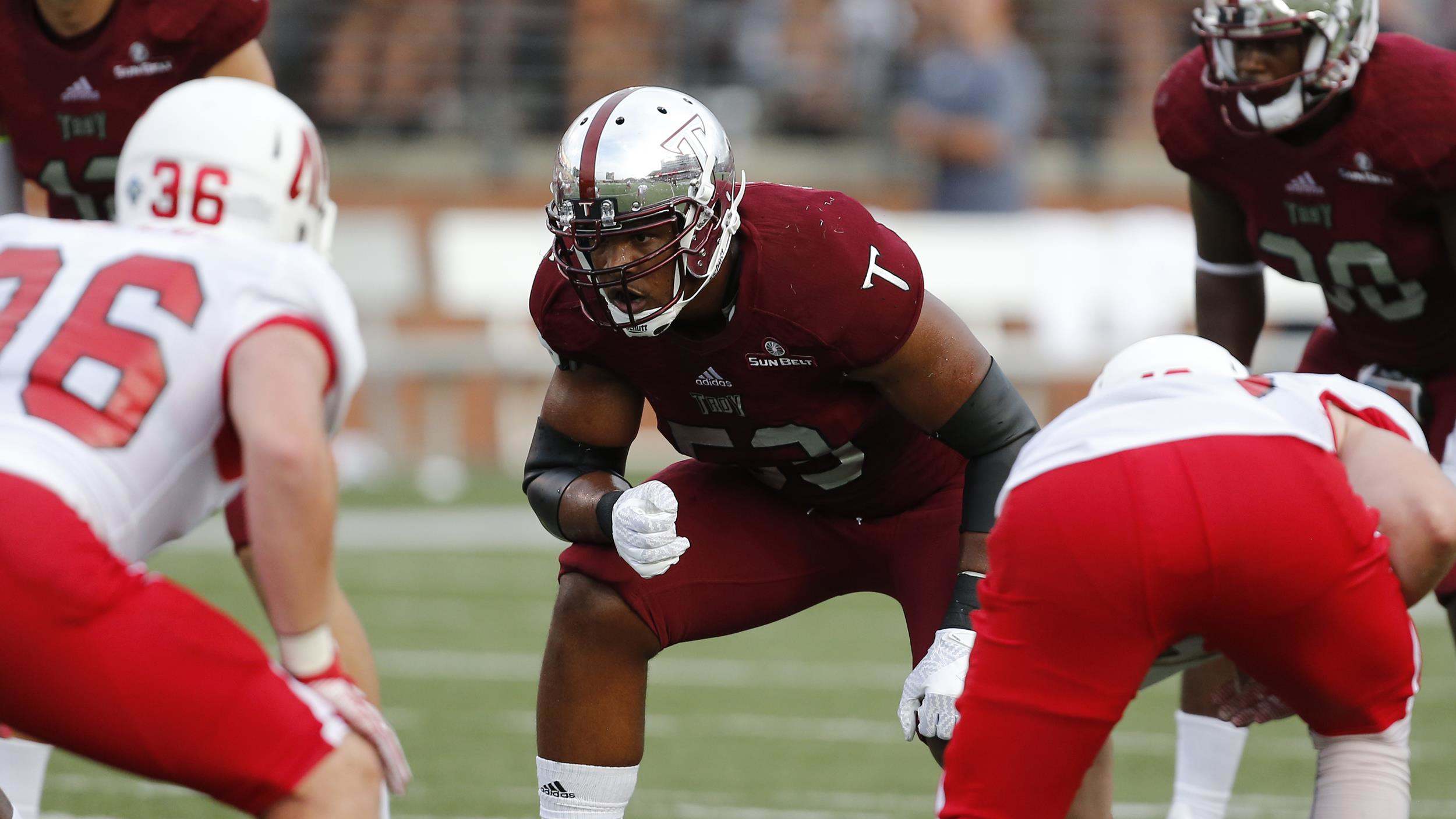 Often refereed to as a weak class, the 2017 NFL Draft actually features some hidden gems at the offensive tackle position. One of those hidden gems comes from the same school as the recently retired DeMarcus Ware, Troy University.

Troy tackle Antonio Garcia is one of the smoothest, most athletic offensive linemen in this year’s draft.

Unlike fellow tackle prospect Cam Robinson, Garcia has a very slender build, almost resembling a thicker tight end on some of his 2015 game film. Still, Garcia is listed a 6’6″ 302 pounds, and with a little work in the weight room, should have all the bulk and strength needed to play left tackle in the NFL.

On the field, Garcia has put together some of the best tape of any tackle in this year’s draft. With effortless footwork and impressive lateral quickness, Garcia beats speed rushers to the edge routinely in pass protection.

Antonio Garcia is also one of the more patient pass protectors in this draft class. Here we see him kick-slide and mirror the defensive end’s movements at the line of scrimmage. Then, as soon as the pass rusher drops his head and makes a mistake, Garcia makes him pay.

This technique is something that current Dallas Cowboys left tackle Tyron Smith does really well. When the pass rusher leans on him, or ducks his head during the rush, Garcia kicks back, remains patient, and swipes him down to the ground.

When scouting a tackle, I love to see them make pass rushers pay for their mistakes, no matter how small a mistake it seems at first.

Antonio Garcia is incredibly athletic. With loose hips, quick feet, and fluidity of motion, Garcia almost never gets cleanly beaten around the edge. Especially not with a pure speed rush.

Strong and efficient with his hands, I consistently saw Garcia punch and re-direct pass rushers who attempt to beat him to the edge. Against Clemson here, we see Garcia remain patient in his pass set, before delivering a solid punch and driving the defensive end to the ground.

In pass protection, Garcia does a nice job of keeping his feet active through contact, maintaining leverage, and staying firm to the pocket arc. Though he struggled a bit more with power moves, Garcia still showed the ability to anchor his hips and defend against those bull rushes.

As a pass blocker, Garcia is about as polished and smooth as they come out of college. In run blocking, however, Garcia needs much more work.

When run blocking, Garcia must work both on his pad level and hip explosion. Too often he meets defensive linemen with his body while standing straight up. This causes him to lose his leverage, and ultimately get beat.

Garcia must also get a wider base, stay square, and keep his feet moving through contact when drive blocking. He would serve himself well by adding both upper and lower body strength, as well as some extra core strength. By doing this, he will fix some nagging balance issues in run blocking. It would also help him to anchor better when run blocking, if he can add some bulk to his lower half.

I don’t believe that a more slender build should hurt him too much, though (*See Tyron Smith*).

The clip above sort of epitomizes Garcia in the run game to me. He is too high, he shoots his hands too late, and he is initially beat by the defender. But, he uses his positioning to his advantage, and continues working all the way through the play.

Then, he buries the defender into the ground.

I love seeing offensive linemen play with the type of edge and nastiness that Antonio Garcia does. I want my o-linemen to be pricks who play through the echo of the whistle. In my opinion, Garcia is just that.

Antonio Garcia is nowhere near a finished product as a left tackle. However, he has the frame to add some bulk, and has the natural athleticism and footwork to make his living at left tackle in the NFL in the near future.

I have a second round grade on Garcia, and expect him to have a nice career at the next level.