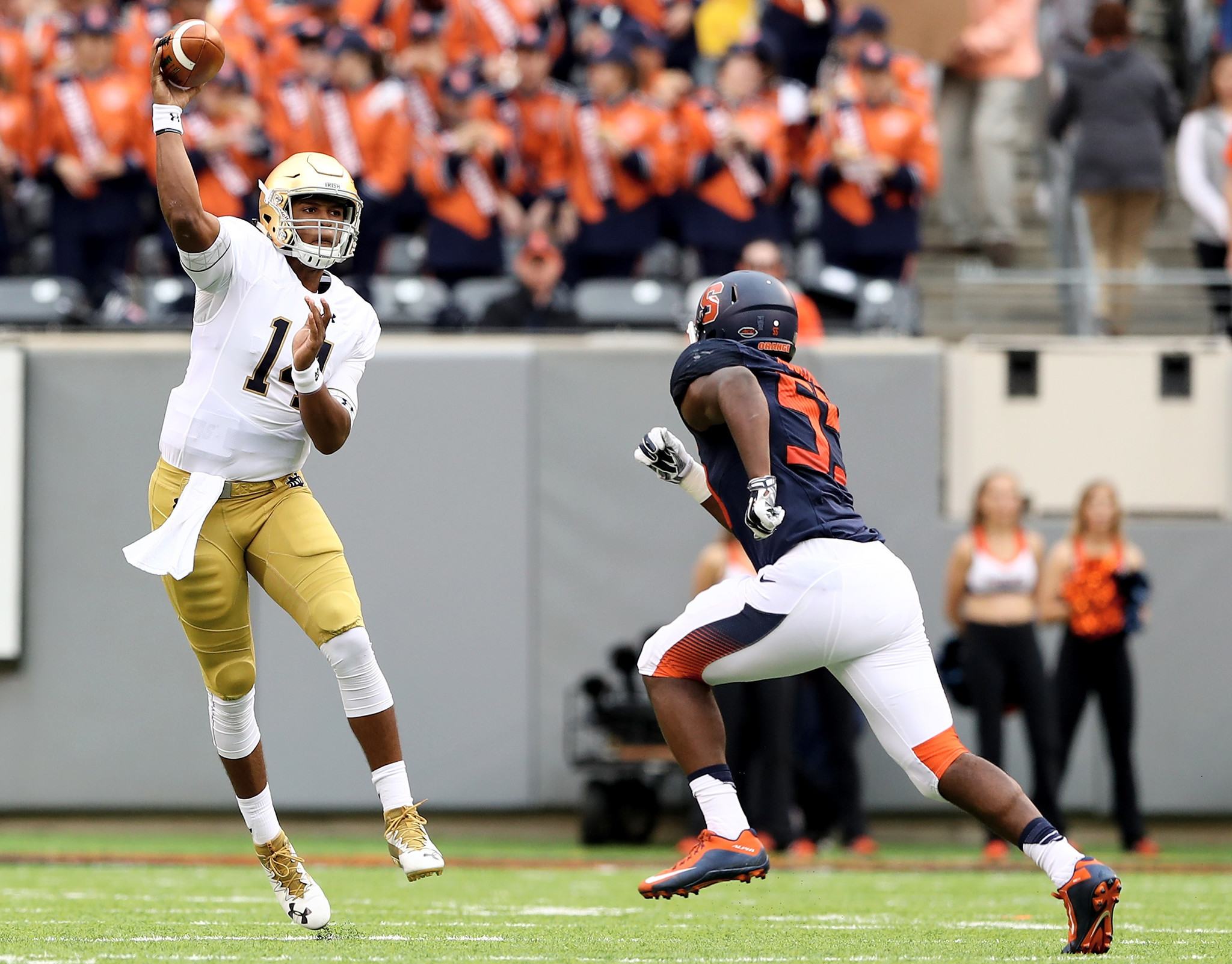 As the Super Bowl has ended and the Combine is quickly approaching, it is officially mock draft season. For better or for worse, mock drafts have become a staple of our draft culture.

This is my first attempt at mocking the 2017 NFL Draft, and I did it “my way.” Taking team needs into consideration, I used my own board to dictate how the draft will fall.

What does this mean?

This is not a projection of what I think “will” happen as much as it is what I believe should happen at this point in the draft process. I still have hours of film to watch, and there are still many more evaluations to come, but at this point here is what the 2017 NFL Draft should look like.

Honestly, this should be a no-brainer. The Browns have two picks in the top twelve this year, and have no reason to reach for a quarterback first overall. Garrett is the best player in this draft class and has a chance to be an incredibly productive pass rusher for many years to come. I don’t care who he wants to trade up for him, take Myles Garrett and prosper.

A new general manager and a new head coach usually means a new quarterback. While most are projecting the 49ers to grab North Carolina QB Mitch Trubisky here, I believe Kizer should be the pick. For my money, he is the top quarterback in this class and has a much higher ceiling than Trubisky does. It might take some time, but he can flourish in Kyle Shanahan’s system.

Just like the previous two teams, the Bears have a massive need at the quarterback position. But after missing out on Kizer, they decide to fill some of their other holes. Looking to Alabama defensive linemen Jonathon Allen, the Bears pick up my top graded DL in the class, and a player who can rush the passer on day one.

Solomon Thomas is rising fast on draft boards, going from a consensus top 10-15 pick to now a real possibility of being taken in the top 5. I’m not as high on Thomas as others, but he fills an immediate need for a Jaguars team which continues to build its defense here. Adding Thomas to a defense which already features with Jalen Ramsey and Myles Jack is a brilliant move.

The Titans most notable needs are wide receiver and defensive back. They address the latter of those here. Adams is my top rated Safety in this class and could go as high as number 3 overall to Chicago. With the Bears and Jags focusing on the d-line here, Adams falls to the Titans who will certainly be happy to have him.

Once again, a team with a strong quarterback need goes defense in the first round. With Trubisky and Deshaun Watson still on the board, the Jets instead take the best corner in this draft in Marshon Lattimore. With Darrelle Revis losing a step and the rest of the secondary in shambles, the Jets take a step towards having yet another dominant defense and draft Lattimore.

This was a tough pick to project, but with a top seven player on my board in Malik Hooker still available, the Chargers decide to improve their secondary. Rarely do safeties go in the top ten, but Adams and Hooker are two of the best players in this entire draft and deserve to go this early.

The Panthers need to get Cam Newton help on offense, and they start by adding one of the top running backs in this draft. With Newton and Fournette in the backfield, the Panthers could get back to being a dynamic offense in 2017.

Reuben Foster is the 3rd highest player on my draft board, so for the Bengals to get him 9th overall is a steal. Cincinnati seems to need help just about everywhere, but I don’t see how they can pass on Foster.

This is a pretty obvious pick which I’ve seen on countless mock drafts. I totally disagree with the Bills moving on from Tyrod Taylor, but it appears they are going to do so. With that, they’ll need a quarterback, and Watson will be a pretty good one to draft.

The Saints have been putrid against the pass just about every season, so drafting my CB2 in Teez Tabor here would be a smart pick.

I am nowhere near as high on Trubisky as seemingly everyone else is, but I do think he can be a solid QB in the NFL. The Browns have a massive QB need at the moment, which they address here.

With Larry Fitzgerald nearing retirement, the Cardinals have a real need for a future WR1. Corey Davis is the best wide-out in this class, and makes sense for Arizona.

At some point the Colts have to start taking care of Andrew Luck. Drafting Cook here is a step in the right direction to getting him a consistent running game.

Carson Wentz wasn’t very good his rookie season, but he didn’t have much help either. The Eagles desperately need a playmaker on the outside, and something tells me they’ll value Williams over any other wide-out in this class. They add a 50-50 ball beast and a red-zone threat here in Mike Williams.

Tim Williams is a top ten player to me, but his off the field concerns push him down the board. The Ravens have one of those “strong locker rooms” people like to talk about, so I bet they feel like can handle Williams. Plus, he’s one of the best EDGE guys in a loaded EDGE class.

When Malik McDowell is at his best he’s a top ten player in this draft. Too often he’s not, though. Either way Washington adds my third-highest rated defensive lineman and someone who can develop into an unstoppable force with coaching.

After addressing their secondary early on, the Titans give Marcus Mariota some help on offense. They would’ve preferred to add a receiver, but with Williams and Davis both gone, they get the best all-around tight end in the draft, and a “security blanket” for Mariota.

Tampa Bay has got to start patching up their secondary if they expect to make a run at the NFC South. I thought about going Obi Melifonwu here, but I think teams will value Budda Baker higher.

Denver needs to improve their offensive line badly. I don’t know how good Robinsonis going to be, but I do think he’s the best option here. I don’t have a first round grade on any offensive tackle, but I’d consider Robinson, Ryan Ramczyk, Antonio Garcia, or Taylor Moton here.

If you couldn’t tell, this year’s cornerback class is pretty deep. I like Sidney Jones a lot, even making him my third-highest rated corner. Detroit gets some defensive help here to stop teams from answering Stafford’s touchdown passes so quickly.

Some like Derek Barnett a lot more than me, but that doesn’t mean I don’t think he can be a productive professional player. Cameron Wake is getting up there in age, and Barnett should do a nice job filling in for him over the years.

For the first time in Eli Manning’s career, he gets a reliable, pass-catching tight end who can stretch the field. They wanted OJ Howard, but they will be perfectly happy with David Njoku, who is a top 25 player on my draft board.

These next couple of picks may surprise some people. I love Jaleel Johnson, and consider him the smartest and savviest defensive tackle in the draft. The Raiders could use a defensive tackle, and Johnson fits their scheme very well.

The Texans need a quarterback, and they grab one here. Mahomes is my QB2 of this class, but will more than likely be the fourth selected this April. With time, Mahomes could be the best of this year’s bunch.

Anyone who watched the Seahawks play this year knows how terrible their offensive line is. They need guard and tackle help, and Lamp can bring both. Lamp is my favorite offensive lineman in this class, and can be a special interior lineman if given the chance.

While Reuben Foster is the best linebacker in the draft, Zach Cunningham isn’t too far off. The Chiefs could use a linebacker, and Cunningham fits the bill perfectly.

While Takkarist McKinley and Carl Lawson are both rated higher on my board, Charles Harris to Dallas makes a ton of sense. The Cowboys desperately need a pass rusher with some explosion, and Harris brings more speed than just about any other EDGE player. Under Rod Marinelli’s coaching, Harris can become a problem for opposing offenses.

I went back and forth between White and Washington WR John Ross here, as the Packers need help in both areas. In the end, however, the corner makes more sense for them in round one. White is a sticky cover corner with good size and length to fit the Packers defense.

The Steelers need EDGE help and Takk can deliver. He is an extremely explosive player who can both win around the edge and with inside counter moves. With some coaching to develop his hands, Takk can become a Pro-Bowl caliber pass rusher.

The Falcons don’t have many holes, but adding Brantley with Grady Jarrett on the inside will be a pass-protection nightmare for offensive lines around the league.

Reddick played defensive end at Temple, but excelled at linebacker at the Senior Bowl. While other teams may not know what to do with this hybrid-type player, the Patriots will have no problem finding a spot for him. I bet Reddick has 2 sacks and a forced fumble for the Pats in Super Bowl 52.