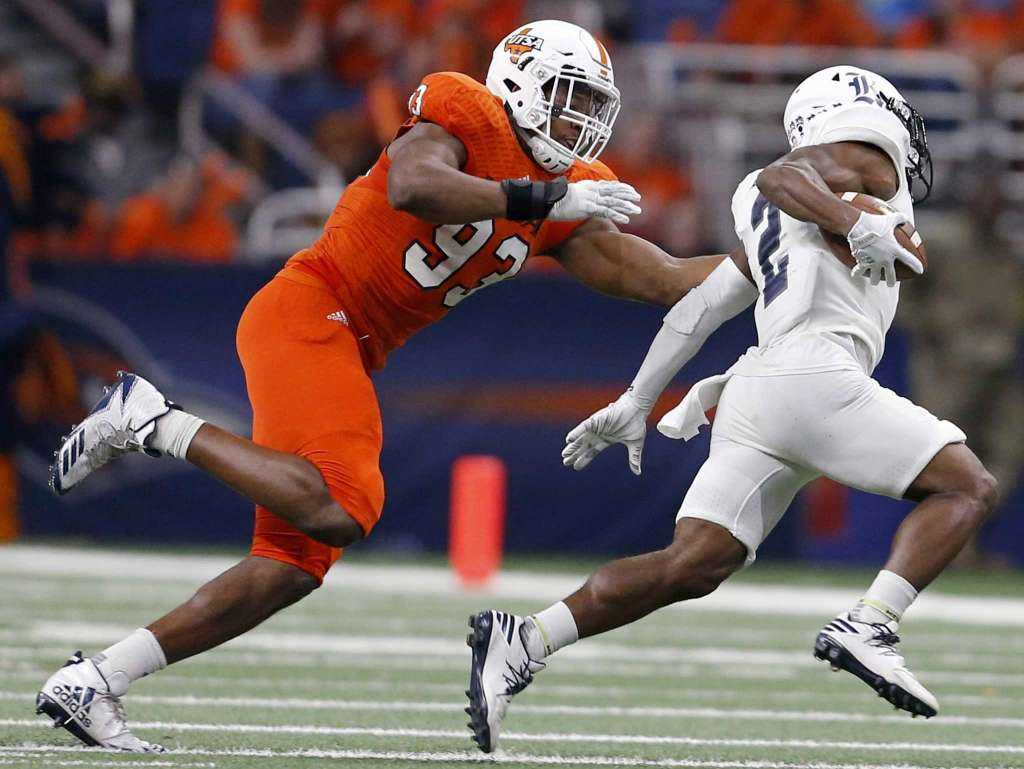 The University of Texas at San Antonio didn’t start playing football until 2011. Now, they have one of the top prospects in the 2018 NFL Draft, thanks to EDGE Marcus Davenport. This fearsome senior defender saw his sack production steadily increase over four years with the Roadrunners, entering the draft fresh off of 8.5 sacks and 17.5 total tackles for loss in 2017.

Davenport is listed as 6’7″ [6070] and 245 pounds. Many scouts — along with members of the media — are excited to get Davenport’s official measurements at the end of this month, with the small-school prospect set to appear at the Senior Bowl.

Marcus Davenport is an absolute force when rushing the passer, as both a defensive end and a 3T defensive tackle. Often making quick work of his blockers, Davenport has NFL-ready strength in his hands to pair with scary speed on the edge.

Davenport consistently captures the corner with his length and initial explosion. Whether or not running the arc to get to the quarterback will come as easily as it did in college will be determined for Davenport at the next level, but this is far from the only way he disrupts the passer. Simply forcing offensive tackles to respect his rare combination of speed and dip allows Marcus Davenport to knock them backwards with hands-above-eyes technique.

As far as power moves go, Davenport mixes up his long-arm approach with a violent push and pull that quickly disengages him from a blocker while firing his hips back towards the quarterback.

Davenport plays with a relentless motor that makes him one of the most active EDGE prospects I’ve studied in recent memory.

Likely a true RDE in the NFL, Davenport has no problem tightening the corner and chasing down run plays on the backside. When he’s around the football, players near him are typically being knocked down or going backwards, thanks to his strength and power.

For a player of his size, Davenport rushes with exceptional balance.

There simply aren’t many snaps on which he allows a blocker to work inside of his frame. Moving Marcus Davenport off the line of scrimmage is virtually impossible, which gives him added value playing as a left end and situational DT.

Watch as Davenport uses his length in the clip above to force the right tackle into a bad angle. Doing so while keeping his massive legs churning, Davenport puts himself in position to make quick work of the tackle once he’s level with the quarterback — tossing him aside to record a sack.

Add in this clip of Davenport ripping underneath his man to get to the QB again, and it’s easy to see why plenty of teams will be interested in Marcus’ services early in the 2018 Draft.

As mentioned, Davenport’s motor as a wrecking force for any front seven is far from a weakness — instead one of his greatest strengths. This doesn’t mean Davenport won’t need a better, more consistent approach to how he rushes the passer at the next level. Frustratingly, Marcus Davenport rushes his man straight down the middle far too often.

Tapping into Davenport’s full potential could be as simple as getting him in the habit of rushing the half man on every rep, but expecting him to do so right away is a projection.

Overall, Davenport should test very well as an athlete, but he’ll look clunky at times when transitioning through his rush moves on the edge. If he stops his feet or is sealed off from the corner early in the down, Davenport struggles to get going again with any leverage or power to recover.

As a finisher at the point of attack, Davenport doesn’t always wrap up with perfect technique. Instead, he remains high and allows runners to accelerate past him or easily turn the corner.

Earning a first round grade on my 2018 NFL Draft Board, Marcus Davenport is as complete a college EDGE prospect as there’s been in recent classes. An amazing feat considering his school, Davenport is truly a diamond in the rough with a slew of NFL-ready traits to warrant a top-20 selection.

Davenport can make his presence felt on day one in this league by playing the run well from the RDE position while also capturing the corner with ease and chasing down quarterbacks with frightening closing speed.

Showing overwhelming potential with both his finesse and power moves to develop into a sack artist, Marcus Davenport should fly the flag of UTSA football in the NFL for a very long time.