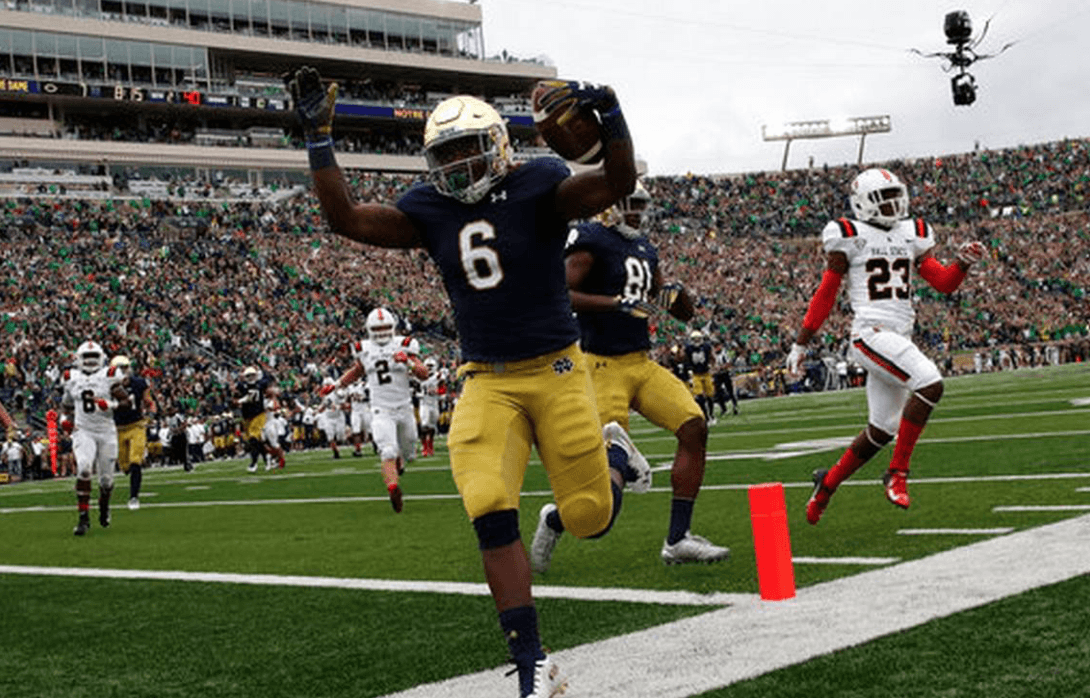 Ugly, sloppy, and complacent; there are the words that come to mind when evaluating the performance of the Notre Dame Fighting Irish in their 24-16 win over the Ball State Cardinals on Saturday. The Irish came in as 34-point home favorites and frankly, were lucky to escape with the win. Now, I’m not sounding the alarm bells after this game, but this has happened to Notre Dame all too often over the years and — if this team wants to achieve its goal of reaching the playoff — it cannot continue.

With that said, a win is a win, and that is what matters most at this level.

The simplest route to the playoff is winning out, so, to overstate the obvious, hanging on was key for the Irish. With all that in mind let’s get into what worked well, who stood out, and what needs to improve going into next week’s game against Vanderbilt.

Lock Down D – Once again the Notre Dame defense played a strong game, giving up just 16 points and forcing a pair of turnovers. They didn’t rack up sacks like they did a week ago against Michigan but they did enough to make the difference with their pass rush to force Ball State QB Riley Neal into some mistakes. They did give up a few too many yards, but the Irish mentality of bend but don’t break on defense was critical in the red zone and really made all the difference on the scoreboard.

Among the standouts was Linebacker Te’von Coney who was all over the box score in this one with 14 tackles, 1 sack, and 3 tackles for a loss. Working alongside Coney was fan-favorite Drue Tranquill, who had 9 tackles of his own. It’s really impressive to watch Tranquill at this stage of his career, with his adapting to the “rover” role, number 23 in blue and gold is all over the field making plays.

The secondary as a whole had a strong game, but for the second straight week Safety Alohi Gilman stood out with 9 tackles. Gilman’s energy and motor has been valuable so far, particularly considering the Irish played most of this game in second gear.

Ground and Pound – The Irish went with the running back by committee plan of attack and the results were good once again. Tony Jones Jr. and Jafar Armstrong had nearly identical stat lines in this one as their 26 combined carries totaled 127 yards and all three ND touchdowns.

Jones was particularly impressive on a critical run that broke the game open:

Brian Kelly has built this offense around running the football and both of these backs give the Irish flexibility with multiple playmakers at the position. If the Irish offensive line can improve, the Notre Dame run game could be very dangerous.

Jalen Elliott – As I mentioned earlier, the Irish defense was the star of this game, but cornerback Jalen Elliott stood taller than the rest in this one. Elliott’s pair of interceptions were critical to pin Ball State back and set the offense up with good field position, something it badly needed. It was impressive to see Elliott put together a strong performance after a so so game against Michigan week 1.

With Elliott picking up his game, the Irish could have a very solid secondary with Troy Pride, Alohi Gilman, and Julian Love doing the job alongside number 21.

What Needs to Improve

Offensive Line Play – Notre Dame’s offensive line didn’t have a great game against Michigan, but that was against players like Rashan Gary who are going to make a lot of guys look bad this year. However, on Saturday they weren’t facing a defense nearly as good as Michigan.

Ball State’s group certainly held their own but the Irish front line has to be better going forward.

Ball State constantly harassed Brandon Wimbush, sacking him 4 times. They also registered 10 tackles for a loss, which broke any offensive rhythm the Irish had on Saturday.

This group has a few weeks to pull things together before hosting Stanford and then traveling to Blacksburg to face Virginia Tech. A performance like Saturday’s against Bud Foster’s Hokie defense is a scary thought.

Quarterback Play – After playing one of his best games of his college career against Michigan week 1, Brandon Wimbush struggled mightily against Ball State. He certainly wasn’t helped by the offensive line, but Wimbush was inaccurate and failed to find open receivers down field. Going just 17/31 for 297 yards, no touchdowns and 3 interceptions, Wimbush had a miserable afternoon.

He spoke with the media about his play in the game:

I appreciate the accountability here from Wimbush and his leadership of the group, but he has to improve throwing the football and be more decisive in his decision-making — like he was against Michigan.

The struggles seem to be mostly mental for Wimbush, as he has a hard time slowing the game down and making the right read. He needs to improve in this area otherwise defenses like Stanford and Virginia Tech will punish Wimbush and the Irish this season.

Notre Dame’s next game will be at home against Vanderbilt, who comes in at 2-0. Be on the lookout for a different approach from the Irish in this one, and hopefully a team ready to start on time.

Follow along with me on twitter @PBPNick and here on SlantSports.com for more weekly Notre Dame football recaps.