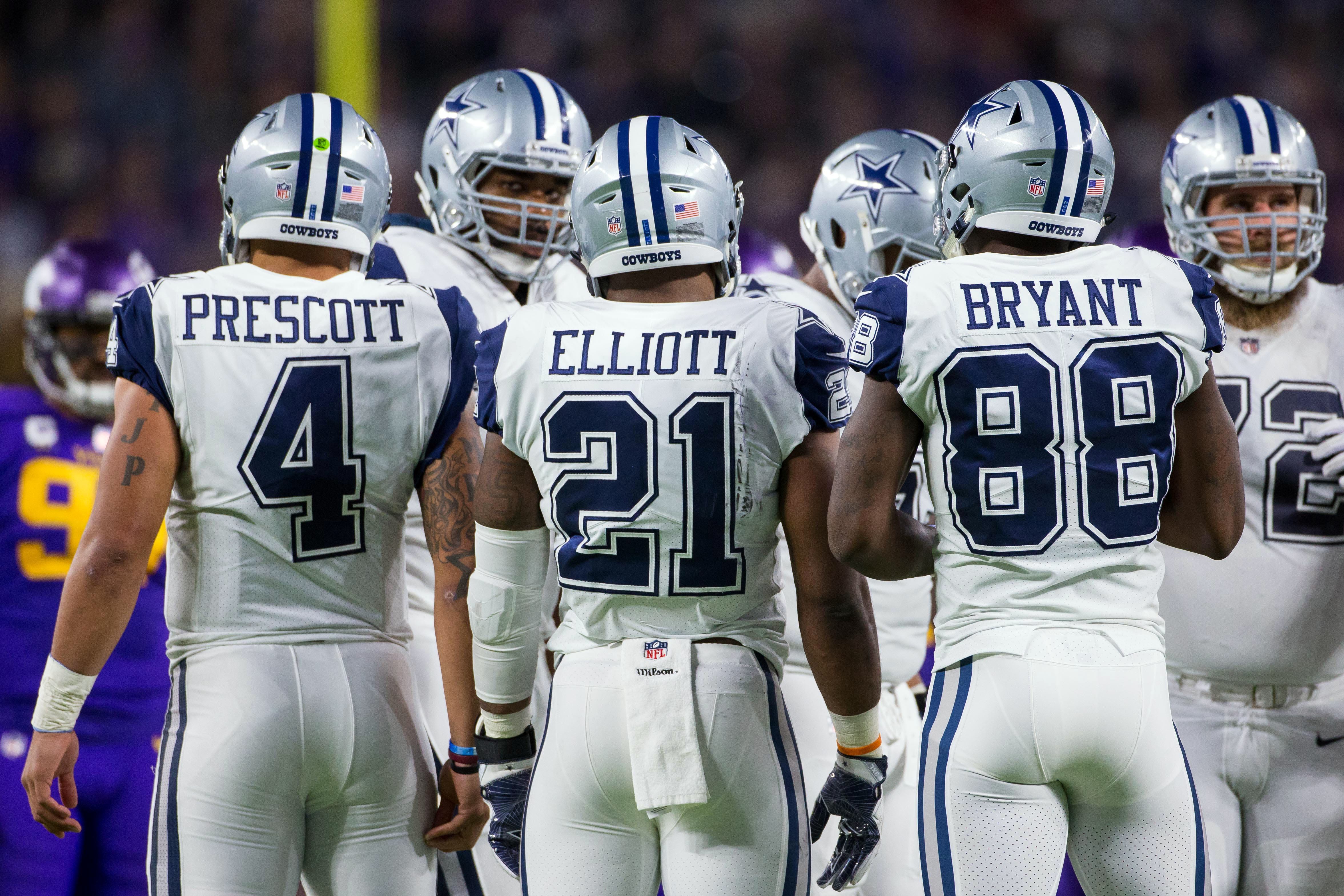 For the Dallas Cowboys and its many fans, the 2017 NFL season can’t get here soon enough. The highs and the lows of this year have been underscored with drama every step of the way, and while preseason was a nice distraction from everything else going on in Cowboys country, it simply wasn’t enough.

The Cowboys currently have three players starting the season under an NFL-imposed suspension: David Irving, Damontre Moore, and Randy Gregory. In addition to those guys, suspensions are likely to come for Nolan Carroll and Damien Wilson.

Add Ezekiel Elliott to that last group if you want, because we still don’t know if Judge Mazzant of the Texas District Courts will grant Ezekiel Elliott’s motion for a Temporary Restraining Order (TRO), and won’t until Friday.

Can Taco Charlton develop into a feature pass rusher in the NFL? How long will Xavier Woods, Jourdan Lewis, and Chidobe Awuzie be limited?

What about Anthony Hitchens and Jaylon Smith? Two of Dallas’ linebackers are huge question marks due to injury; with Hitchens it’s how long he’ll be out and before he’s back to full strength once he returns, with Smith it’s how much can he play and how vulnerable to re-injury he is.

The quarterback controversy still exists in Dallas, too. Of course it does. Dak Prescott is the incumbent starter—and rightly so—but the role of his backup is still uncertain.

The coaching staff continue to praise Kellen Moore’s acumen, his understanding of Scott Linehan’s offense, and his ability to read defenses pre-snap. But the fans have seen #KelMo enough to know what every team in the league already knows: if you have to rely on your backup quarterback to play during the season, you’re already losing.

As Tom Moore once said when asked why Peyton Manning’s backups weren’t getting more reps in Indianapolis, “Fellas, if 18 goes down we’re fucked, and we don’t practice fucked.”

Indeed, an injury to Prescott would land the Cowboys in the same situation, and Moore’s play since coming to Dallas has not been encouraging.

And in comes Cooper Rush this preseason, dazzling us all with 2nd and 3rd-string performances that have us clamoring for KelMo’s head. Fans thought it was just a fluke at first, in his performance against the Los Angeles Rams, then he reproduced his success against the Indianapolis Colts. Jason Garrett had no choice but to name him QB2 for the week 3 preseason dress rehearsal game against the Oakland Raiders. And Rush did not disappoint.

Rush quickly dispelled any notions that his successes were allowed by inferior defensive groups. His reads and accuracy were spot-on, his mistakes were minimal, and his arm-strength was more than sufficient to score multiple touchdowns. Rush finished the preseason 29 of 33 with 311 yards and a completion percentage of 87.66%. He threw for five touchdowns, zero interceptions, and lost one fumble that many are hard-pressed to place squarely on his shoulders. And he even bounced back from the botched snap with a convincing scoring drive.

Fans now can’t understand how the Dallas Cowboys’ official website shows Kellen Moore ahead of Cooper Rush on the depth chart. As the league’s cut-down day from 90 men to the final 53-man roster ended without Moore on the team, fans were happy. Hell, they were elated.

Never mind reports that the Cowboys were doing some maneuvering with Moore, meeting requirements to allow TE Rico Gathers to be reactivated from Injured Reserve this season. Most either missed that news or dismissed it, but come Tuesday following cut-down day, Gathers was on IR and Moore was a Dallas Cowboy once again.

The wide receiver group is perhaps the most stable position on the team, possibly only second to center, which Travis Frederick has locked up tight. Dez Bryant, Terrance “Screw the Game Clock” Williams, Cole “The Bease” Beasley, and Brice Butler are certain. Rookie Beasley-clone Ryan Switzer also made the roster and is depth-charted as the primary kick/punt returner, but his contributions on offense are as of yet still undetermined. Not to mention rookie Noah Brown, the team’s sixth wide receiver this year.

Dez has battled injuries for a couple of years, playing more games than he’s missed, but being less-than-100% more often than not. Williams seems to have improved his hands a bit, judging from this preseason, but is still a question mark anytime the ball goes his way. Beasley is the King of the Slot. Brice Butler is a big, physical receiver with enough speed to cause problems for coverage units, when he can stay on the field.

Hey, Brice? Having the speed to get 30-yards down-field to beat the coverage and make the catch is great, but not so great if you come up lame from the run because you didn’t stretch or stay properly hydrated. Just saying, bro.

At running back we have Ezekiel Elliott as his aforementioned baggage, Mr. Still-don’t-know-if-he’s-a-bust-or-not Darren McFadden, the try-hard former Redskin Alfred Morris, and Jaylon Smith’s brother, Rod Smith, who has impressed during preseason.

So many people are really low on McFadden, but I was yelling every week for him to take over in 2015, and again in 2016 anytime Morris had the ball. He’s solid, not yet 30 years old, and he’s not in Oakland anymore.

The Cowboys are good for week one against the Giants with Elliott cleared to play, but we won’t know until the end of this week about his TRO, which—if granted—would presumably allow him to play all of 2017 before that whole ordeal is concluded. In that case, running back isn’t really a concern. But it’s a big question mark right until we get more answers.

On the offensive line you’ve got Tyron Smith with nagging back spasms that look certain to be chronic at this point, Chaz Green and his never-ending string of injuries, The Beard King himself, Travis Frederick, the too-good-to-get-paid-yet Zack Martin, and Mr. Undrafted-first-round-talent La’el Collins.

Okay, Chaz Green, what the hell dude. Are you allergic to water? Is your gym a giant Ponzi scheme that’s never actually open? Condition yourself, brother! I’m not upset about Jonathan Cooper taking over for you mid-game this week, but I would really like to see the badass the coaches keep saying you can be when healthy. Let’s make that happen.

Smith’s back problem bothers me. He’s a great left tackle, no doubt about that, but he’s now crossed into the territory of unreliable. It’s not his fault; he’s a big guy with a demanding job, and his back is just throwing little fits, but if you’ve ever had back spasms before then you know why he isn’t out there as often anymore.

Zack Martin is Zack Martin. There’s not much else I can say about the dude. Yeah, he and the team put a pause on negotiations for his post-rookie contract extension until after the 2017 season, but that’s not unheard of. It’s tough to maintain focus during the season when you have contract talks to deal with too. I sincerely doubt the Cowboys are trying to go cheap on him, but I do suspect this is going to be a blockbuster deal and that much money always requires more diligence. I wouldn’t be surprised if Martin isn’t locked up for five or more years before week 17.

Now, on the defensive side of the ball, things get pretty darn murky.

Rod Marinelli is a great coach, you’ll get no arguments from me on that one, but if I did have any complaints about him it would have to be his constant rotation of players and schemes. I love it, it’s probably the only thing that has kept Dallas competitive these last several years, but it also makes predictions difficult.

Pay very close attention to that last paragraph. Study the names closely because you’re going to see every one of those guys playing meaningful snaps in every game this season. Guaranteed.

And the linebackers don’t fare a lot better either. Damien Wilson, Anthony Hitchens, and Sean Lee are the starting SAM, MIKE, and WILL linebackers, respectively, but Hitchens is out another 6-8 weeks with an injury and Wilson still has his assault trial and the NFL to deal with.

Jaylon Smith still isn’t 100% but he’s looking good so far and will continue to play as long as he, the coaches, and the medical trainers feel comfortable that it won’t set back his gradual recovery. So that leaves Kyle Wilber or—more likely—very aged veteran Justin Durant helping to cover at middle linebacker until Hitchens returns. My guess is that Durant will be the guy, but Jaylon will start against the Giants and get less than half the snaps.

If Wilson is jailed and/or suspended, Wilber is the guy manning the strong side. Sean Lee can play MIKE but the general consensus is that doing so is detrimental to his health, so he’ll stick with WILL.

Safety is actually a fairly stable position right now. You’ve got Byron “Jump” Jones at free safety—who spent the offseason catching anything he could get someone to throw at him in order to turn his many near-interceptions into six points—and the GOAT himself, Jeff Heath at strong safety. Kavon Frazier and Xavier Woods are the backups and should get some playing time this season. Frazier is developing well so far, and healthy, don’t forget healthy, so expect to see him some this Sunday night against the Giants.

Cornerback is a little less certain right now. Again, Nolan Carroll has yet to atone for his DWI in Dallas during the offseason, even though he’s listed at CB3 on the depth chart. Anthony Brown looks to build on his outstanding breakout performance in 2016, and veteran Orlando Scandrick finally looks healthy again at CB2.

The Cowboys acquired Bene’ Benwikere just this past weekend and he has some impressive highlights from last year, but is still an unknown. Awuzie and Lewis also fit somewhere in the mix. The Cowboys secondary doesn’t substitute nearly as much as the front-seven, so the unproven guys may have a harder time getting on the field.

That just leaves us with the special teams units. Dan “The Man” Bailey is the placekicker for field goals and kickoffs, and Chris Jones will handle punts. Ryan Switzer has the nod at returner on both units and promises to be well worth the wait from all I’ve seen and heard about him so far.

And there you have it, the state of the Cowboys right now, a few days before their season opener against the New York Giants.

I can’t say that I’m totally stoked about our chances this year, but there is as much potential as I’ve seen since I was a kid and the triplets were Troy Aikman, Michael Irvin, and Emmitt Smith. It all hinges on one thing, in my mind, suspensions.

While I think we’ll win games without Zeke, we’ll win more with him. And we need Irving and Moore back to help prevent having to outscore our opponents shoot-out style. That’s how it was with Tony Romo all those years and I loved it, I’ll always remember Romo fondly, but man, that was stressful. But then again, so was losing two games to the Giants in 2016 by a combined total of four points.

What are your biggest concerns about the Cowboys this season?

Scroll down a bit and tell me about it with a comment.

Delivering sports news and analysis 24/7, 356 days a year. Sports covered include the NFL, MLB, NBA, NHL, NASCAR Racing, and more. Follow us on Twitter and Facebook below to receive updates of new articles in your feed.