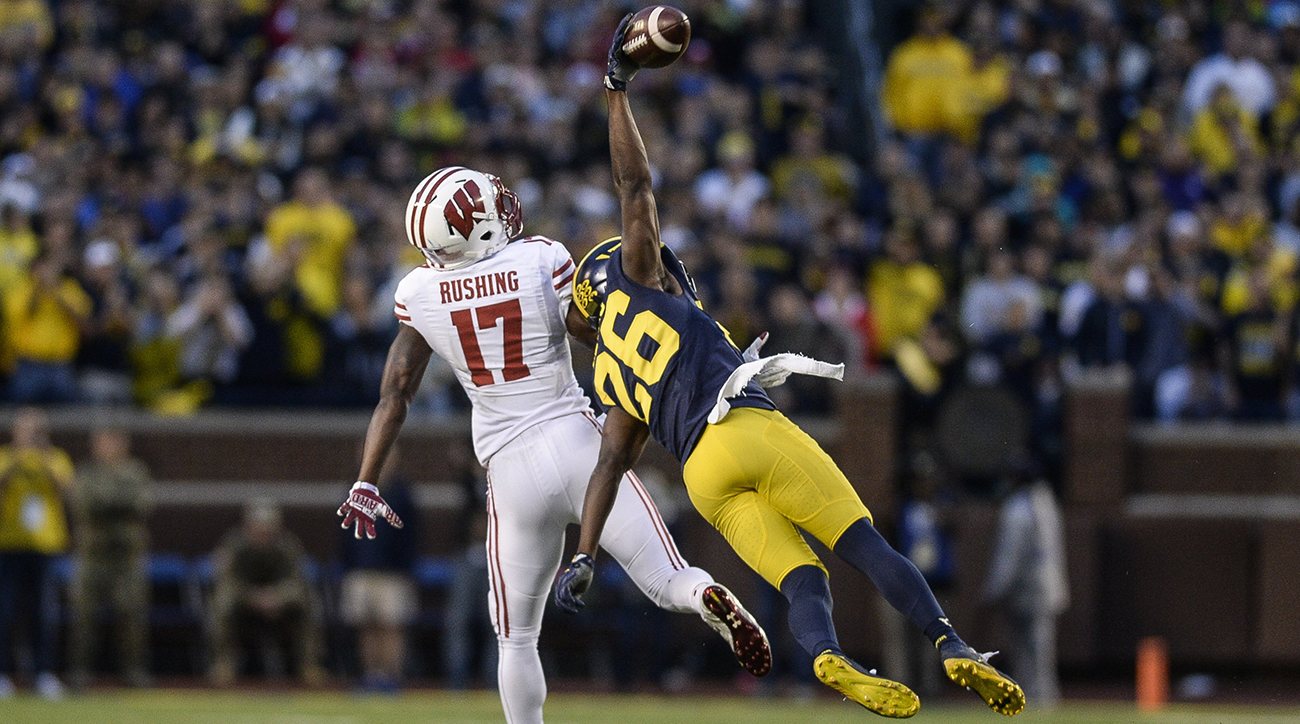 Senior Bowl cornerback Jourdan Lewis has already helped his stock tremendously at the 2017 Senior Bowl this week, weighing in at 188 pounds and measuring at 5100 with 31 inch arms. These numbers are all a win for Lewis, who entered this audition week in front of NFL scouts and coaches with concerns about his size.

Now it will be up to Lewis to put his best play on the field in practice and in Saturday’s game, something he did consistently throughout his three years as a starter at Michigan. How does Lewis’ game actually translate to the NFL though? Here is his full scouting report:

Jourdan Lewis is a smooth athlete with effortless speed that is fundamentally sound in his pedal. This is the foundation for a competitive defensive back that has played as both a boundary corner and slot corner, consistently sticking to his man with an above-average understanding of route development and breaks.

Not only will Lewis fluidly turn and run on deep routes with wide receivers, but he has the ability to remain in contact with them on inside breaking routes in addition to stop routes that force him to rally back to the football. He does the latter by using his arms to keep in contact with the WR in addition to maintaining exceptional balance – which keeps him in position to use his speed as a pass defender.

A willing tackler against the run, Lewis is a decisive player that exerts confidence in every aspect of the game, rarely letting his physical disadvantages dictate an opposing offense’s game plan to scheme against him.

As well as he sticks to his strengths and covers tightly in man coverage, NFL scouts are going to be unforgiving when it comes to not only being skeptical of his size – but pointing out the plays that Lewis in fact conceded due mostly because of it.

Even before we look at some film examples of this, you see Lewis in the above clip trusting his recovery speed a bit too much as he also gets caught with his eyes in the wrong place. Not nearly strong enough to take the WR off of his route, the ball goes over Lewis’ head – but fortunately for him goes incomplete overthrown.

Jourdan Lewis will also locate the ball in coverage late in the down far too often, which puts him in horrible positions to make a play against bigger pass catchers.

This play above was a game winning bowl game touchdown for Florida State, working against Lewis in space – which became a favorable match up throughout this night.

In zone coverage, Jourdan Lewis can also be a liability with less than ideal awareness at times, seen below blowing a coverage with the high safety that leads to another long FSU touchdown. The responsibility for this secondary bust isn’t all on Lewis, but in Cover 2 he must be able to recognize this deep route concept much sooner and get better depth in his drop – instead allowing room down the sideline with a slight hesitation.

Cornerbacks that are naturally “sticky” with the ability to run with wide receivers like Lewis are less common than most NFL teams would hope, giving him some significant value despite some clear flaws.

What Jourdan Lewis also has going for him is his technique off the line of scrimmage, which is as good as you’ll find from any defensive back in this class. An incredibly hard working player with no shortage of confidence to play this position at the next level, scouts are going to be faced with the tough evaluation of deciding which of Lewis’ weaker traits are fixable – and which are truly because of physical limitations.

In my books, a fair amount of Lewis’ shortcomings are because of his size, but he has workable upside as a slot corner if given a chance to add strength to an upper body that already measured with surprisingly good arm length.

Jourdan Lewis earns a third round grade on my 2017 NFL Draft Board.