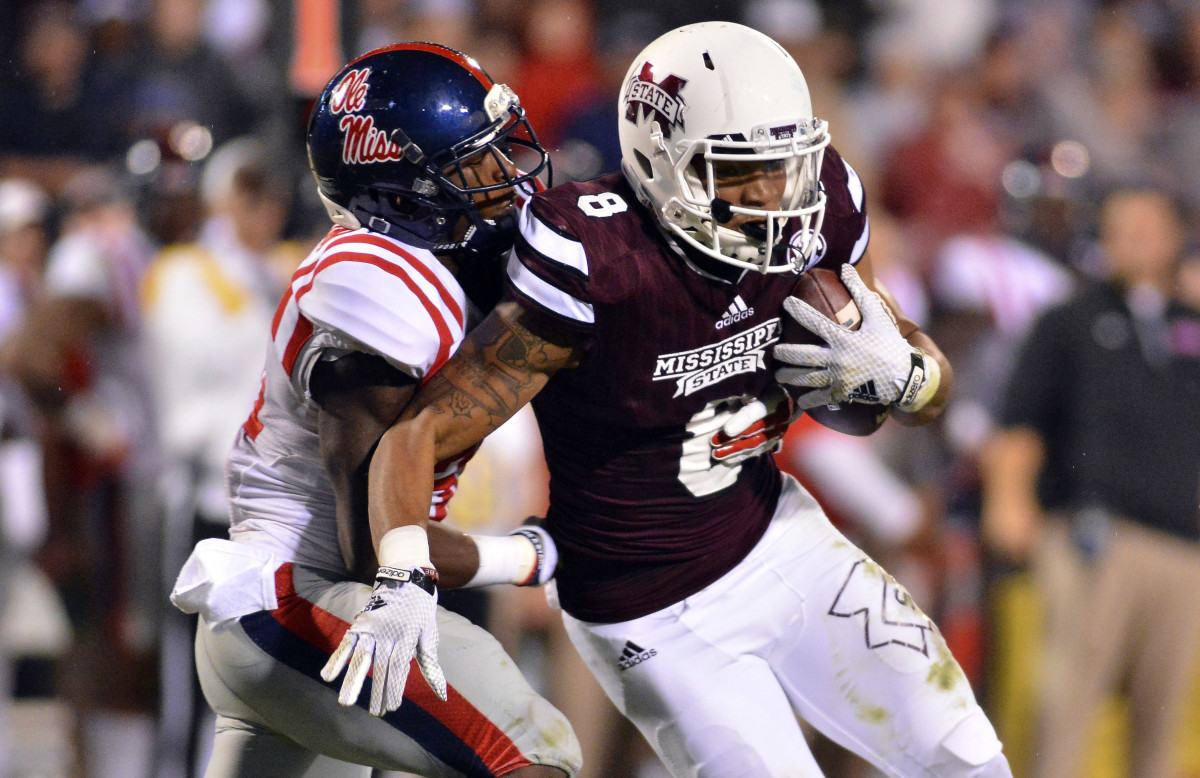 Senior Bowl WR Fred Ross improved his draft stock in Mobile, catching all five passes thrown his way for 66 yards – averaging 13.2 yards on those five receptions with a long of 27. Ross also came in with a height of 6005, which isn’t spectacular, but good enough for where he expects to have his name called.

Out of Mississippi State, Ross was a favorite target of now Dallas Cowboys starting quarterback Dak Prescott as a junior, putting together his best collegiate season with 88 catches for 1,007 yards. Ross caught just five touchdowns that season though, compared to the impressive 12 he caught as a senior – despite the struggles the Bulldogs had offensively in their first season without Prescott.

Immediately jumping out from Ross’ game tape was his running style. A long-striding wide receiver with adequate down field acceleration, Ross can separate enough to make plays like the one above, where you see him snag the ball comfortably with his hands – another very positive trait for the experienced target.

Much more than just a deep ball threat, Ross sells his routes off the line with decisive moves and head fakes like the simple one shown here. What this does – most importantly – is give Ross’ QBs a consistent target to throw to, which will greatly help Fred Ross at the next level.

Ross’ sneaky acceleration is on display here again, giving him a chance to make a play in the air – where he always approaches his targets with a needed “my ball” mentality. An all around smooth athlete that makes plays look effortless at times, Ross’ ability to not waste any space on his vertical routes should make him a guy that NFL scouts can envision a role for early in his career, even while he works out some flaws that show in his film.

Although asked to expand his route tree at times in Mississippi State’s spread offense, Ross just did not look comfortable running a variety of in-breaking routes. As mentioned, his soft hands did allow for some curl, stop, and slant routes to get thrown his way along with the go route, but even simple drag routes were difficult for Ross to execute coming across the field.

The biggest issue with Ross’ route running comes with his lack of understanding of depth, as he consistently takes himself out of plays early by easily allowing linebackers or deep safeties to cut him off or make the QB look away from him.

As you see above, contested catches aren’t a problem for Ross, which makes his inability to be a consistent target across multiple routes all the more frustrating.

Not the strongest of builds either, Ross will get pushed around a bit at the next level at the top of his routes, and did not frequently show the fluidity with his upper body to counter this. When he is able to build up some momentum, Ross’ drive with his legs is actually pretty strong both as a runner and blocker, but intermediate routes that take some time to develop could be a problem for him – his ability to run them comfortably aside.

Overall, I do see Ross as a “hidden gem” type of player in this 2017 NFL Draft at the WR position. A deep class of pass catchers, Ross merely adds to this depth by being a later round option that teams can expect to not only contribute right away but potentially show great improvements over his first seasons.

The untapped potential is there for Ross if he has the ability to learn a deeper set of routes and play progressions, but scheming him some touches while also allowing him to be targeted as a deep threat would be a nice role for Ross on a variety of teams for 2017 to start.

A lengthy and athletic build with reliable hands, Fred Ross earns a 5th round grade on my 2017 NFL Draft Board.