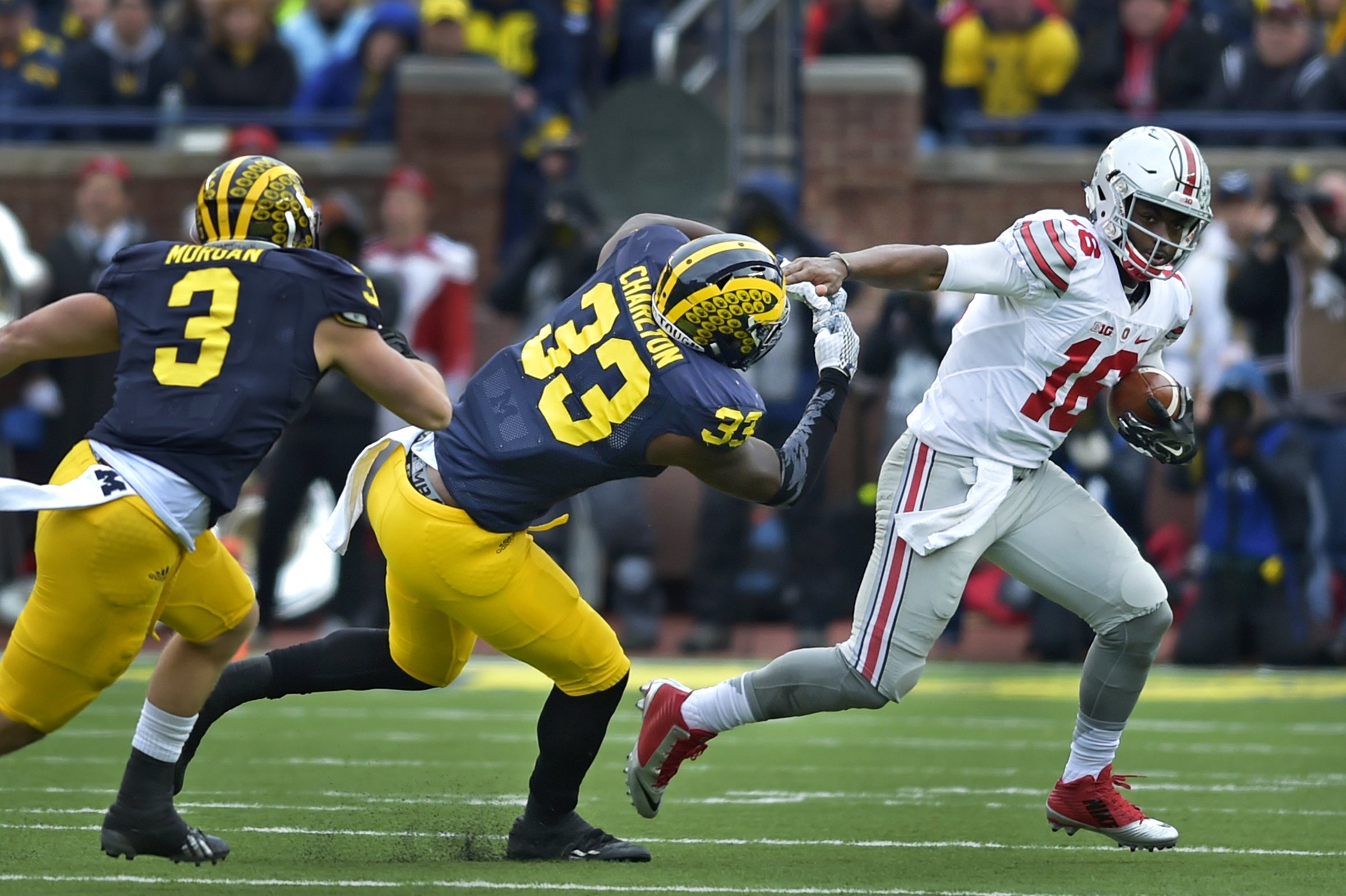 Pass rushers are expected to come off the board in waves at the 2017 NFL Draft, with plenty of talent for EDGE needy teams to choose from throughout. Michigan featured two defensive end prospects this season in Chris Wormley and Taco Charlton.

Having a breakout year in 2016, Taco Charlton surpassed his sack total from the previous two seasons with ten. Here is his full scouting report.

Taco Charlton’s flashes as a pass rusher would put him into the top tier of defensive ends in this draft – if he was consistently stable in his rush moves and play making ability.

As is, Charlton has plenty of great NFL level traits off the edge, showing developmental ability with his swim move, dip, and occasional spin. As you’ll see throughout his tape, Charlton almost always captures the edge against offensive tackles with his initial quickness and length.

In the clip above, the pulling guard has no chance to seal off Charlton once his dips his shoulder and creates a small blocking surface area. When he is able to do this, Taco Charlton consistently finishes at the quarterback with enough length to power through blocks late in downs.

Charlton is versatile enough to produce as a LDE or RDE, displaying the drive to rush off of the strong side in this clip. Unlike in the first play we looked at, Charlton fails to bend the corner as well here, which allows the right tackle to do a decent job of extending and forcing him wide.

Taco Charlton wins this rep by working his hands underneath his blocker and finding a way back to the quarterback.

In this last positive clip we’ll look at from Taco Charlton, watch how he has the left tackle beat almost instantly. What makes Charlton so dangerous is the versatility he has once he sets up a tackle like this to rush wide and bend or power inside.

Going with the inside move here, Charlton again finds a way to the quarterback with enough lower body strength to maintain his speed up the field while the tackle tries to slide him away from the ball.

As mentioned, Taco Charlton’s best traits as a pass rusher appear in flashes. Without these flashes, a deeper dive into his tape shows an inconsistent player that leaves opportunities on the field.

Pad level is the biggest issue causing these inconsistencies with Taco Charlton, as his unpolished counter moves rarely get him into the backfield once a tackle is able to get a good set against him.

Not the greatest athlete either, Charlton cannot change directions quickly to either win snaps like in the clip above or finish tackles on free runs:

When giving blockers enough surface area to block and seal him, Charlton’s lack of bend is evident. While there are rarely a plethora of EDGE prospects that possess elite bend on a consistent basis in the draft, Charlton’s ability to win without this slightly above average bend is concerning.

Taco Charlton is going to be a great addition to any defensive line, with the versatility to step in on day one and make an impact as a true right rusher or a base LDE with a ton of upside.

With the right coaching, Charlton will be able to develop his array of pass rushing moves. His best NFL-ready edge ability is Charlton’s rip move, which he should be able to pair with a more effective counter move.

Perhaps most comfortable as a left end early in his pro career, Charlton never gets washed out of plays – needing work as a run defender with his form in tackling as opposed to lunging at ball carriers.

Taco Charlton earns a 2nd round grade on my 2017 NFL Draft Board, with a high prospect floor to become an incredibly valuable EDGE addition for any team that passes on the top names available early in the first round.