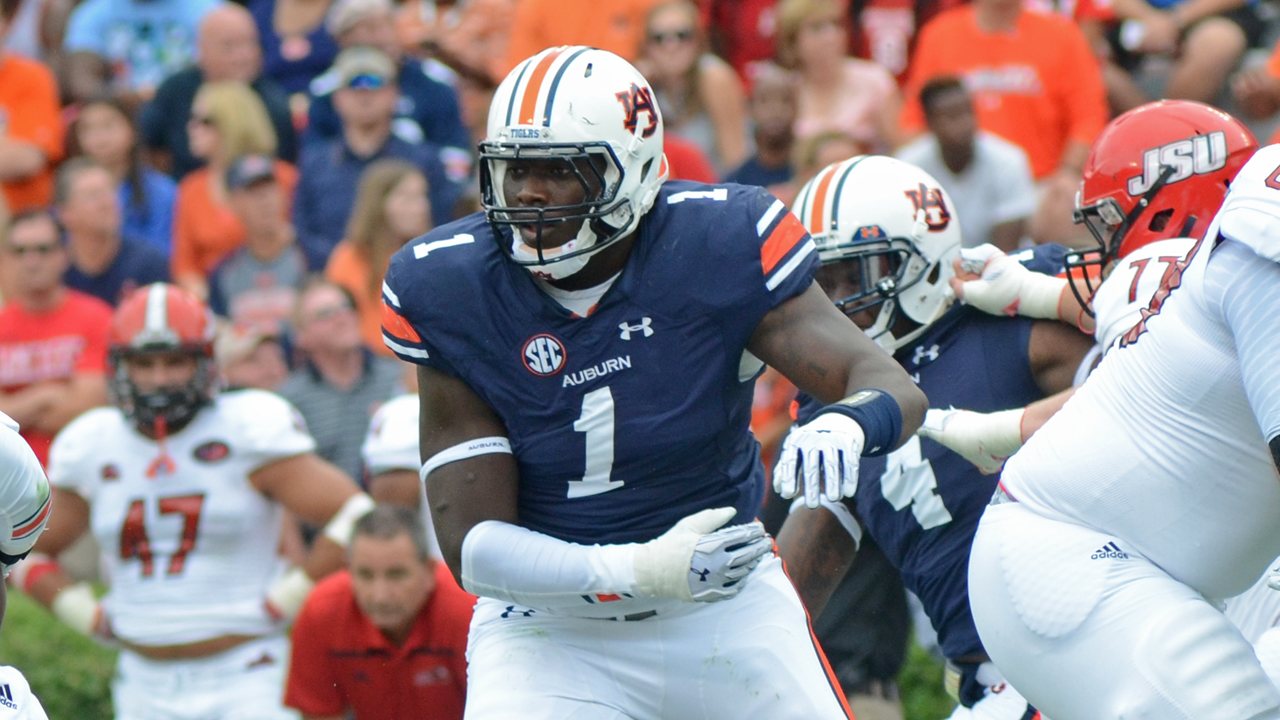 The 2017 NFL Draft features one of the deepest EDGE classes in recent memory, with top-notch defensive ends ready to rush NFL quarterbacks. On the interior, however, there aren’t as many day one or even day two defensive tackles available.

One player which has been elevated to that status by many is former Auburn Tigers defensive tackle Montravius Adams. In 13 games in 2016, Adams finished with 44 tackles, 8.5 for loss, and 4.5 sacks. For a defensive tackle, these are some really solid stats. But while the production was solid, Adams’ film was not nearly as impressive.

Listed at 6’4″ 305 pounds, Montravius Adams has the prototypical build for a 4-3 1-technique, or even a 3-4 nose tackle. He has good arm length, powerful hands, and a well proportioned physique in terms of how his weight is distributed.

When he wins, he wins this size, strength, and power. Pure brute power. He has a bulky lower body as well, helping him stalemate double teams and power through on bull rushes. Adams is also rather quick for his size. He normally plays with a good first step, and has the ability to explode through gaps, especially against slower offensive linemen.

Adams plays with a high motor as well, and repeatedly chased down plays or moved laterally to get in on gang tackles. This type of effort is good to see when you are deciding whether to draft a player, or choose someone else from his position group.

But with all of that good, comes a whole lot of bad for Montravius Adams. Too often Adams exhibits the cardinal sins of defensive line prospects; he loses his balance, and he plays with his head down.

On this play you can see both the good and the bad of Adams’ game. He has an explosive first step, and gets through his gap quickly and aggressively. However, he is out of control, and has his head down coming out of his stance.

When you combine his lack of body control with his eyes being at the turf, Adams ends up on the ground too much. For a big tackle like him, he should never get pushed around or end up on the ground as much as he does.

Outside of his balance issues, Adams struggles most with block awareness. As a one-gap defensive lineman, you must be able to read the offensive lineman who is lined up over you, as well as the player to your outside.

In this case, the center is Adams’ “read key,” while the left guard is his “pressure key.” When Adams sees the center come back and the guard bucket step to pull, he should have the awareness to work back across the centers face.

Instead, he simply works straight into the backside A gap, allowing the center to easily complete the back block. You want to fight pressure with pressure as a defensive tackle. My old d-line coach used to say, “if it feels easy, it’s wrong.”

There may have been a stunt called here, affecting Adams’ ability to freelance, but this problem happens so often that it is still worth mentioning.

On this play, we once again see both the good and the bad of Montravius Adams. He gets credited with a tackle for loss here, blowing back the offensive lineman with brute force and a powerful punch.

While the production is pretty, the process was not. Adams makes no attempt to lock out his arms, or create separation from the guard. Once in the backfield, Adams does not shed the blocker nor show any type of hand technique.

Similar to the rest of Adams’ game, his production looks good, but his process does not.

While I have seen Montravius Adams mocked as high as the late first round, I believe that he is a late day two, or day three player. I currently have a third round grade on Adams, but anticipate that he will be selected prior to my judgement.

Considering his effort, size, and strength, some team is going to bite on him earlier than my grade indicates, thinking that they can fix his technique and awareness issues.