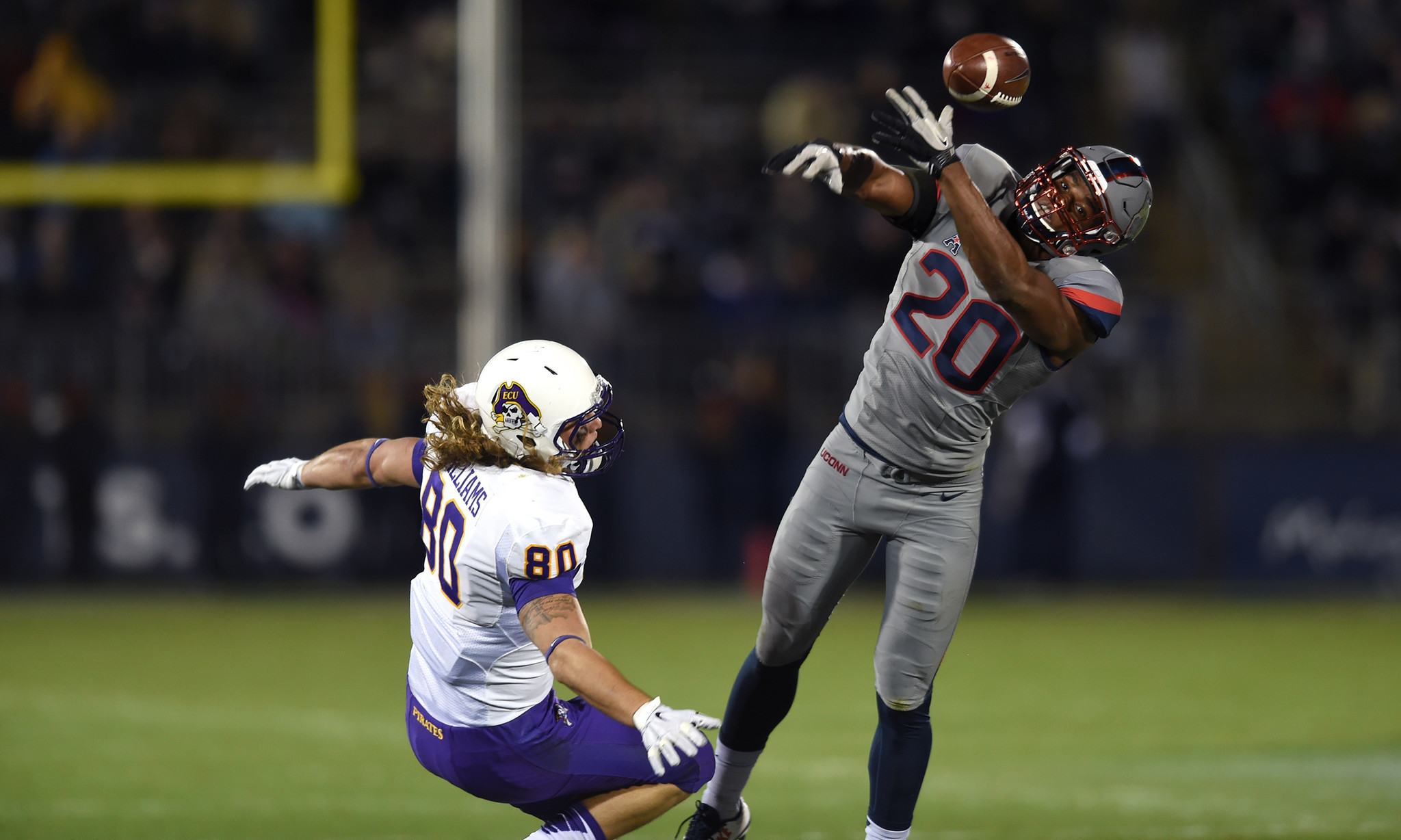 Measuring in as the tallest safety by a wide margin at the 2017 Senior Bowl (6400), Connecticut safety Obi Melifonwu did well to improve his stock while separating himself from the narrative that safeties with his height often don’t succeed in the NFL.

In studying his tape, there are certainly weaknesses that jump out with Obi Melifonwu, but they are paired with some intriguing NFL traits. Here is his full scouting report.

Evaluating safeties at the college level and projecting them to the next level is hard enough as is, with the position becoming so scheme-specific in the NFL. The versatility seen at safety is stunning, but many college teams are happy to stick some of their better athletes back there.

This was at times the case with Melifonwu, who unfortunately was not used close to the line of scrimmage nearly enough. By starting him closer to the ball, like in the play above, Melifonwu is able to use his size to his advantage and tackle with form and power.

Never backing away from a chance to make a play, Melifonwu was presented with his best opportunities to do just that as a box safety or Nickel DB.

As a deep safety, where NFL teams will likely try to tag Obi Melifonwu, there are flashes like this play. The quarterback does his WR no favors here, but watch Obi react and burst through the route to come up with a big turnover.

Rangy plays like these that show up inconsistently on Obi Melifonwu’s tape do display NFL level traits in terms of length, tackling form, and play recognition.

As a downhill run defender, Melifonwu is often a step ahead of the offense with quick recognition skills and the speed to rally to the ball.

There is no hiding that – in between his flash plays – Obi Melifonwu is affected by his size in terms of a NFL ceiling. Safeties that cannot breakdown and make this play on a receiver will be punished consistently while adjusting to the next level game speed.

While I think that this is the area of Melifonwu’s game that can be developed the most thanks to his traits as a tackler, his liability as a true pass defender from the deep safety position is worrisome.

Sideline throws like these with Obi Melifonwu trailing the play each time were far too often of an occurrence, and often resulted in explosive plays against UCONN. Melifonwu does show some ability to carry routes vertically up the field with his surprising speed, but his size once again limits him in the air – lacking the athleticism to track the ball, seal, and explode to defend at the catch point.

Melifonwu will also  get too aggressive at times in his pursuit of a big hit, not reading his keys at the second level of the defense and getting washed out.

Not a player that can start every down in the box as a safety prospect, it is very possible that plenty of NFL scouts will tag Melifonwu as somewhat of an athlete without a true position (with essentially no CB skills or tape).

Obi Melifonwu’s best pro traits are his burst as a run defender, tackling ability, and length. While not all three of these traits are on display consistently enough to make him one of the top safeties in this 2017 NFL Draft, they are good enough to earn him a spot on my draft board where teams begin to draft based primarily on desirable traits.

Obi Melifonwu gets a 3rd round grade on my 2017 NFL Draft Board, with the upside to come into the right scheme and be a physical strong safety to hopefully compliment an already athletic secondary.

If asked to take on too much responsibility at the back end of a defense early in his NFL career, the results could be disastrous for Obi Melifonwu. As a third round prospect though, a team could greatly improve their depth and rushing defense at the same time by adding this massive UCONN product.