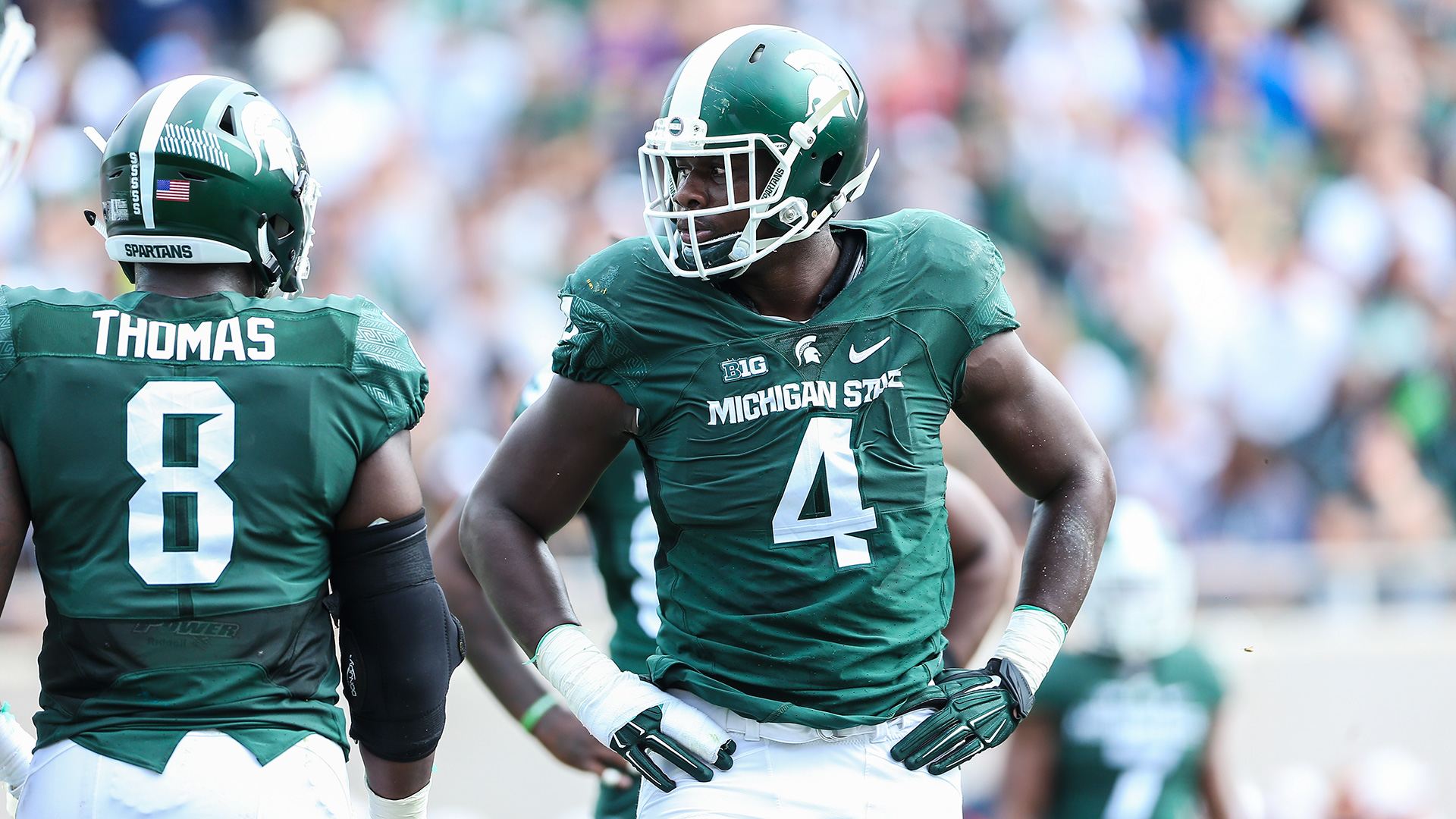 The 2017 NFL Draft is chock full of talented, athletic, and productive defensive linemen. While most of the draft pundits have focused on EDGE rushers thus far, the defensive tackle class also possesses some of this year’s top NFL prospects.

Arguably the best of those defensive tackles is Michigan State’s Malik McDowell. The former five star recruit out of Detroit, Michigan, McDowell enjoyed a productive Junior season before missing the final three games due to an injured ankle, finishing with 34 tackles (7 for loss) and 1.5 sacks.

After reviewing his film, there is no doubt that McDowell can be a star at the next level as well.

Malik McDowell jumps off the screen when watching the Michigan State defense. He has NFL size already, though he could use a little more strength in his lower body to better anchor. At 6’6″ 280 pounds, McDowell is a stout defender against the run, using his strength to overpower offensive linemen. He also has quick, active hands, and a great get-off which help him to win right from the snap.

This play is a good example of McDowell’s burst when stunting, as well as his constant disruption. McDowell is extremely effective coming off stunts, creating pressures on the quarterback and making tackles for loss against the run. Even when he makes a mistake, such as having his pad level too high, he finds a way to use his strengths to create disruption for the offense.

Rarely is he ever taken completely out of a play, as he keeps his hands and feet active through the whistle.

McDowell is also a very rangy run defender, with the athleticism to move laterally down the line of scrimmage and the arm length to keep his body clean of offensive linemen.

Here he uses his arm length to his advantage, creating separation from the offensive lineman before bench pressing him into the backfield. His arm length and grip strength allow him to control the blocker the entire time as he moves laterally. Once he forces the running back to make a decision and commit to a hole, McDowell sheds the blocker and makes a nice tackle.

While watching McDowell dominate against the run was fun, his pass rushing ability from the interior defensive line was even more impressive.

McDowell is a patient pass rusher at times, setting up the blocker how he likes and then beating them with ease. McDowell’s ability to swipe hands off helps him greatly, but his quick swim is his most effective pass rush move.

On this play he uses that swim to perfection, forcing the center to power down to the right before swimming back to the other side.

In obvious passing situations Michigan State went to a three man front, and McDowell moved out to the edge. As a defensive end, McDowell created some pressure by swiping hands and using his swim move. He was not nearly as effective outside as he was inside, but he did make plays like this at times.

Going against Mike McGlinchey, who will more than likely be the top rated tackle in the 2018 draft, McDowell does a great job of swiping hands, dipping, and ripping around the edge. Kizer steps up, however, and does his best to get away from the rush. This is where McDowell’s relentlessness and motor shine through, as he refuses to be denied his opportunity for the sack.

Okay, I’m not totally serious, but I am kind of serious. McDowell is a great prospect, and has a chance to be a Pro Bowl player in the NFL. His major weakness is his pad level. Too often he fires off high, allowing himself to get washed down the line of scrimmage by powerful down blockers.

Here we see his pad level become an issue. He must get lower on every snap, especially in situations like these where power-type runs are obviously coming.

McDowell also has the tendency to over pursue plays at times, something he will need to work on at the next level. In the play below we see him swim himself out of the play, and create a running lane through his own mistakes.

He also over-relies on his swim move. In order to be an effective pass rusher in the NFL, he will need to develop a full repertoire of pass rush moves. He also tends to bull rush guards often, which while effective in college, will be much less so against NFL talent. He does have the strength to win with the bull at times, however.

Malik McDowell has a few things he must work on, such as his pad level and lack of pass rush moves, but with his athleticism, measurables, and overall talent, he is a sure-fire first round prospect in 2017.

McDowell has the ability to play defensive tackle in a 4-3, or the 5 technique in a 3-4. This versatility will make him even more attractive to potential teams come draft day. He is currently my second highest graded non-EDGE defensive linemen behind Alabama’s Jonathon Allen.