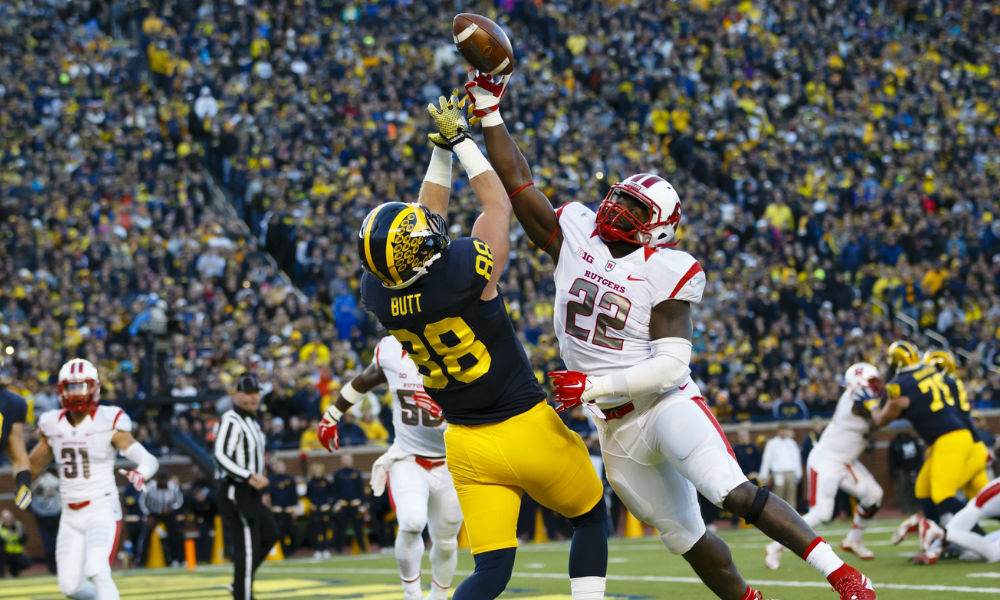 At 6’5″ and 246 pounds, former Michigan Wolverines tight end Jake Butt is poised to be selected during the first two days of the 2017 NFL Draft. Butt, who was selected to two consecutive second team AP All-American teams, finished the 2016 seasons with 46 catches, 546 yards, and 4 touchdown catches.

Originally a highly regarded NFL prospect, a torn ACL during the Orange Bowl against Florida State has pushed Butt down some draft boards.

I am not here to speculate on injuries, however, so let’s take a look at the tape and see what Jake Butt could bring to an NFL team.

Jake Butt is a versatile, modern day tight end. With the ability to line up both in-line, in the slot, as an h-back, and even as an outside receiver, Butt is able to be moved around the field and be dangerous from just about anywhere.

Here we see Butt lined up outside the far hash-marks. Running a decently smooth vertical route for a big bodied tight end, Butt beats the Indiana corner with a double move to get open deep.

While he doesn’t have the speed to create much separation, he is able to utilize his size and leverage to box out the corner and make the catch. With long arms and big, strong hands. Butt is big enough to be a threat both over the middle and over the top in the red zone.

Butt is also a very willing run/pass blocker. When needed, he does a decent job with blocking the second level as well. Countless times I saw him shield off corners in open space to spring long runs.

Here we see Butt execute a powerful down block on Ohio State’s EDGE defender, driving him down the line of scrimmage and into the ground. While he did not typically move defensive linemen off the ball, he is a smart and willing blocker who used body position to his advantage.

A smart route runner, Jake Butt finds soft spots in zones nicely. He is almost similar to Jason Witten in the sense that he is not great after the catch, but he is a savvy route runner who can get himself open. With his body frame, strength, and athleticism, Butt is a serious receiving threat for a tight end.

Here is a good example of Butt’s smart route running. Instead of stopping his route in front of the defender, he baits the defender into coming downfield before shaking him to the outside. Then, once he catches the ball, Butt does a good job of getting to the sticks.

First things first, Butt needs to improve his run blocking technique. Often times his pad level is way too high, and it causes him to get pushed around by strong linemen. He also fails to bring his hips sometimes, and will stop his feet on contact.

Butt is also not very quick, and doesn’t have the lateral quickness that most teams look for in their number one tight ends. He doesn’t possess the big play ability which OJ Howard, David Njoku, or Evan Engram bring, but he is a solid tight end in his own right.

Coming off a ACL tear in the Orange Bowl there will be questions about his health, but Jake Butt earns an early third round grade from me based off his game tape. Jake Butt can be a solid NFL tight end who plays all three downs, and has the versatility to be moved around an offense at the next level.