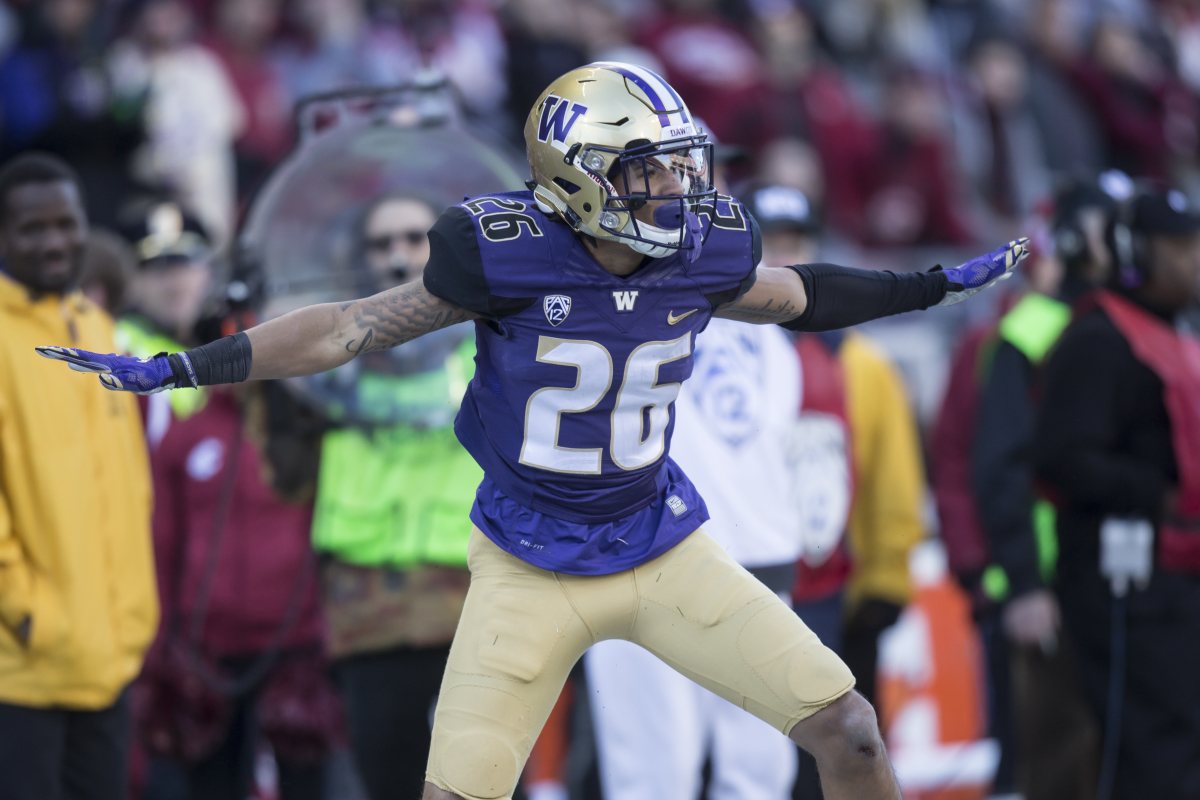 The 2017 NFL Draft’s class of cornerbacks is absolutely loaded, and in today’s pass happy league, scouts everywhere will be elated at the possibility of finding quality talent at CB through the entirety of this draft. There will be plenty of teams that go ahead and address this position in the first round, and Washington’s Sidney Jones is a name that will get plenty of consideration at the top of 2017’s elite group of cornerback prospects.

A three-year starter in the offensive fun league known as college football’s PAC-12, Jones displays all of the traits on film to become a difference maker on day one in the NFL.

Let’s look at some clips and breakdown Jones further in this full scouting report.

Sidney Jones may have a bit of a strange running style with his pedal, but it is never an issue for him when it comes to getting in position to make plays. An incredibly smooth athlete, Jones’ understanding of his own body and skill set jumps out on tape, as he consistently wins against almost any type of wide receiver.

Critical in Jones’ ability to succeed is his overall awareness. A complete player that any NFL team would love to have in the secondary, Jones doesn’t lose any speed or positioning as he reads his keys prior to rallying to the football as a pass defender or in run support.

Sidney Jones brings his body as a tackler against the run, but can also deliver big hits like the one above. Not the most explosive athlete, Jones was certainly athletic enough to star on a dynamic Washington defense full of draft talent – excelling as their top cornerback and being asked to play multiple coverages as well.

Never missing with his jam, Jones has the ability to fluidly play in press man and utilize his functional length to disrupt WRs off the line. Once he wins off the line, Jones can give ground and run with anyone while still being able to close and finish plays.

As an off-man cornerback, Jones displays some of the same physicality as he does in the press at the top of his receiver’s route. While he may not be strong enough to re-route many bigger targets at the next level, he does stick to them and cover thanks to his ability to dip his hips and remain in contact while maintaining short-range speed.

When given a chance to make a play in front of him, Jones rarely misses, and his all-around skill and confidence at the cornerback position make him a top prospect in this year’s NFL Draft.

As I just mentioned, Jones will make the plays he’s in position to make, but does at times get beat to the spot by aggressive receivers that can not only work away from him, but high point the ball as well.

NFL scouts at the upcoming Scouting Combine are going to be fascinated to see just how long Jones’ arms measure in at. While there is no concern for them to be below average, a better-than-expected number for Jones could do wonders when it comes to proving he can disrupt passes on contested catches more consistently than he did at Washington.

While this will be critical for Sidney Jones in his match ups against physical receivers, he also shows some weaknesses at times against shorter and faster targets. Particularly, WRs that are able to get low and burst against Jones off the line can win against him.

Causing Sidney Jones to fail at disrupting the route early in the down, these shifty receivers can take advantage of the fact that Jones cannot play at his top speed once his ability to translate upper body power to this playing speed is taken away.

The fans of whatever NFL team Sidney Jones lands on in the 2017 NFL Draft should be ecstatic. Jones will be a starting outside cornerback as a rookie, and one that should be expected to make impact plays in coverage – in addition to what he provides as a back-end run support CB.

With the ability to bring an all-around game to the next level, and add a welcome boost of athleticism to any secondary, Jones shows nothing on tape to suggest he won’t be getting in the faces of and defending big-name WRs.

The concerns for Sidney Jones simply come down to where his ceiling as a draft prospect will be. If he develops even further as a pass defender with the ball in the air, Sidney Jones could quickly become one of the NFL’s brightest stars at CB.

The Washington Huskies product earns a first-round grade on my 2017 NFL Draft Board.