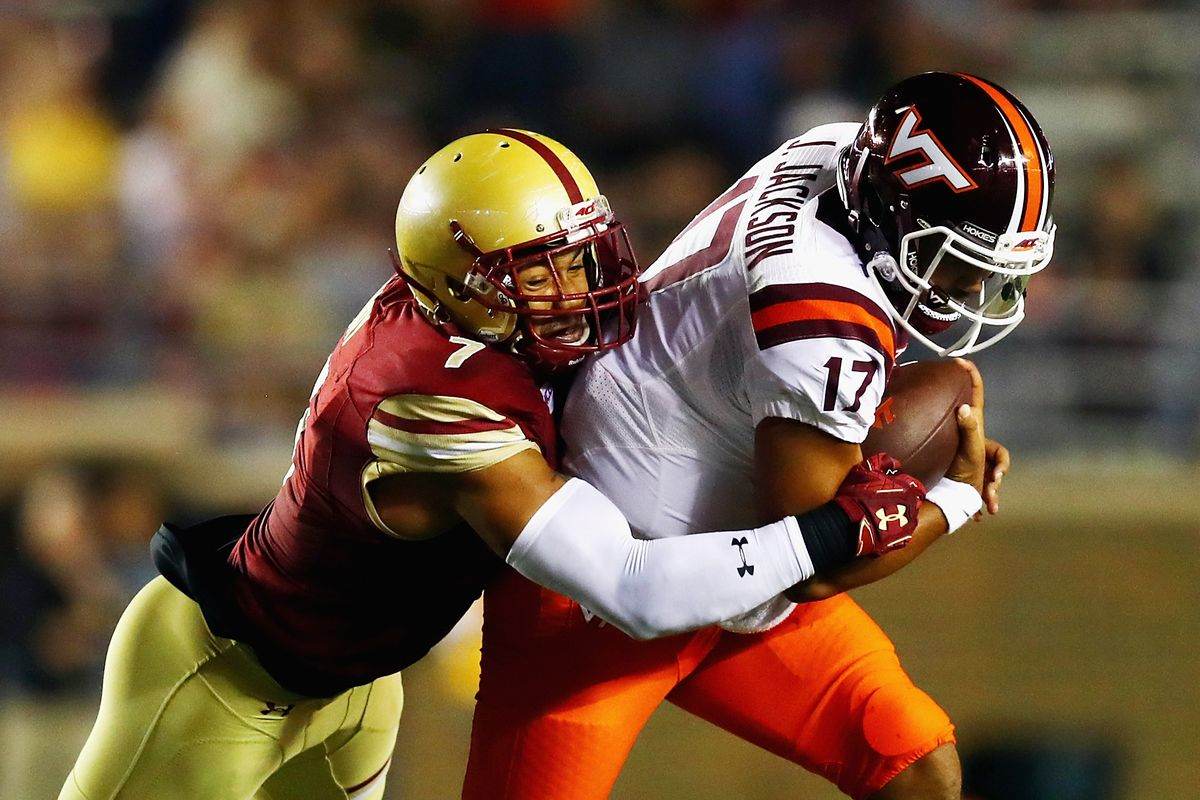 With 16.5 sacks in 2016, Harold Landry returned to Boston College in 2017 and played his final collegiate season under an intense NFL spotlight. Expected to be one of the top EDGE players in this year’s NFL Draft, Landry played through injury and produced only five sacks in 2017.

This dip in production has caused Landry’s stock to rise and fall through the early part of this draft process. He is a true case study into the constant struggle of evaluating traits while still factoring in stats.

Landry’s Combine results, displayed above in relation to average DE testing numbers, confirmed his status as a technical rusher with the ability to overcome physical disadvantages.

The best EDGE defender in this year’s draft is undoubtedly North Carolina State’s Bradley Chubb, who should go within the top five to ten picks. Should Landry remain available through the early part of this draft, he has the potential to become an instant draft steal and day one starter.

Boston College may not have done Harold Landry many favors by playing him primarily at LDE, but he was able to take advantage of smaller right tackles on plenty of pass rush snaps. At his best, Landry fires off of the ball with an elite first step, snapping back to the quarterback with equally impressive bend.

This is a square player with better-than-expected power in his hands and upper body. When looking to sharpen the corner, Landry will embrace contact if needed to get his man off balanced. Once doing so, he flashed the ability to transition into counter moves smoothly and disengage.

Harold Landry should play primarily RDE in the NFL, where his speed and bend can be used most effectively. When Landry turns his shoulders and is able to flip his hips, he bends at incredible angles to give blockers minimal surface area to attack.

Landry rushes with a plan to beat the man across from him on every snap, which may very well be his best NFL-ready trait. Lined up above at RDE, the left tackle is able to sit on Landry’s inside shoulder and – despite being completely off-balanced – seal off the edge.

Again using his hand strength, Landry turns the one strength his blocker had against him into a weakness, powering him back into the quarterback. Keeping his legs driving with light footwork and speed the entire time, Landry forced a tipped ball that was intercepted.

This same upper body control is on full display here, as Landry stacks and sheds from the LDE spot to make a strong run tackle. Putting everything together to dominate as often as he did in 2016 may have been a struggle for Landry in 2017, but he did more than enough to prove his value at the next level this season.

For every rush snap that Landry runs the arc with ease to get up the field, he’ll concede his gap with a clear lack of lateral movement ability. Flowing to the ball as a down-the-line player is not one of Landry’s strengths, as he often takes too long to fully disengage with his hands play.

When it comes to relying on physical attributes for Landry to get to the quarterback, there is some wasted movement in his transition between rush moves. As mentioned with his strengths, the alternate plans of attack are appreciated, but his overall refinement will need development.

Landry also gets caught playing too upright at times, failing to break down and tackle in space as often as every-down defensive ends have to in this league.

For Harold Landry, the current positives greatly outweigh the negatives – before even factoring in the long-term potential he has as a situational pass rusher. Landry can bolster any defensive line in his first season, with the versatility to play on both ends.

College EDGE rushers do not often come out with the level of polish Landry has, particularly when it comes to bending the corner for pressures and sacks. This makes Landry a potential long-term RDE, a position virtually every NFL team could use an upgrade at.

For these reasons, Harold Landry earns a firm first round grade on my 2018 NFL Draft Board.