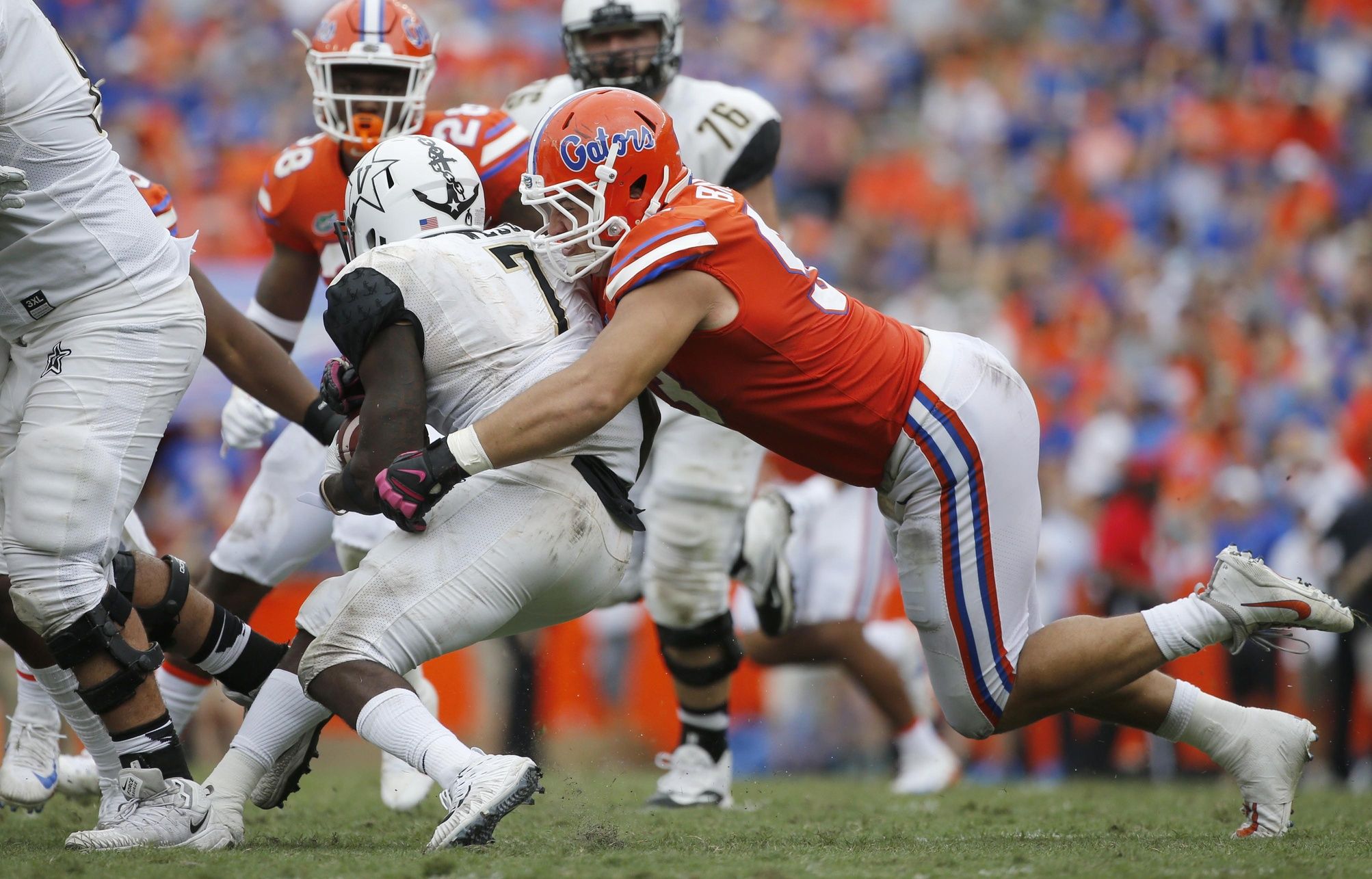 Declaring for the 2018 NFL Draft as a Junior, Florida Defensive Tackle Taven Bryan came onto the scene in the SEC this season with four sacks and 37 total tackles. Current draft projections on Bryan vary wildly, but this is one of the most disruptive interior defenders in the class at his best.

Taven Bryan projects best as a pure 3T DT at the next level, playing this position at Florida while giving opposing guards all he could handle. With a lighter but stocky frame, Bryan excels at not giving his man much of a blocking surface area – playing with good pad level and impressive bend for a DT.

Bryan also plays with enough power in his hands to knock his blockers off-balance, transitioning nicely from this position of advantage into his rush moves. Using a smooth upper body paired with quick footwork and burst, Bryan is frequently shooting gaps to finish in the backfield.

As you see here, this is a player that absolutely punishes any blocker that misses an opportunity to control Bryan’s frame. Bryan may not play with great range, but he can generate push and rush the passer from a variety of positions.

Bryan’s raw hand strength allows him to line up directly over his man and disengage, while his overall speed and violence has him ripping through gaps with enough balance to finish at the ball. The first job for any defensive lineman on a given rush is to get their blocker’s hands off of them, and when Bryan does this the results are outstanding.

This is an interior player that will bend better than some defensive end prospects in the 2018 Draft, consistently forcing quarterbacks to reset their feet in the pocket or drop their eyes into the rush.

As mentioned, Bryan is an incredibly disruptive player when he can quickly disengage and flow to the ball. This positive to his game does not come without a fair share of struggles anchoring the line of scrimmage and not getting steered.

Taven Bryan allows his frame to be controlled too often, effectively getting washed out of any play where his blocker can squat against the speed rush and shoot their hands inside on Bryan. It is also these limitations as an overpowering rusher that keep Bryan from being a true sideline-to-sideline player.

Bryan’s lateral range is severely limited, with plays spilling to his outside with ease – even when Taven is able to create some initial penetration.

Probably best described as a “flash player”, the hope for Bryan’s next team will be that they can tap into the elite potential he flashed using numerous NFL-ready traits at Florida. Earning a second round grade on my 2018 NFL Draft Board, Bryan can absolutely contribute as a rookie in the right situation.

Unleashing Taven Bryan as a gap-shooting 3T DT is the best way to see this prospect reach his ceiling, with the potential to develop into much more later in his career. Bryan plays with enough lower body strength and drive to fill in at the 1T position should he need to, adding the depth and athleticism that every team could use a burst of on their defensive front.