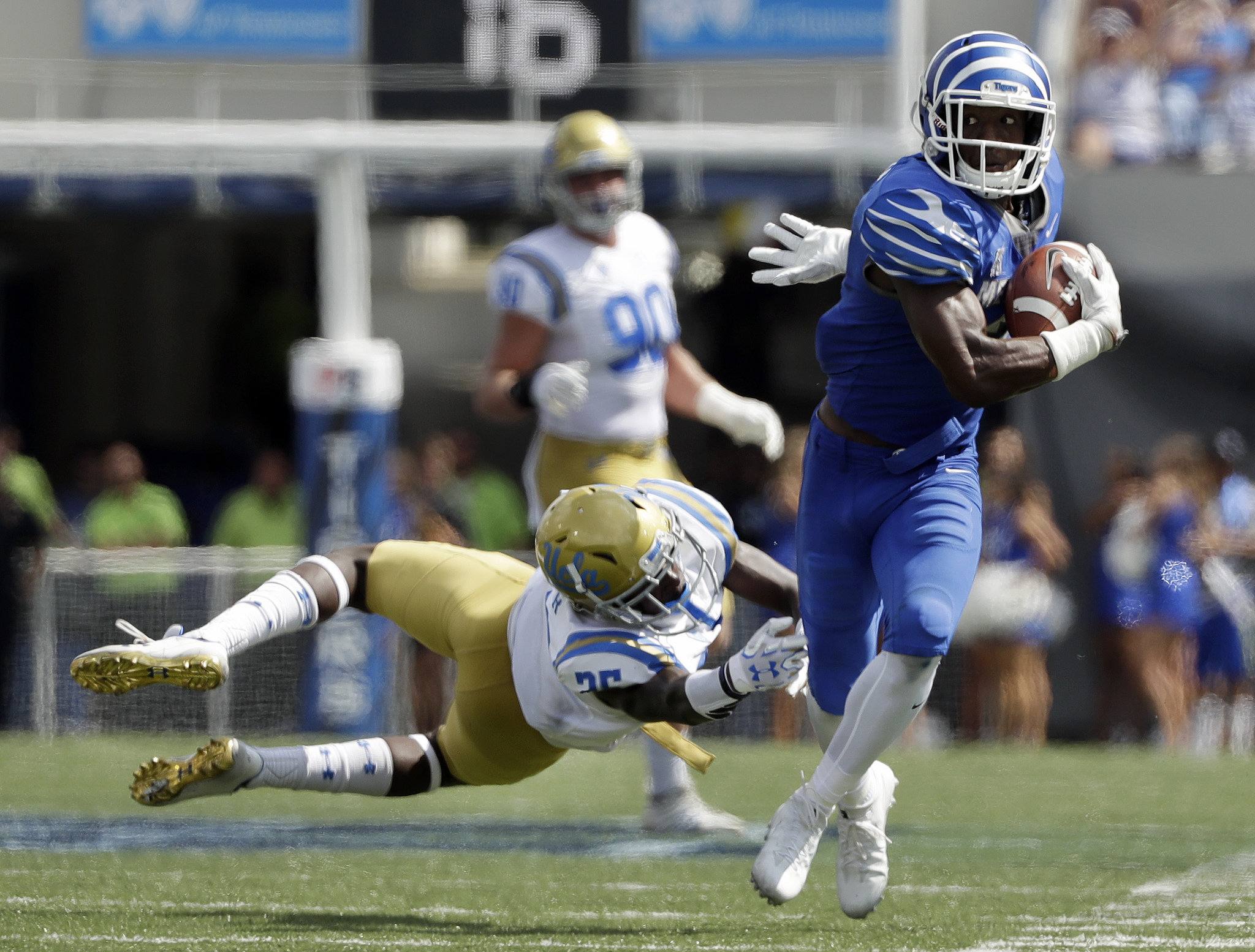 With 96 receptions for 1,462 yards and 18 touchdowns in his final season at Memphis, Senior wide receiver Anthony Miller is one of the top players at his position in the 2018 NFL Draft. These inflated numbers in the Tigers’ pass-happy offense do little to highlight Miller as a next level prospect — one that’ll be on full display for NFL scouts and coaches at the upcoming Senior Bowl.

Listed as 5’11 and 190-pounds, Miller is a complete receiver with the ability to start as either an X or Z and make an immediate impact. Here is his full scouting report.

Anthony Miller’s best trait is his ability to physically track the football through the air, also possessing the vertical traits to win “above the rim” with consistency. While he may not run away from many defensive backs, Miller is as tough of a cover as you’ll find, thanks to his explosive and concise release off the line.

With a large frame and quick feet, Miller gets on cornerbacks in a hurry, setting them up with his fluidity and size to track the football through contact.

On this play, watch as Anthony Miller loses inside leverage up the field to his defender. This forces the quarterback to hold onto the ball, but he never comes off of Miller. Anthony frees himself late in the down with his violent shoulders and jumping ability to secure a first down while wearing a Central Florida CB.

These physically dominant traits from Miller are complemented exceptionally well by the burst he shows with the ball in his hands after the catch.

I found myself constantly impressed with the speed at which Miller gets up the field when taking the ball underneath, as he wastes no time accelerating through the secondary and running with a powerful stride that makes it difficult to bring him down.

Miller is smart in his approach here, attacking the smallest openings in a defense with elite balance and vision to turn out big plays for Memphis.

Include Miller’s insane catch radius and willingness to block with some nastiness in the run game, and this is a player who deserves to have his name called early in the 2018 NFL Draft.

For a receiver as naturally gifted as Miller, there were enough plays of his on the outside where Miller allows the defender to use the sideline too easily in taking him away.

Perhaps the only thing truly missing from Miller’s game is a great second-gear to separate vertically with more ease. When you combine this with his tendency to let defenders into his frame off the line, there are lost plays for him.

Memphis was able to get Miller in space pretty frequently by both lining him up on the outside and in the slot. As an inside receiver, Miller was consistently given a free release through the second level to wreak havoc. When challenged through this area of the field though, Miller won’t always snap in and out of his routes with the decisiveness that NFL teams look for.

This allows more defenders to potentially get their hands on Miller. He embraces playing through contact, but will need to prove he can create throwing windows against tight coverage at the next level.

Earning a second round grade on my 2018 NFL Draft Board, WR Anthony Miller has plenty of time to rise further up rankings and play his way into the first round with events like the Senior Bowl and Scouting Combine ahead of him. Checking all of the right boxes as a pass catcher and blocker is already done for Miller, who must now refine parts of his game against top competition to reach his full potential as a professional play maker.

As is, he’s a freakish athlete who dominated the collegiate rankings with much more than just raw size. An instinctive player who can finish over defenders or elude them for big gains, Anthony Miller is an instant jolt of energy for any offense that adds his services at the draft.