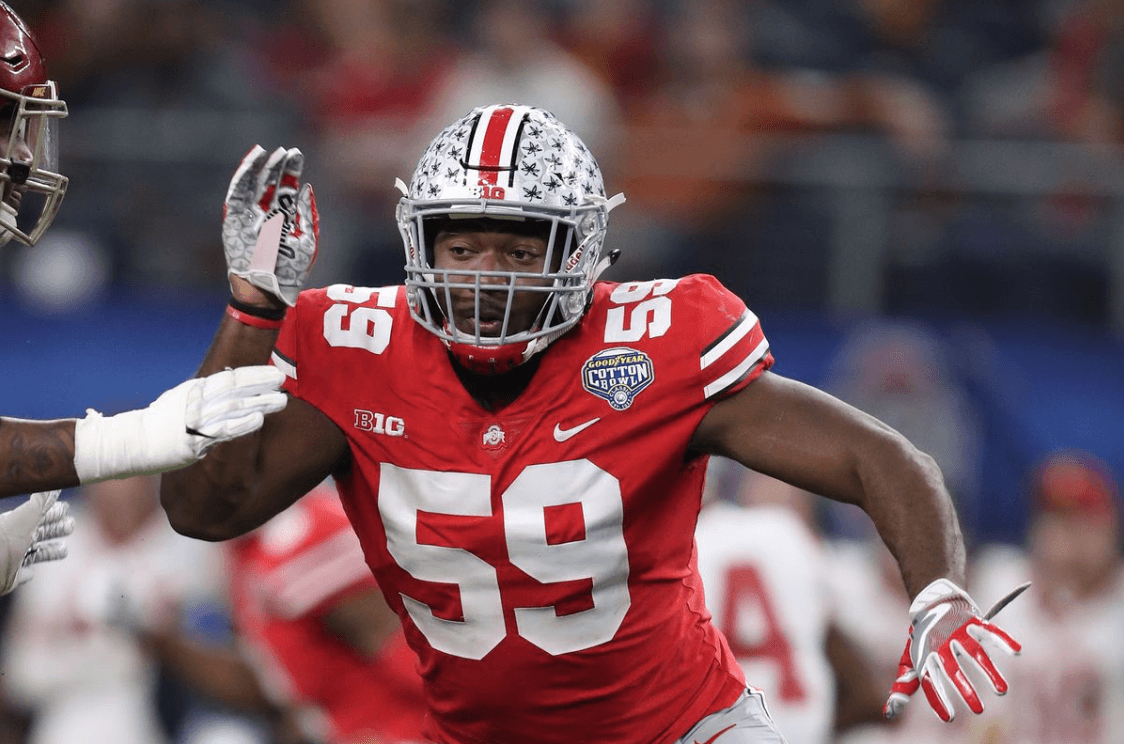 The Indianapolis Colts continued to work on improving their front lines with the 64th pick in the draft as they selected Ohio State’s Tyquan Lewis. This pick came following a trade to move back up in the order and allow the Colts the chance to add a second player at the defensive end spot, a smart choice in my mind.

Lewis is an interesting physical specimen at 6-3, 265 lbs. He tested well at his pro day with a 4.69 40 yard dash after missing almost all of the combine with the flu. Besides some nice physical tools Lewis has the ability to fit into this Colts 4-3 defense early on in certain packages. He excels against the run and he can fight his way off of a block to make a play. Lewis isn’t bad in the pass rushing department but he will need some work in that area as he doesn’t seem capable of being a featured every down rusher yet.

The former Buckeye is really intriguing pick to me given his potential to grow as a player in this league. There is an untapped part of his game that Chris Ballard is trusting the coaching staff to unlock…a recurring theme with some of these Colts picks in the draft. Lewis is definitely a player you should feel excited about and even if he doesn’t hit right away, he will be much needed depth on the defensive line. As Chris Ballard emphasized tonight to the media, the Colts pass rush needs to come in waves, and to do that Indy will need depth. Players like Turay and Lewis should go along way towards providing the Colts with that depth.

While some Colts fans were upset with the pick, Malik Hooker was certainly happy that another Buckeye will join the team.

Following making their picks Friday night the Colts brass sat down with the media to talk about their new additions. There was a clear emphasis in the war room on improving the trenches and these first five picks align with those goals. GM Chris Ballard also broke down the motivation behind selecting Braden Smith at 37, as the team felt there was a run on guards coming. Another interesting note was Ballard discussing how much Leonard stood out at the Senior Bowl. He felt that Leonard stacked up well against big time competition and not to hold his small school career against him.

Both Ballard and head coach Frank Reich seem quite confident they have the guys they want coming to Indy and that has to feel good if you’re the Colts right now. For too many years it felt like this organization was guessing its way through a draft, but not anymore. They had a clear plan of attack and executed it well.

You can see the full press conference in the tweet below.

Looking forward to day three of the draft the Colts will look to continue to bolster this roster. They entered this draft needing players at almost every position. They have picked a nice mix of early contributors and some longer term projects that were worthy of an investment. On day three I would have to think the Colts look to add some skill position players, particularly at wide receiver and running back. Quenton Nelson’s Notre Dame teammate Josh Adams could be in play at the running back spot as well as Miami’s Mark Walton. Receiver wise be on the lookout for Oklahoma State’s Marcell Ateman and Penn State’s DaeSean Hamilton, two of the most underrated receivers in this class.

It’s been a fun draft so far, not just for the Colts but for the whole league. The picks have brought a lot of intrigue and the cities of Dallas and Arlington have done a brilliant job hosting the event. The NFL’s great fans have brought energy and passion to the proceedings like never before. This is something I will touch on in a piece over the coming days. Enjoy rounds 4-7 and follow along with me live from Dallas on twitter @PBPNick.