It’s Time to Rebuild: Who Should the New York Mets Keep? 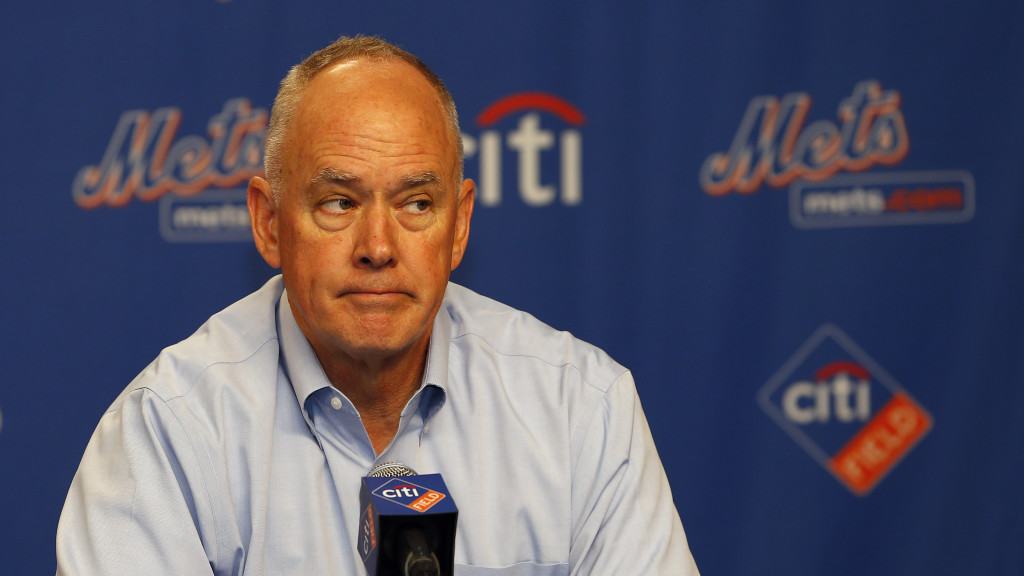 Normally when a pitching staff strikes out a team 24 times in one game they are expected to win, right? Well, when the Mets accomplished this task against the Chicago Cubs lineup this past Saturday night, they still found a way to lose the game.

In fact, if it wasn’t for one bad pitch from Cubs Pitcher Mike Montgomery, which Michael Conforto sent into the seats, the Mets would have been one hit from a score of 1-0. Instead, they just waited until the 14th inning for Buddy Baumann to blow the game while the Mets provided zero offense all night long.

As if that wasn’t bad enough, the Mets also found a way to get swept four straight this past weekend as the Cubs outscored the Mets 21-6 in the series. The Mets were also held to one run in their last 24 innings.

The Mets now find themselves under .500 for the first time all year (believe it or not) and they are 2-9 in their last 11 games.

If what happened this past weekend wasn’t the last straw for Mets’ fans, management, ownership, and everybody in between, then nothing is. When you don’t have any answers on how the season can be saved, it’s time to start over. Even Manager Mickey Callaway has no idea how to fix their problems, specifically their offense:

In order to do this correctly, General Manager Sandy Alderson and Special Assistant Omar Minaya need to figure out the right pieces to keep and who has the most value to trade without combining the two. In this post, let’s focus on who the Mets should keep if the rebuild were to begin following the trade deadline in July.

While it may not seem like there are many pieces that can help this team in the future, they do have hope in some of their young players that can possibly help this team start the rebuilding process.

With that being said, here are the players that the Mets should keep for the long rebuild if it were to happen in 2018.

In case anybody doesn’t know this, Jacob deGrom is one of (if not the) best pitchers in the National League at the moment. While his win total may not speak for it, the rest of his numbers do.

Currently, deGrom is on pace for one of his best years as a pro.

He has the lowest ERA in the National League at 1.49 ERA, 98 strikeouts (including 13 from Saturday night) which puts him tied for second most in the NL, he has given up 13 runs, and he is 4-0 on the season. The problem is, he started 12 games and has eight no decisions.

deGrom is on pace for a spot on the NL All Star team, he is in contention for the NL Cy Young award, and nobody has even noticed the season he is having. That is because the Mets offense and their bullpen performs so poorly in his starts nobody is paying attention to how good deGrom really is.

From the time he was drafted, to his debut in 2014, to winning rookie of the year in 2014, to his success in the rotation ever since, deGrom has been and is going to be a valuable piece on the Mets for years to come.

One of his first performances where Mets’ fans knew he had arrived was in a game that didn’t even count.

In the 2015 All-Star game in Cincinnati, Ohio, deGrom came into the game for the National League with the American League up 3-1 and struck out the side ending the inning in 10 pitches.

deGrom is somebody who will be relied on to win big games in that starting rotation and somebody you want to lock up long-term when the time comes.

The good news for the Mets is that doesn’t have to happen until 2021 when deGrom becomes a free agent. This gives the Mets time to build prospects around him and sign stronger talent as well so when it’s time to lock up deGrom long-term, whether that be in 2021 or earlier, you are able to do so.

Noah Syndergaard comes as a package deal with deGrom as these two must be kept in the Mets’ rotation at all costs.

Syndergaard has been one of the Mets’ best weapons since he was called up in 2015. From pitching in every big spot, to becoming a leader in the locker room, all the way to his almost dominating pitching, Syndergaard is a piece of the Mets that must be kept for the rebuild.

To this day, he is still one of the best trades in Mets history when Alderson acquired him and Travis d’Arnaud from the Toronto Blue Jays for R.A. Dickey in 2013.

Syndergaard responded well this season just one year after an elbow injury which basically kept him out the entire season, and before landing on the disabled list again in May with a strained ligament in his right finger, he looked to be having a promising season.

Syndergaard posted a 4-1 record with an ERA of 3.06. Syndergaard also recorded 76 strikeouts on the season. Expect Syndergaard to be a big piece of the rotation once he comes off the DL, which should be in the next few weeks.

Along with his positive numbers, Syndergaard has shown in years past that he can pitch in big spots, whether that be in late September or in the postseason, he can be relied on.

Take the 2016 season for example. It was in 2016 when Syndergaard (the only healthy starting pitcher left besides Bartolo Colón), along with many others like Yoenis Céspedes, José Reyes, and Asdrúbal Cabrera lifted the injured Mets to the National League Wild Card game where Syndergaard dominated the San Francisco Giants lineup through seven strong innings, striking out 10.

Having Syndergaard on the team long-term is another must that Alderson must make sure happens, and he won’t have to make sure of that until 2022.

Thor has said he wants to be a Met for life, so make it happen, because he needs to be.

NOW, HERE IS THE SITUATION THE METS COULD FACE

If they are offered the world for deGrom or Syndergaard, do you trade one of them?

If you are Sandy Alderson, you have to keep both at all costs, but if there is an offer on the table for one of them that you can’t refuse, you need to pull the trigger and ship one of them.

Obviously it’s a different sport, but a good example would be the 1989 Herschel Walker trade between the Dallas Cowboys and Minnesota Vikings in the National Football League. The Cowboys received five players and six draft picks and were loaded on both sides of the ball, which led to their success in the 1990s.

The point is, it would have to take something like that for the Mets to trade deGrom or Syndergaard. but if it would guarantee them a future within the next 2-3 years and it’s an offer that you can’t refuse, then Alderson needs to make the move on one of them.

This one everybody is going to have a different opinion on for a lot of reasons. But, Michael Conforto has shown how valuable he can be in this Mets lineup.

While he isn’t having his greatest year at the moment, that is mainly because there is nobody around him in the order. He is currently batting .238 with seven home runs and 16 RBI’s, and he hasn’t been as productive as many hoped he would be up to this point.

While he may be struggling at the moment, he has proven he can be relied on while he has been on his own.

A big example was last year when he homered 27 times and drove in 68 RBI’s before suffering a dislocated shoulder that ended his season. This came at a time where Céspedes was in and out of the lineup all year, Cabrera was hurt for a good portion of the first half, Neil Walker was hurt for a majority of the summer before being traded, and there wasn’t much in the lineup that protected Conforto in the lineup.

Long story short, Conforto has shown he can do it on his own if he has to.

In order for Conforto to be that guy in 2018, he needs to find himself and get out of his slump, which he is slowly finding his way out of batting .304 in his last seven games.

Over the course of Conforto’s career as a Met, he has hit in big spots, sacrificed his own body for the good of the team on multiple occasions, and has worn the orange and blue proudly since being called up in 2015.

To this day, one of his best days as a Met was when he homered twice in game four of the 2015 World Series against the Kansas City Royals sending Citi Field into a frenzy:

As mentioned before, there are a lot of opinions on whether it is worth it to keep Conforto in the fold moving forward. The way I look at it, he’s been one of their biggest producers over the last few years and can be that player again.

He has the ability to be their franchise outfielder for this team – whether you like it or not – and he is somebody Alderson needs to keep.

Now, there are other players to consider keeping on board as well. Brandon Nimmo and Amed Rosario, for example, are two players who can give Alderson some trouble at the deadline.

These two players are young, they have shown small doses of productivity in the past few years, and with some time they can be apart of this rebuild as well if Alderson chooses to keep them.

However, at the same time, they also provide some value if they were to be traded, much like Dilson Herrera was in 2016 when he was traded for Jay Bruce, or when Michael Fulmer was traded for Céspedes in 2015. Like Fulmer and Herrera, Nimmo and Rosario are very similar players in that regard as they can and should be traded for valuable prospects.

I will get more into details with these players in an article that will be released in the near future, but Céspedes, Cabrera, Bruce, Todd Frazier, and many others need to be traded at the deadline. While it doesn’t look like much, they can get value out of these players, especially Céspedes; the biggest thing with him is, who is picking up that contract?

Overall, it’s time for the Mets to move on from the current product they have.

With the MLB draft tonight, fans will get a first glimpse of what the future is going to look like in Queens and what direction Alderson wants to go in.

As we embark towards the trade deadline in July, Alderson, Minaya, and the entire Mets organization need to understand that this current run is finished, the team is embarrassing, and it’s time to start over. The question is, will it happen and will it happen the right way?

Do you think it’s time for the Mets to rebuild and do you agree or disagree with me on who they need to keep? Follow me on twitter @SMMcChesney to see all my Mets discussion during the 2018 season and leave a comment under this post.