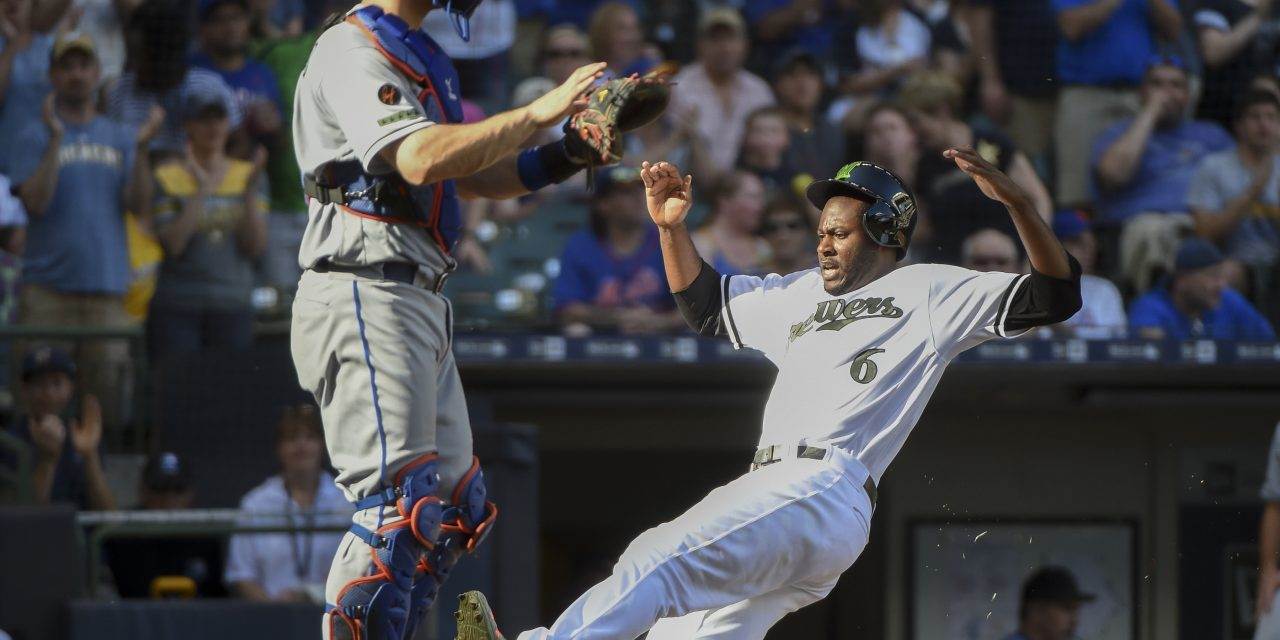 After the New York Mets swept the Arizona Diamondbacks last week, many (including myself) were optimistic saying their performance last weekend would spark some momentum against the Miami Marlins and Milwaukee Brewers this week.

That simply was not the case, in fact, it couldn’t have been more of the opposite.

As if the Marlins series wasn’t bad enough earlier this week (loosing two out of three at home and failing to score runs), it didn’t get any better as the Mets just looked flat out embarrassing loosing three out of four in Milwaukee against the first place Brewers.

Before getting into the negatives of the series, there were positives, not many but there were some. Clutch at bats from the Mets was the biggest positive I noticed in the four games.

From the 5-0 shutout on Thursday, to José Bautista’s game tying hit Friday night, to the Mets fighting back yesterday with players like Asdrúbal Cabrera and Devin Mesoraco homering, they showed life on offense.

Even Zack Wheeler got in on the offensive firepower yesterday afternoon:

The Mets showed that their offense was not a big problem this weekend and run support was not an issue to the starting pitchers.

THE BULLPEN HOWEVER WAS A DISASTER!

It started Friday night in the 4-3 loss when Bautista tied the game at three in the top of the ninth for his first clutch moment as a Met.

The issue with this was, Ramos came in and walked Hernan Perez on four straight pitches. Ramos couldn’t find the plate if he was using google maps, but Callaway left him in with the bases loaded, only for him to walk in the winning run just seconds later.

Saturday’s game wasn’t any better, and while the bullpen was bad, it was nothing compared to how bad Jason Vargas was.

For anybody that thought his five scoreless innings meant anything against the Marlins on Monday, it’s clear you haven’t watched one of his starts all year.

Vargas was absolutely embarrassing yesterday as his ERA has reached an unreal 10.62. He lasted three innings giving up five runs on six hits. The only bright side for Vargas is he didn’t receive the loss, because he wasn’t in the game long enough to receive it.

Now, the Mets were still in the game when Vargas came out, thanks to their offense. But much like Vargas’s outing, their chances didn’t last long, and that is because of the bullpen.

Jacob Rhame, A. J. Ramos, and Chris Flexen came in to “try” to stop the bleeding, but instead gave up a combined 12 runs as the Brewers dominated the Mets 17-6.

Yesterday, the Mets showed a lot of fight on offense in the second inning jumping out to a quick 4-1 lead. Wheeler would eventually give up the lead thanks to a throwing error by Wilmer Flores which led to a game-tying three run homer by Jesus Aguilar moments later:

The Mets brought themselves back into the game with an RBI single in the fifth from Jay Bruce and a solo home run by Asdrúbal Cabrera in the seventh which put the Mets up 6-4.

BUT ONCE AGAIN, THE BULLPEN COULDN’T GET THE JOB DONE!

Robert Gsellman, Jerry Blevins, and Paul Sewald came in and gave up four runs in the seventh inning and that was it for the Mets as they let another one slip away falling to the Brewers 8-7.

While the entire bullpen has been bad, Blevins especially has been a dumpster fire this year.

For those who are asking, “Why take Blevins out after one batter?” His responsibility is to come in and get the lefty out that he is facing, and no matter the result, he comes out after, that is something he has been his whole career and something he is known for. In case anybody hasn’t noticed, he hasn’t been able to execute in that spot at all this year.

This Mets team is running out of time to gather momentum and make a run. The only bright side is, despite the loss, they are still four games out of first place.

However, the bad news with that, is the Atlanta Braves are atop of the division with the Philadelphia Phillies 0.5 games back and the Washington Nationals one game back. While the NL East may not be the best division in the league, it is for sure one of the closest in the league.

The point is, the Mets’ clock is about to strike midnight. The Braves, Phillies, and Nationals have played great baseball over the course of the last month, and they don’t seem to be slowing down anytime soon.

The Mets need to find a way to gather momentum and it starts with the bullpen. How that bullpen was able to keep the Diamondbacks off the board last weekend is beyond me, but they need to find that motivation to have that kind of pitching once again.

The offense over the last four games has shown that they can compete against the top competition in the league, as they scored 21 runs against the first place Brewers.

Now, they need to start contributing against teams at the bottom of the league, like the Marlins who the Mets only got four runs against this past week.

If the offense can become more consistent against all pitching in the league, then they have a shot to stay in contention. However, one thing is for sure, it will not get easy as the Mets have a tough stretch of games ahead.

The Mets start a big four-game series against the first place Braves later today, which includes a day night double header beginning at 1:10 PM. There are a lot of issues the Mets will face going into the series.

A. J. Ramos is in New York being examined for a shoulder injury, so the Mets will have a weaker bullpen. Wilmer Flores is on his way to New York as well as he came out of yesterday’s game with lower back soreness, so now the Mets will go into the series with less depth on their bench.

Just for icing on the cake, Callaway still has no idea who is pitching game two of the double header tonight. So that goes to show what the Mets are in for physically and mentally over the next four games.

The Braves have been on such a hot streak as of late that the Mets can easily be out of contention by this weekend when they face the Chicago Cubs.

The Mets need to turn it around and quick and it starts with Atlanta. While it may seem impossible for them to find momentum against the first place team in the NL East, the Mets have to find a way.

If they can’t, the next thing that many will debate on is who the Mets need to keep and how they can rebuild, because that conversation is right around the corner.

NY Mets Get Much Needed Sweep Over Arizona
It’s Time to Rebuild: Who Should the New York Mets Keep?