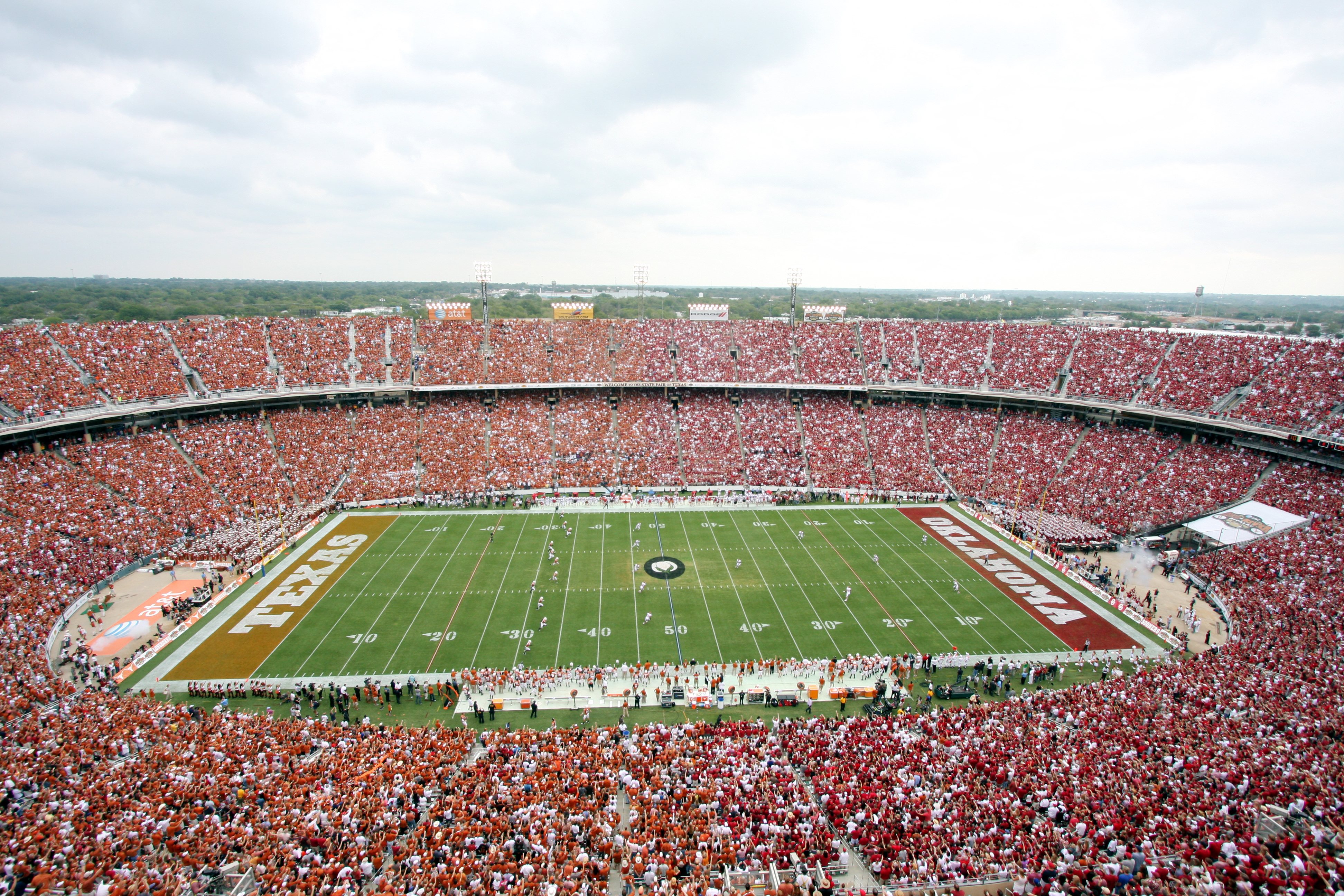 It’s that time of the year again as the University of Oklahoma and the University of Texas make their respective journeys to Dallas, Texas to take place in one of the most storied rivalries in all of sports–The Red River Rivalry.

In order to get you prepared for the 112th meeting between these two teams, I thought it would be good to get the opinion of noted Dallas Cowboys analyst and Texas Longhorns fan, Cami Griffin. Make sure to follow her on Twitter @CamiAnnG.

John (@john9williams): Seems like every year this is a big game for one of these teams. As we look into this year’s matchup, let’s first look at the most important position in football–the quarterback. The Sooners are set at quarterback with Baker Mayfield, while the Longhorns have had some question marks this season. Who can we expect Texas to give a majority of the snaps to this week?

Cami (@CamiAnnG): Although Herman is likely to remain mum on this particular topic, it has to be true freshman Sam Ehlinger behind center on Saturday.

Sophomore Shane Buechele has the experience and is arguably the better pocket passer, but he’s had ongoing issues staying healthy. Ehlinger has taken complete advantage of the reps he’s received, going toe to toe with No. 4 ranked USC in overtime then showcasing his best performance to date by beating Kansas State. In that win he became just the third quarterback in Texas history to throw for over 300 yards and rush for over 100 yards in a single game.

Ehlinger is bigger than Buechele with a sturdier frame, showing he’s capable to make crucial plays with his feet when a play breaks down. Although there will be growing pains with any true freshman, it’s been clear which of these quarterbacks has the “it” factor and has stepped up as the leader on and off the field. Ehlinger’s teammates, fans, and now coaches have seemed to rally around his incredibly tough spirit.

John (@john9williams): For Oklahoma, Baker Mayfield threw his name into the ring early in the season for the Heisman Trophy and hasn’t disappointed since. He’s completed 74.6% of his passes with a 15:0 touchdown to interception ratio. He’s still making big plays down the field and avoiding sacks, but has been avoiding interceptions this season.

With the way Mayfield and Ehlinger are playing, this has the makings of a high scoring affair. Oklahoma has struggled on defense giving up 38+ the last two games in a narrow win at Baylor and a loss at home to Iowa State. What about the Longhorns offense is going to present trouble for the Sooners defense?

Cami (@CamiAnnG): Ehlinger must continue to make something out of nothing, as the Longhorns offensive line has been derailed with injuries.

It’s crucial for this offense to sustain drives to keep Mayfield on the sidelines. Texas has had a problem finishing drives this season, in part due to an ineffective run game coupled with Herman vocally not wanting to attempt 20-yard field goals.

The wide receivers are the strongest position group on this offense, and if Collin Johnson gets into his groove it will be a long afternoon for the Sooners. The Oklahoma secondary has struggled on the perimeter this season against big-bodied wide receivers that attack the ball in the air, which is exactly what 6-foot-6 Johnson is capable of doing. Ehlinger found Johnson seven times against USC for 191 yards.

John (@john9williams): Whew! 6-6 isn’t fair. I’m sure Mike Stoops and the rest of the defensive staff will be focusing on slowing that man down, but will be unlikely to “shut down” the rangy Johnson. That’s a name I’ll be keeping an eye on Saturday afternoon.

On offense, for the Sooners, Mayfield’s favorite target has been tight end Mark Andrews. He has the ability to find the soft spots in zone coverage and then do something with the football after it’s in his hands. We’ve seen him make people miss and he’s used some physicality to move the ball after the catch. Andrews leads the team in receptions, yards, and yards per reception. Knowing that the Texas Longhorns will feature playmakers on both sides of the football, who is THE Texas defender that Sooner fans need to be worried about?

Cami (@CamiAnnG): The secondary as a whole has been impressive outside of their opening loss to Maryland, particularly safety DeShon Elliott who already has five interceptions on the season. However, I’d say you still have to go with the leader of the defense here in Malik Jefferson. The 6-3, 230lb linebacker currently leads the team with 43 tackles and five sacks. Although just a Junior, Jefferson is one of the Big 12’s top NFL prospects.

John (@john9williams): For the Sooners, it’s Ogbonnia Okoronkwo, who in 17 games, covering this season and last, has recorded 14 sacks and 25 tackles for loss as an EDGE player for the Sooners. The senior had a great junior year in 2016 with nine sacks, but looks to be making a case to be selected in the first round in the 2018 NFL Draft.

While this game will feature many players playing their final OU-Texas game, the Red River Rivalry will feature coaches making their first appearance in the Big 12’s biggest game. Oklahoma’s Lincoln Riley and Texas’ Tom Herman are in their first year at their respective programs. I think most Sooner fans are pleased with what Riley’s done so far and are optimistic for the future. What is the General feeling on Herman to this point?

Cami (@CamiAnnG): For a head coach who came in with an offensive mindset, it’s surprisingly the defense that’s made the biggest leap since Herman has taken the reigns.

This provides a breath of fresh air for a university that was once known as “DBU” (Defensive Back University), and strengthens the idea that they’ve finally found an all-around coach who will put the right coordinators around him. Although Herman hasn’t put his own recruits on the field yet, this squad is playing with much more fight and confidence than we’ve seen in previous seasons.

Texas is currently ranked No. 2 nationally in fourth-down defense and is finally forcing turnovers, recording eight interceptions on the year heading into this matchup. You can’t help but think that Herman has this program headed in the right direction.

John (@john9williams): When Texas is good, it’s good for the Big 12 and for the OU-Texas rivalry. It seems like Herman has them on the upswing at this point.

There have been a lot of great plays, breakout games, and momentum swings in the history of the game, what is your favorite moment in Red River Rivalry history?

Cami (@CamiAnnG): This is one of those matchups where you can consistently throw the rankings out of the window. It’s always a tight game full of exciting moments.

Mobilehoma just scored their second TD to go up 14 to 3. The o.u. crowd is pumped and chants “bone a sooner” (yeah, I know what it says, but I’m not saying it!). All the momentum is on the mobilehoma side. Then, the o.u.

The one that most recently comes to my mind was a kickoff return for a touchdown by Jordan Shipley in 2008. In this rivalry particularly, momentum can change so quickly from one team to the other. That’s exactly what Shipley’s 96-yard touchdown did. At the time, Oklahoma had just taken a 14-3 lead early in the second quarter. The Longhorns offense started rolling from that momentum swing that changed the entire game. Texas came away with a 45-35 victory against the No. 1 ranked Sooners.

John (@john9williams): For me it was this play from the 2001 version of the Red River Rivalry. A tight defensive game was taking place between the Longhorns and the Sooners when safety Roy Williams (also formerly of the Dallas Cowboys) flew over the top of the Texas offensive line and hit quarterback Chris Sims. The ball popped into the air and LB Teddy Lehman caught it with little difficulty and took it into the end zone.

Roy Williams seals the game for Oklahoma when he jumps over his blocker to knock the ball out of Chris Simms’ hands, and into Teddy Lehman’s.

Big thanks to Cami for taking the time to answer a few questions for us here at Slant Sports. Be sure to follow her for her instant Longhorns slanted reaction during the game, and follow me as I live tweet my overreactions throughout. Boomer Sooner!!!