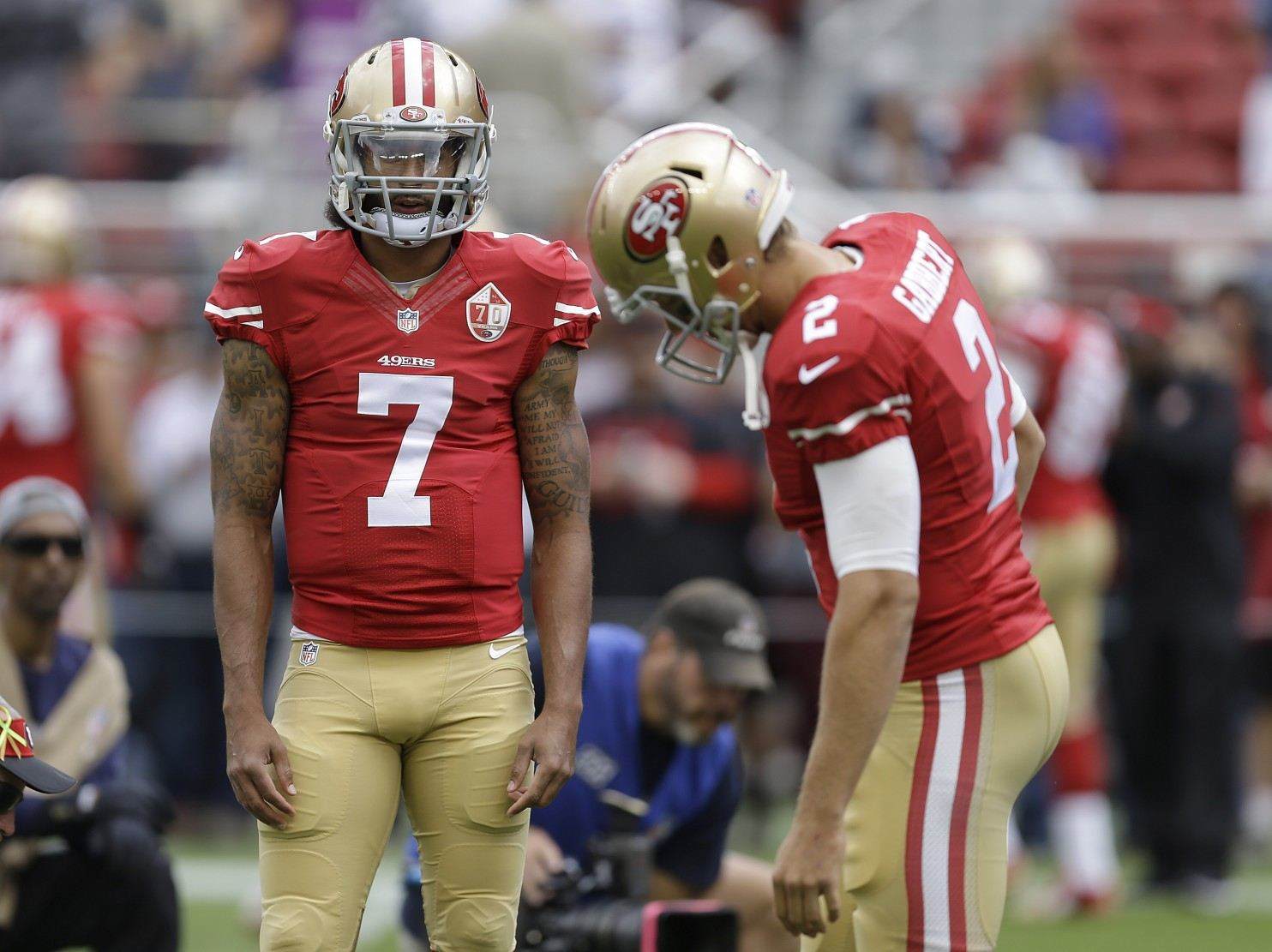 The NFL is a crazy place.

Just when you think teams are who you thought they were (shout out to the late Denny Green), they aren’t. They weren’t. They never were. It’s an ever-changing environment and atmosphere that we are constantly adapting to.

That being said, things do start to stabilize the deeper you get into a season. We’re at Week 6 now, and teams are starting to give us a large enough sample size to formulate proper opinions on them.

This is what makes picking games so much fun. Last week here at Slant Sports I went an even-steven 7/14 on my Week 5 NFL Game Picks. Let’s be better than .500 this week, shall we?

The World Champions finally suffered their first loss since hoisting the Lombardi when the Falcons went into Mile High and took down the mighty Broncos Defense. Who would have thought? Maybe Paxton Lynch since he was so terrible, but Trevor Siemian will play in this game so things are a bit different.

San Diego makes me sad. They find new, innovative, unbelievably painful ways to lose football games week after week. They are, unquestionably, the most talented 1-4 team we might have ever seen. Does it matter? Not really.

The Broncos Defense is going to regain their form this week. Von Miller is going to make life miserable for Phillip Rivers. Denver hasn’t lost a road division game since 2010 in Oakland… that is amazing.

Give me the Broncos in what is maybe the best color rush game we’ve seen yet.

While the Chargers are the best 1-4 team, it’s another California-based squad that is the most talked about 1-4 team.

The 49ers have been at the center of most media circles this season thanks to Colin Kaepernick’s National Anthem protests. This week has seemingly stoked that fire as, after another Blaine Gabbert loss, Chip Kelly named Kaep the 49ers starting QB once again.

Rex Ryan and his Bills have won three games in a row in a very quiet fashion – all without the services of Sammy Watkins. Those three games? Only the Cardinals, Patriots, and shockingly-relevant Rams. The Bills are… good? What?

Unlike the team they beat there, the Jags are coming off of a bye after a London win over Indianapolis. Was it impressive? Not really, although Allen Robinson seems to be finding his 2015 self finally; however, Blake Bortles has been far less than just decent this season. It’s tough to believe in Jacksonville after an offseason of fluff and hype.

Chicago is also coming off of a game against the Colts. It was another notch in the Bears Belt Of Sadness this season. Is there a less interesting team than John Fox’s? That’s not specific to 2016 either, that’s in general. John Fox is on a massive hot seat, and he’s not going to do himself any favors at home this week.

The Bengals are somewhat of a microcosm of this entire NFL season if you really think about it. It doesn’t feel exactly like last season because we lost some big names, but we’re trucking along anyway and things are okay. Cincinnati has got to find a way to find their last season form and do it quickly.

Tom Brady is back. He’s the best, and we all knew that. Even though Martellus Bennett is talking again, he’s also playing some elite football. This is the Patriots’ world, and we’re all just living in it.

The poor, poor Browns. They are the lone winless team in the NFL, but for some reason things feel optimistic. Hue Jackson actually seems to know what he’s doing, and Terrelle Pryor is a thing so that’s cool. The good news for the Browns is that they don’t have to play New England with Tom Brady coming back every week.

Tennessee is confusingly interesting. Their ground game is impressive, and their run defense is stout. Their greatest talent, Marcus Mariota, is so hot-and-cold that they’re tough to figure out. A home game, the Browns in town, I think we can figure out that Mariota will be fine this week.

It appears that the real Jeff Fisher is starting to stand up, and I still chose to believe in him! I hate myself.

Los Angeles had a chance to get out to an incredibly impressive 4-1 start with a win gift-wrapped for them on a silver platter last week waiting in the Buffalo Bills. At the end of the day, they’re still the Rams. It appears that the surprising success they had was short-lived and is on the way back to stabilizing.

Detroit impressively beat an undefeated Eagles team last week, so huzzah to them. Theo Riddick is one of the best pass-catching running backs in the game, and considering that Detroit just signed Justin Forsett they might be able to really get the ground game going from a complete perspective. This is a sneakily interesting team.

Martavis Bryant, Markus Wheaton, Sammie Coates, RJ Ochoa… it doesn’t matter. The Steelers, once formerly the linebacker home of the NFL, are starting to become known for the wide receivers that parade themselves through Pittsburgh, PA.

Consider that the Steelers also discovered Mike Wallace and Emmanuel Sanders. Oh and that dude Antonio Brown. These guys know wide receiver talent, and they know how to use it.

Mike Wallace initially defected from Pittsburgh to sign with Miami, who has no clue how to find, cultivate, or use talent. The Dolphins are a mess, and a date with the Steelers isn’t going to help them one bit.

I said last week that I still didn’t have a reason to pick against the Panthers, and now I do – they lost, at home, to the Tampa Bay Buccaneers. In primetime. I can’t forgive that.

Will Cam Newton be back? Probably, but that doesn’t appease the fear I have for this team. The Super Bowl Hangover is a real thing, and considering that this Carolina squad is so dependent on “having fun” – maybe OBJ will be a Panther someday? – it really isn’t best suited for them. They’re not prepared for that kind of adversity.

New Orleans is coming of of a bye after gaining Drew Brees some street cred in San Diego. I don’t have a supreme amount of faith in them, but they’re not the Panthers so I’ve got them.

The Ravens are doing everything they can to win a Super Bowl (just like every other team duh). Sometimes when you want to do something you’ve done before, you replicate the process. Last time the Ravens held the Lombardi they fired their Offensive Coordinator, then Cam Cameron, midseason. Goodbye current OC, Marc Trestman.

Marty Mornhinweg will now serve as Baltimore’s offensive play-caller, and they welcome the New York Giants to town… who have, despite spending tons of dough in the offseason, had trouble getting after quarterbacks.

Joe Flacco wants to go deep. If the Giants give him time to – and this season they have been – New York will be in trouble.

The Eagles have the toughest remaining strength of schedule across all teams in the NFL. I’ve been a believer that they’ll falter as the season grows, although Carson Wentz will continue to mature in that process. That’s how the Eagles work.

On the other side of things, Washington is going to get better as this season moves on. Jordan Reed is a question mark this week, but the Redskins Offense has potential. Kirk Cousins is getting a bit more comfortable, and I believe that they’ll continue to gel this week.

Every team in the AFC West has a division game this week, so there’s a lot on the line.

We haven’t seen the Chiefs since they were dismantled on Sunday Night Football in Week 4, and while they’ve had time to put the pieces back together this is another tough test. The key to Kansas City’s game is Jamaal Charles. Is he back to his normal self? It’s doubtful. When KC goes head-to-head with explosive offenses, they can’t hang.

Oakland has explosive offense potential. They’re not the Steelers, but Derek Carr has been marvelous (Carrvelous?) so far this season. Amari Cooper finally got on the board in terms of touchdowns last week, and Michael Crabtree is among the league’s most underrated receivers. The Raiders are making a statement this week – they’re for real and this division is theirs.

I have refused to take the Atlanta Falcons seriously for a long time. You know what Falcons fans? I was right for a good stretch there, but I am sorry. I was wrong. This team is dynamite.

Atlanta has one of the most lethal offenses in the NFL. Julio Jones can have a bad day because Devonta Freeman and Tevin Coleman will carry the load. For crying out loud, they topped the insanely talented Broncos Defense last week!

It’s not like Seattle isn’t impressive in their own right. A bye week was a big gift for them as Russell Wilson was pretty beat up entering it; however, the Seahawks are kind of like the Bengals. We haven’t seen them totally return to who we know they are. It’s curious.

I’m feeling it. I’ve been a non-believer long enough.

Well, well, well. Isn’t this a dandy of a game?

The Cowboys and Packers rivalry is among NFL History’s best, and we’re seeing a different twist to it – the Dak Prescott twist.

This could very well be Dak’s last game as the starting quarterback for the Cowboys this season as Tony Romo is rumored to be eyeing Dallas’ next game for his return. Dak, accompanied by the immensely talented Ezekiel Elliott, has been impressive at the very worst this season. The Cowboys’ league-leading, and Ezekiel Elliott’s league-leading, rushing attack will be tough to contain.

Green Bay might as well be up there with Cincinnati and Seattle as far as teams we haven’t seen totally be themselves. Sure, it’s nice to see Aaron Rodgers hooking up with Jordy Nelson, but it’s not the same. The Packers have really only faced one big test this season, the Vikings, and we’ll see how their stout run defense can hang against some fierce competition.

The Colts enter with some steam, and the Texans saw the first thread unravel after JJ Watt’s injury with their loss in Minnesota last week.

Considering the Texans Offense has really struggled – Brock Osweiler eesh – it’s hard to imagine they can go blow for blow with Andrew Luck if he gets cooking. Tough cookies.

The Jets really, really might have squandered their season when they lost Week 1 at home to the Bengals. They’ve had tough test after tough test with Kansas City, Seattle, Pittsburgh, and now Arizona on their plate. This week they put Eric Decker, the human touchdown machine, on IR… and going into the Cardinals Nest is not a good idea.

Arizona is keeping the ship afloat after a Thursday Night Football win last week in San Francisco. This is an opportunity for them to build some positive momentum with a game against Seattle next week. There’s no way Bruce Arians drops this one.

Who are your picks for Week 6 of the 2016 NFL season? Let me know! Comment below, Email me at RJ@RJOchoaShow.com, or Tweet to me at @RJOchoa!