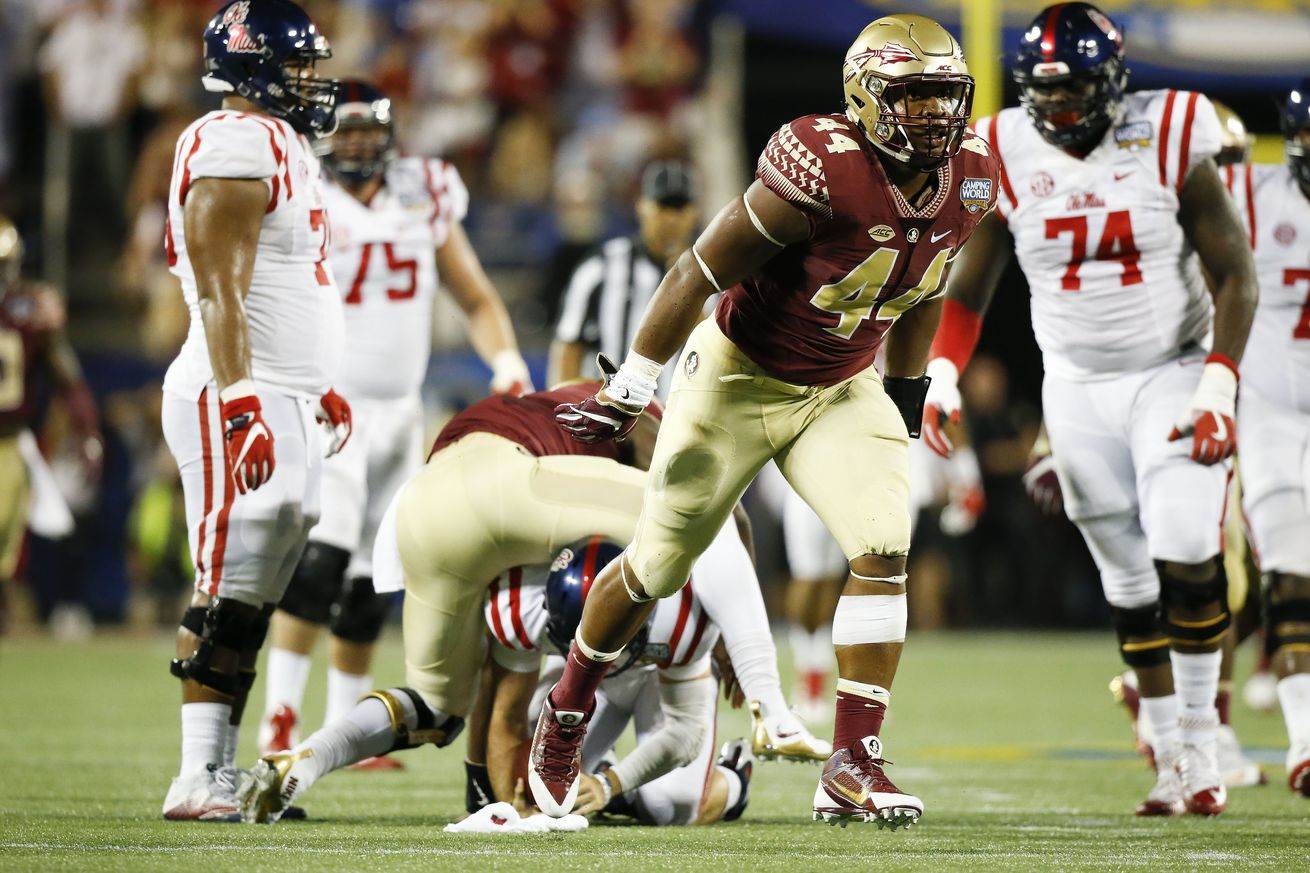 The Florida State Seminoles have produced plenty of NFL talent on the defensive side of the ball over the past few seasons, with 2017 being no exception thanks to defensive tackle DeMarcus Walker.

Walker has been graded by some as an EDGE player, but after reviewing his tape, I certainly don’t see his future being at defensive end in the NFL. Instead, the four-year player and three-year starter can become a productive player by using his athleticism and burst against guards at the 3T DT position.

Here is his scouting report as a defensive tackle:

As mentioned, Walker excels in passing situations as a penetrating defensive tackle, seen here powering through a block after getting the guard off-balanced. As an EDGE, I rarely saw Walker use any counter moves to get into the backfield, but he puts himself in much better positions to do so as a tackle thanks to his ability to win off the line.

Ideally a one gap type of player, Walker will find the ball when given the chance to and bring his strong legs as a sound tackler.

Here again against Florida, a quick swipe of the guard’s hands frees Walker up the field to finish at the quarterback.

Always seen with a low center of gravity coming off of his blocks, DeMarcus here also has to split the chip from the RB and stumbling LG as well to make this impressive play.

In this last clip to highlight Walker’s strengths, you see him once again win easily off the line to go unabated to the QB. Unfortunately, he gets held with no flag thrown, yet this highlight still displays his raw power and speed.

The obvious weakness for me when it comes to DeMarcus Walker is his inability to be a rangy run defender, limiting his opportunities to be an every down defensive tackle. If he was indeed an edge, he could get away with this by playing the strong side, but with so many NFL teams playing heavily in their “Nickel” packages it will be difficult for Walker to see the field on early running downs.

While there is still value for Walker as a rotational, pass-rushing 3T DT, plays left on the field like this become troubling.

Here, his low center of gravity actually hurts him, as he fails to break down and prevent the QB from rolling out of the pocket. As alluded to, Walker will also rarely show any effective  counter moves as a rusher, often relying solely on initial quickness to be effective.

Obviously, this quickness cannot be taught, and it is something that scouts will covet, but Walker’s grade here is also affected by his inconsistency when it comes to lower body strength. If he was able to power through more blocks (becoming a better down-the-line player in the process), Walker could easily be a first round talent with a ton of upside.

As is, DeMarcus Walker still has plenty of upside to be drafted into the right scheme and make plays. As hard working of a player as you’ll find in this deep defensive line draft pool, expect DeMarcus to impress the best he can at the Combine in an effort to improve his stock.

Having a vision for players on your draft board that you could select is so important in the National Football League, and teams will certainly have to carve out a plan for Walker to come in and develop.

Under the right circumstances, with a second round grade on my 2017 NFL Draft board, DeMarcus Walker could go down as an early steal at the 3T DT position.