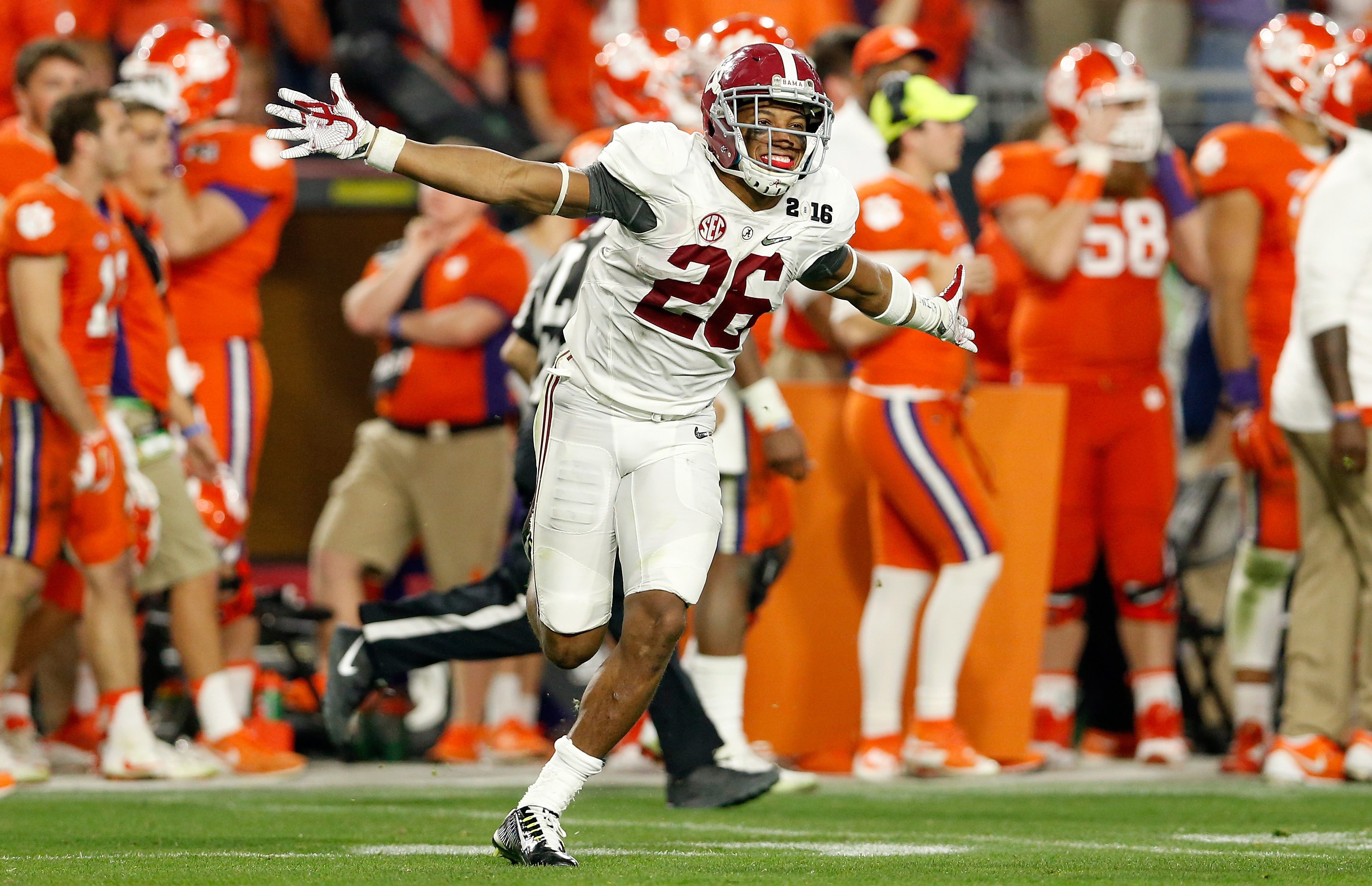 One of the marquee corners in this great class is Alabama’s Marlon Humphrey. Alabama’s defense has produced first round talents year in and year out, and 2017 is no different. While linebacker Reuben Foster or defensive lineman Jonathon Allen will more than likely be the first ‘Bama stars off the board, Humphrey has a chance to sneak in behind them towards the latter part of the first round.

Humphrey, the former five star recruit out of high school and freshman All-American in 2015, had a stellar 2016 season in which he saw his draft stock-hype rise. Let’s take a look at Humphrey’s tape, and see how he’ll project into the NFL.

The very first thing you notice when watching Humphrey is his size. Standing at 6’1″ and just under 200 pounds, Humphrey is a big, physical corner who loves to get into receiver’s bodies and hand fight.

With this size comes his willingness to come up and tackle, something many smaller corners lack. Humphrey will probably fill out to about 205 pounds, which will give him even more bulk to fight through blocks against the run and in the screen game.

Here we see Humphrey take his normal drop at first, but being cognizant of both the route combination and the sticks, he immediately drives up-field and makes a nice tackle.

Humphrey is a reliable tackler in space, and as you can see here, he relies on good technique and hitting power to bring down receivers. Many of which, when they’re coming from the slot, are smaller than he is.

Once again we see Humphrey come up and tackle, this time after fighting through a block. What I like most about this play is how at first, Humphrey is knocked off balance as the wide-out gets into his body. Humphrey then recovers nicely, keeps his hands active, and sheds the blocker.

All of this results in a tackle for loss, something Humphrey had many of during his two seasons at Alabama.

His ability to tackle is not limited to the line of scrimmage, however. In the open field, Humphrey rarely allows yards after the catch, and does a nice job of staying close to receivers at all times to minimize the damage of receptions.

The main reasons why Humphrey is such an intriguing corner prospect, besides his ridiculous athleticism, are his length and strength. Humphrey is not afraid of contact, and plays strong against physical receivers, much like many of the outside guys he would see on Sundays.

In coverage, Humphrey mainly works in man press, and uses a trail technique down the field. Humphrey normally does a good job of trailing the hip of the receiver, keeping him at an arm’s length. When possible, Humphrey uses the sideline as a twelfth defender, taking away valuable space for the throw and catch.

Here we see him against an in-breaking route. He does a nice job of staying right on the backside hip of the wide-out and flipping his hips back inside when necessary. Then, he comes away with a nice pass breakup. Humphrey played man and press coverage well at Alabama, though I’d be interested to see him in a different role in the NFL, preferably at safety.

Humphrey’s ball skills aren’t great, but he can make plays at times. Here we see him sitting in the underneath zone until he sees the ball released. Once he reads the throw, he immediately breaks to the receiver and comes away with an interception. This play only furthers my recommendation that Humphrey moves to safety.

As I’ve pointed out, Humphrey is good at a lot of things. Most of his problems, though, begin once the ball is in the air. Humphrey is awkward when looking over his shoulder to defend a pass, and he often misplays the ball on down the field throws. He is also slow getting his head around at times, which leads to troubles locating the football and losing his man.

He sometimes looked flat footed in his back pedal, and he has stiffer hips than the other round one corners in this draft class.

This is a weird play due to the offsides, but you can see the stiffness in his hips. He doesn’t flip his hips or move his feet exceptionally quick on this play, and it can get him into trouble against more dangerous route runners.

These problems can result in results like this, as Humphrey is clearly beat down the sideline. When the receiver can get a clean release off the line of scrimmage, and avoid his long arms, Humphrey’s deficiencies are evident.

Humphrey tends to be physical with receivers, and likes to push, pull, and grab at times. When you couple these tendencies with his lack of awareness with the ball in the air, he could be drawing a lot of flags at the next level.

I think Marlon Humphrey can be a good cornerback in the NFL. However, I think he can be an even better safety.

Marlon is at his best when everything is in front of him, and he is asked to come downhill to make plays. He is athletic enough to be that “last line of defense” and run with any receiver. He is also reliable enough as a tackler to play safety in the NFL, considering how he is the best in the country at fighting through blocks, and has the best hitting power and tackling technique of any corner I have watched thus far.

However, when he has to play with his back to the ball, he struggles. He tends to be late getting his head around, he panics a bit and gets too “handsy” at times, and is susceptible to getting beat in these situations.

The always reliable Jonah Tuls of DraftBreakdown.com was the first I saw to suggest the move for Humphrey back in early January, and I could not agree with his assessment more.

If Humphrey is brought into the right situation and allowed some position versatility his first year or so, I think he can develop into a very solid professional player. The transition won’t be easy, but with his skill set, it is definitely possible.