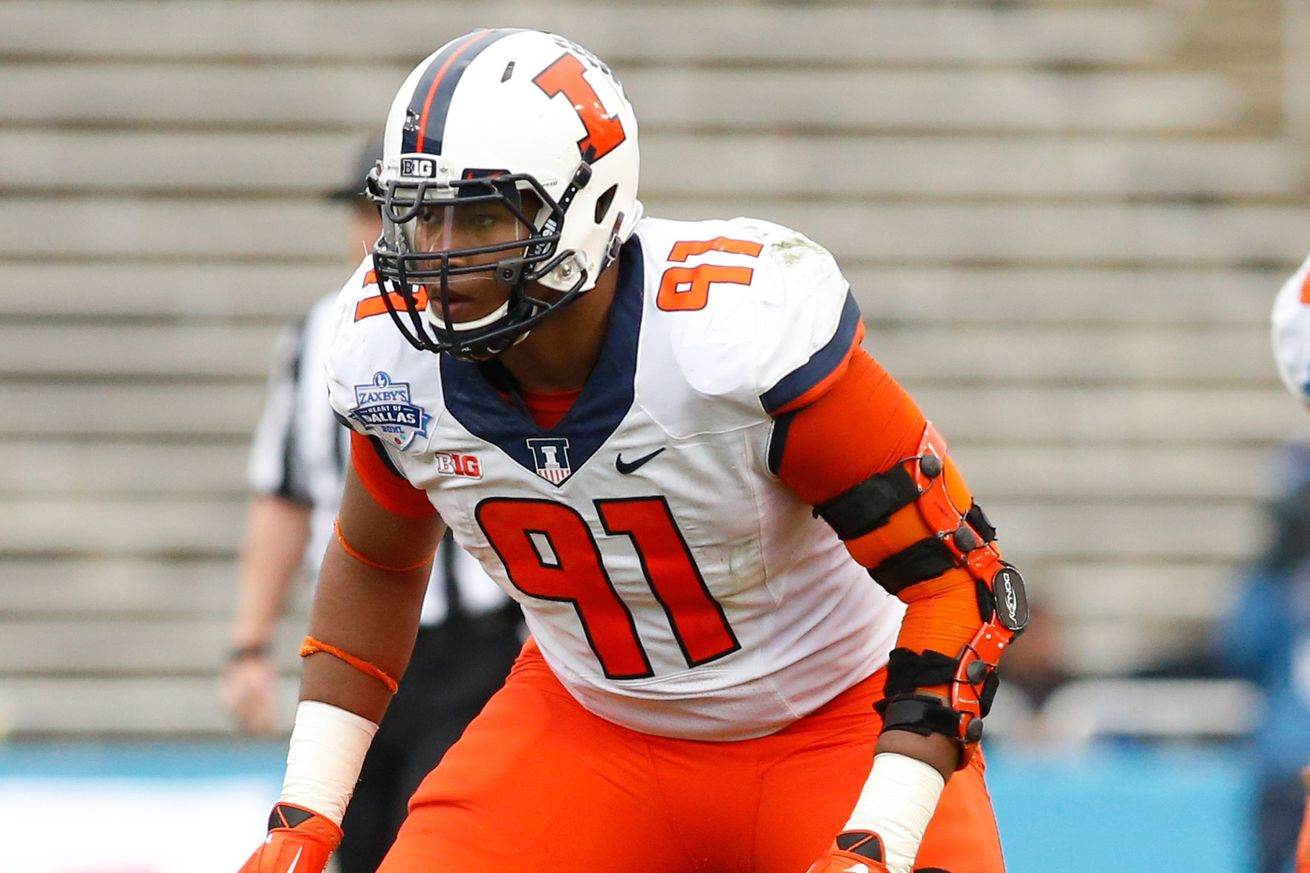 My journey through the 2017 NFL Draft class began a few weeks ago, and after looking at countless offensive and defensive line prospects, two things became clear.

Today we will focus on the second part of my findings, a member of this EDGE class.

Smoot, who is listed at 6’3″ 255 pounds by ESPN.com, played as a 4-3 defensive end at Illinois. He had a solid senior season, finishing with 5 sacks, 15 tackles for loss, and 56 total tackles in 12 games. To this point, where Smoot will land in the draft seems unclear, but the consensus among most pundits is that he will fall somewhere in the late first round to early second. This means that current playoff teams with a pass rushing need will probably have their chance to snag Smoot in the first round.

When watching Dawuane Smoot, the very first thing I noticed was his explosiveness. His speed off the ball is impressive, giving him a nice get-off and an advantage when looking to get after the quarterback.

This first clip is the perfect example of Smoot’s quickness at the snap of the ball. He is aware of the snap count, and gets a good jump to split the offensive lineman and make the play in the backfield. Finishing plays is often a problem for these young prospects, but I saw no issues in finishing against the run with Smoot. When he got to the ball carrier, he almost always made the runner pay. Against the pass, however, he had some issues.

Often times the reason behind this quickness off the ball is a player’s athleticism. Smoot is gifted in terms of athletic ability, and this athleticism shows up on the film.

Here we see that athleticism at work. Smoot gets a nice jump off the ball, forcing the offensive tackle to overcompensate for Smoot’s ability to get around the edge. When the tackle over-sets, Smoot hits him with a quick spin move back to the inside and comes up with the quarterback hit.

While this was an impressive down, a common problem I find with Smoot is his lack of pass rush moves. He tends to over-rely on either a spin move, or a simple outside rip edge rush on most snaps. This gets him into trouble, and probably negatively effected his sack total. He will need to learn a wider array of moves at the next level.

When he wins around the edge, however, it is a ton of fun to watch.

Another area in which Smoot excels is with his hands. He is both quick and smart with his hands, allowing him to swipe at offensive tackles, create separation and win around the edge.

As you can see on this play, Smoot does a nice job breaking the hands of the offensive tackle. This puts the tackle off balance, and allows Smoot to simply rip past him and get a hit on the quarterback. Smoot has both the body control and hand skill to beat even the best of offensive tackles in pass protection. As I mentioned earlier, however, an inside counter move must be developed for Smoot to reach his full pass rushing potential. He is almost there so many times, but he needs to develop more diverse moves.

Here you see Smoot’s hands at work against the run, but he wins in a similar way. Beating the offensive tackle around the edge both with his speed and by breaking his hands, and making the tackle from behind.

Of course, there are reasons which Smoot is not a top-ten prospect. Against the run, he tends to over-pursue at times and allow running backs to get by him. This is a common problem I have found with pass-rush-first edge rushers, and it is one which can be fixed. He must learn to get two yards deep in the backfield against the run, and to survey the play from there. With NFL coaching, I believe he can do so.

This problem of over-pursuit is a by product of his excellent first step at times, but he also gets lost in the play when he rips down the line too quickly, allowing for cut back lanes against zone runs.

Another issue which plagues Smoot is a lack of consistency. Watching his Nebraska film was very impressive, but his Michigan film was not nearly as good. Of course, level of competition plays a role here, but I would like to see Smoot develop a wider array of moves to give himself a better chance against the top tackles.

Overall, Dawuane Smoot is a very good NFL prospect. Smoot’s combination of powerful hands and good speed is a dangerous one for opposing offensive tackles to deal with. In the right situation, Smoot could be a productive pass rusher for a professional team very quickly.

The EDGE class this year is loaded, and I plan on taking you through many of the prospects as we move through the draft process. It will be interesting to see where Smoot falls in this talented EDGE draft class when it’s all said and done.

Texans-Raiders Rematch: Why A Win Means Nothing For Houston
A New Developmental League Could Change College Football Forever