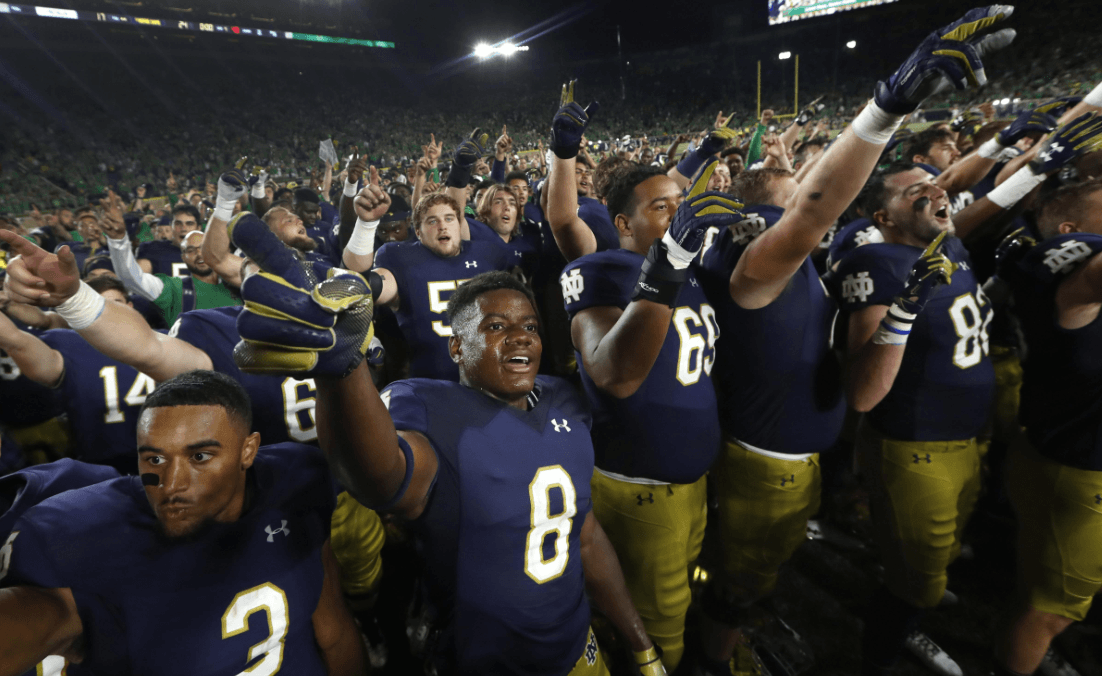 Week one is in the books and the Notre Dame Fighting Irish are 1-0 following a 24-17 win over the 12th ranked Michigan Wolverines. This season opener was one of the most heavily anticipated games in recent memory. As a fan of this team I spent weeks looking ahead to this game and fighting back nerves before kick off, but now that the game is over and the party has begun, let’s break down how the Irish beat Michigan and what they need to improve going forward.

Going into this game, all eyes were on Notre Dame signal caller Brandon Wimbush and how he would fare against Michigan’s top defense.

Coming off of a hit-and-miss season Wimbush would have to show improvement to give the Irish a chance in this one. Number 7 showed a lot of growth beyond his 12/22, 1 TD, 1 INT stat line.

Wimbush looked poised and collected in the pocket. With an almost continuous assault from Michigan’s pass rush, the New Jersey native stood firm and delivered some impressive throws.

The coaching staff designed a strong game plan for Wimbush that he executed well early, as they got him outside the pocket when they wanted to take big-play shots down field.

After months of hype surrounding the Michigan defense, it almost seemed like the Irish defense played with a point to prove. It truly was a group effort with Jerry Tillery, Daelin Hayes, and Khalid Kareem leading a ferocious pass rush.

Shea Patterson came into this game under center for the Wolverines with a lot of hype, but he didn’t have much of a chance under that much pressure.

Working hand in hand with the three-headed pass rushing monster were Drue Tranquill, Te’Von Coney, and Alohi Gilman. All three were there to make key plays for the Irish Saturday night, which will be critical the rest of the year.

All too often the Irish haven’t been a very complete unit on defense, but this group has the chance to be one of the best in the nation.

Who Made Their Mark

No, you’re not dreaming; 5’10”, 181-pound Chris Finke just channeled his inner Randy Moss and out jumped a Michigan defender for the second touchdown of the game. Beyond the incredible catch, Finke turned in one of his usual all around performances with 3 catches for 55 yards and a tackle on special teams.

Number 10 was everywhere the Irish needed him to be and it made a noticeable difference against the Wolverine defense.

Going into this there were question marks in the Irish backfield with Josh Adams leaving for the NFL. Dexter Williams was thought to be the answer but he was serving the first of a four-game suspension Saturday night, so with that in mind, Brian Kelly decided to go with a three-man back field and see who stood out.

The player who stood out most was Jafar Armstrong.

Number 8 in blue put on a strong performance when given the chance to make an impact with 15 carries for 35 yards and 2 touchdowns.

With some elusive running and big-play ability, I’d like to see Armstrong get more touches in the weeks ahead along with Tony Jones Jr., who also had a strong opening game. Overall – the Irish backfield is in better shape than initially expected.

The Irish defense was keyed by its ferocious pass rush and right in the middle of that was defensive lineman Khalid Kareem. Number 53 in the home blue was all over Shea Patterson in this one with two sacks and seven tackles. Kareem spoke with the media post game about his performance, along with senior captain Drue Tranquil.

That Irish defense was 🔥! @NDFootball senior captain Drue Tranquill and junior Khalid Kareem talked all about their game on the field after downing Michigan. #GoIrish https://t.co/togLvuiRuY

If Kareem can keep this fine play up the Irish will have a strong stable of pass rushers, making them one of the top defensive units in the nation.

What Needs to Improve?

So what needs to change in week two against Ball State?

Not much really, but the biggest struggle in this game for the Irish was on special teams. Two penalties on kickoffs, a kickoff return for a touchdown, and a 24-yard punt allowed the Wolverines to hang around in this one. The tackling on the kickoff return was particularly concerning, as the Irish need to do a better job getting the fundamentals right.

Touchdown, Michigan! Ambry Thomas (@Tavonn_) returns a kick 99 yards to the end zone for a score. Michigan cuts Notre Dame’s lead to 21-10 with 3:41 left in the first half. https://t.co/ldjoX4dyP0

Going along with the special teams play, I thought the Irish were too conservative in the second half on both sides of the ball.

Defensively, they backed off the pass rush that gave the Wolverines fits earlier in the game, which gave Shea Patterson enough time to make plays. While you want to keep everything in front of you up by 14, consistently dropping seven or eight players in coverage goes against this defense’s strengths.

As for the offensive struggles in the second half, Michigan’s defense certainly deserves their share of credit, but the playcalling was very conservative. Perhaps the good news is that Notre Dame won’t face a defense as good as Michigan’s the rest of the season. Regardless, Notre Dame has to keep the pedal to the metal in every game, and with just three points in the second half, Notre Dame will have to a better job finishing off opponents.

Overall – this was a very good all-around performance for the Irish against a quality opponent. They’ll have a few weeks to sharpen their game before going into a matchup with the Stanford Cardinal in South Bend, which could potentially have playoff implications.

Follow along with me on twitter [@PBPNick] and here on SlantSports.com for these weekly recaps of Notre Dame football. Go Irish!