Playoffs: What’s Next for the Washington Capitals? 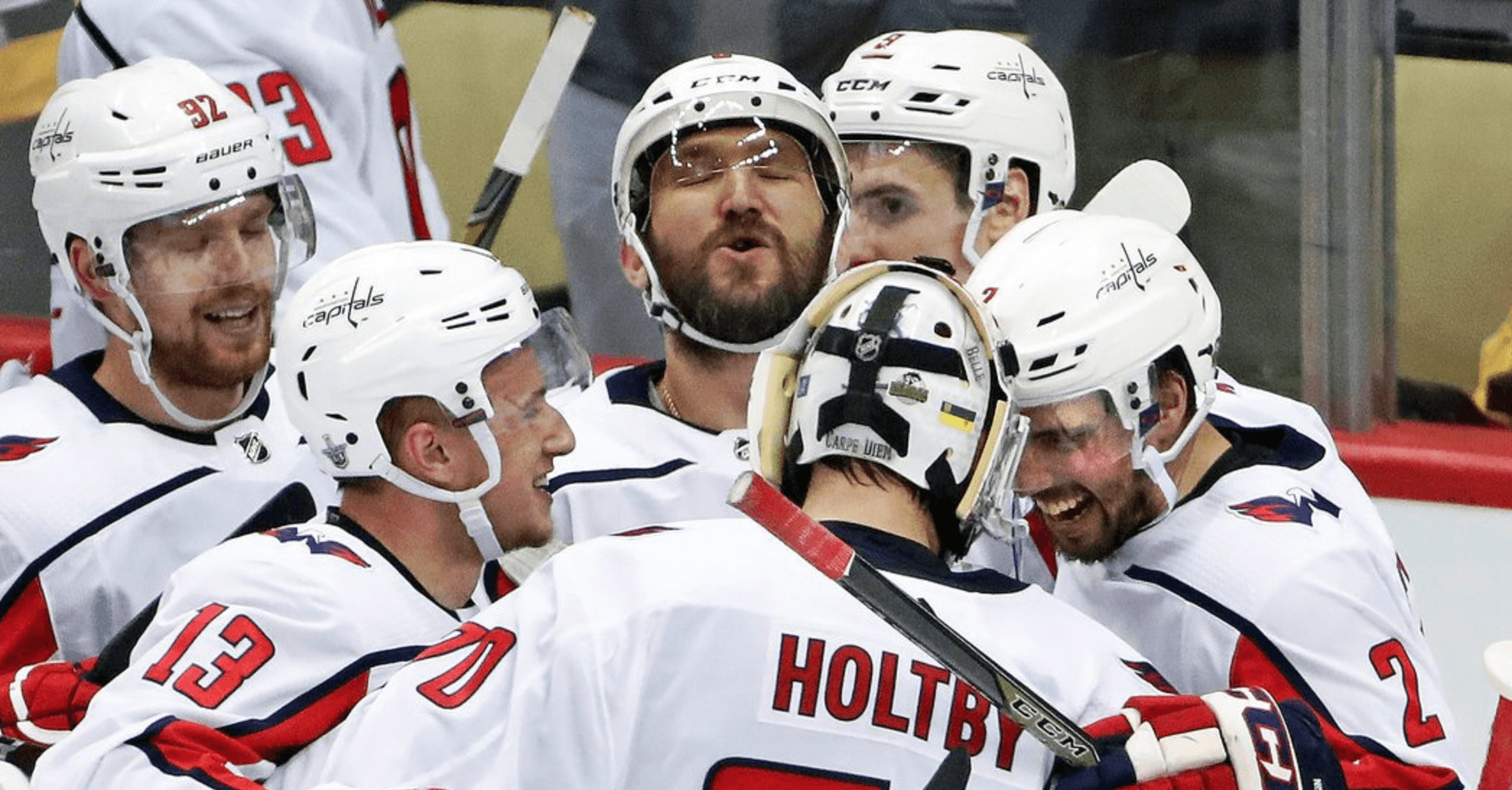 It finally happened. After years and years of disappointments, the Washington Capitals finally beat the Pittsburgh Penguins in round two of the Stanley Cup playoffs. Alex Ovechkin finally beat Sidney Crosby — the Tom Brady to his Peyton Manning — in a playoff series. The Caps haven’t advanced to round three of the playoffs since 1998, the year they reached the Stanley Cup Finals. The celebration below shows a team getting a weight lifted off their shoulders after finally taking care of business.

Caps center Evgeny Kuznetsov wins Washington’s second round series against the Penguins with an OT winner in Pittsburgh.

The problem is that was just round two. The Caps still need eight more wins to accomplish the ultimate goal and win the trophy Ovechkin needs to continue his ascent in the pantheon of hockey.

They’ll draw the Tampa Bay Lightning in the Eastern Conference Final, who are coming off easily handling a red-hot Boston Bruins squad. This is one of the most interesting playoff matchups in a while based on the sheer fact that this series can go one of two ways. This series is all about Washington and how they respond to their thrilling series win.

Lets break the two possibilities down with a look back at some Stanley Cup playoff history, with teams in similar situations.

The Capitals Keep it Rolling

The first possibility here is that the Capitals take this dramatic victory and build on it, push on and reach the Stanley Cup Final. They have the chance to replicate a run from playoffs passed, similar to that of the Vancouver Canucks from a few years back.

I have received a request to upload the CBC version of Alex Burrows’ game-winning overtime goal of Game 7 of the 2011 Stanley Cup Playoffs Western Conference Quarterfinals, so here it is! 😀 Alex Burrows becomes the hero on the ice tonight as he scored all of Vancouver’s goals, including the game-winning overtime goal that brought the Chicago Blackhawks’ 2010/2011 season to an end.

Look familiar? It should. A player in alone on a breakaway off of a turnover, burying the puck, to drive a dagger through the heart of their arch nemesis.

For years, just like the Capitals, the Vancouver Canucks struggled to get over the hump in the playoffs as they endured year after year of disappointment. They lost to the Chicago Blackhawks each of the previous two seasons and this was finally the moment where they beat the Hawks. I still get chills thinking about this goal and the call from Hockey Night in Canada’s play-by-play voice, Jim Hughson.

“Finally, after three seasons, and 19 playoff games against Chicago, for Vancouver, it’s a wonderful day for an exorcism.”

The Canucks took their newfound momentum and beat the Nashville Predators in round two, setting up a third round clash with the San Jose Sharks in the Western Conference Finals. They hardly broke a sweat in the series as they cruised through the first four games, setting up an elimination game five in Vancouver, which ended in the goal no one saw go in.

A goal you have to see to believe, no one except Kevin Bieksa knew where the puck was as he fires it past Antti Niemi to send the Canucks to the Finals.

Of course, the Canucks didn’t win the Cup, while the Capitals will be hoping for a better ending but they’re after a similar ride to the Stanley Cup Final.

The Caps are now riding the momentum and it’s easy to see them going through this Lightning team in short order with their newfound belief. Alex Ovechkin is having another impressive playoff, Evgeny Kuznetsov is playing the best hockey of his career, and Braden Holtby seems to have sorted out his pre-playoff struggles. If they can get Nick Bäckström back in the lineup before the series starts, they have a real chance to play for Lord Stanley.

So that’s the fairy tale ending to the season for Washington. Now it’s time for the more sad and typical Washington ending.

The Capitals pull a Capitals

Now let me explain the title here. “Pulling a Capitals,” would be defined as a team reaching the playoffs expecting to win it all, only to fall well short and not live up to the hype. This has been perfected by, you guessed it, the Washington Capitals.

The Capitals are a team whose postseason struggles are of historic proportions and it’s frankly part of a well documented history of failure in Washington sports. The Nationals can’t ever get out of their own way in October.

The Wizards have been relevant the last few seasons, and despite having some elite players, they can’t ever get over the hump. The Redskins are well… the Redskins. But now the Capitals have the chance to buck the negative trend in the nation’s capital and bring home the Stanley Cup. They’ve now become the trendy pick amongst hockey analysts around the league, which may be the worst possible thing for the Caps.

Look back to the St. Louis Blues in 2016 after they eliminated the defending champion Blackhawks in game seven at home. It felt like they had slayed their dragon and could go win it all. Despite knocking out the Dallas Stars in round two, they couldn’t seem to do anything with their momentum against the San Jose Sharks as they were eliminated in the conference final in six games.

Nick’s Pick for the Series

The Boston Bruins were my original pick to be Eastern Conference champions but that has obviously fallen through. While the Lightning looked impressive at times against the Bruins last round, I think the Capitals are going to get it done and move onto the Stanley Cup Final, winning the series in six games. This should be one heck of a series in terms of entertainment value with the stars on the ice for both sides.

So what do you think, will the Capitals get their happy ending, or will they fail to meet expectations once again?

Share your thoughts with me on the Caps and the rest of the Stanley Cup playoffs on twitter @PBPNick.