Signing Off: The Voice of Montclair State Says Farewell 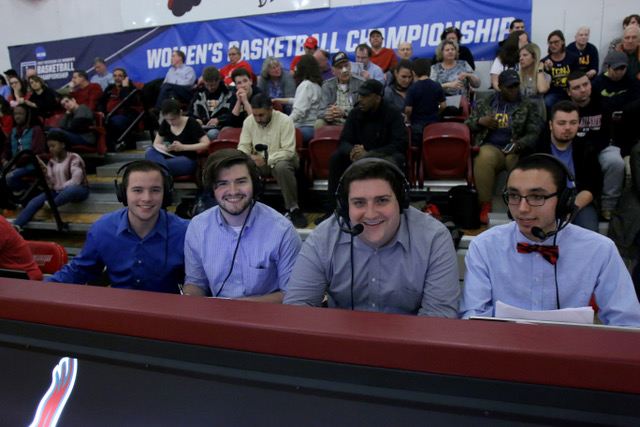 Tonight was hard. I wasn’t doing anything I’m not used to, in fact just another night at the office really, but the end result was the most difficult moment of my last four years. As a graduating Senior at Montclair State University, my time as the lead color commentator for Red Hawks athletics came to an end alongside my best friend and play by play voice Nick Flaherty.

The MSU baseball team played under the lights for the first time in Nick and I’s broadcasting career, coming out on top over Jersey City University to pull the attention up into our cozy and chilled press box.

There, Nick and I were able to make the story about ourselves. For the first and only time. When you are entrusted to do a job, you show up and give it everything you have. At least, that is how I’d like to be thought of.

If your job is to be the voice for those that may not have one, you better deliver. Nick and I were the voice of two conference championships for our outstanding women’s basketball team, and each time I watched friends since high school celebrate and cut the net down the emotions overwhelmed me.

Nick and I walked around campus just thinking about sports differently. For many people, sports are entertainment. An escape from reality. For Nick and I, they were a reality neither of us were prepared to live without.

Not on this night at least.

A ground ball to second base. I look at Nick and wait for him to call the play. The ball hits the glove of the MSU first baseman. The Red Hawks win the game. Our fellow classmates and friends have reason to celebrate, and once again we do too. The broadcast was clean. It went well. We sang on the air, talked about our days as if the microphones weren’t ever there, and legitimately enjoyed just sitting side by side taking in another game.

One last game.  A game that was over. What happened next was also fairly routine.

Nick wrapped up the basic details of the game, and I stepped in with my thoughts after that. I said what I had to say, knowing damn well that the inevitable was staring us in the face, and waited for more words from Nick.

The FCC is all for emotion, but doesn’t appreciate dead air after all. The voice of Montclair State athletics hadn’t gone quiet yet. Nick led me into my sign off from WMSC Sports, and it still had yet to hit me. I took a few deep breaths and tried to put a bow on what Friday nights in a football press box meant to me, or what every Wednesday night in the gym meant, and that’s without even letting my mind wreck itself by reaching back for memories of road trips or off-the-air moments with Nick.

I was done talking, and still impressively composed. This composure only lasted a few more seconds though. Nick started talking. It was all over.

Working with Nick was always so easy. He was committed, easy to communicate with, and set clear expectations for what I had to do as his analyst. Through my headset my inner monologue echoed. As always, Nick weaved together the perfect words about what the last four years have meant to him – knowing that each sentiment was shared by everyone graced to work with him.

Nick was done talking, and neither of us were composed. I put my hands on my ears one last time. I needed to make sure the studio had control of the broadcast. Again, the FCC doesn’t appreciate dead air after all.

The studio had it. A mess of wires, papers, and ballpark snacks sat in the press box with just one meaning – serve as a reminder of just how much this all meant to Nick and I. This was where we were at home as often as possible.

When we weren’t, Nick was even fortunate enough to invite me into his home numerous times to prepare for big broadcasts, watch sports and relax, or just play video games and be friends away from broadcasting.

I spent my four years of college wearing a heart monitor known better as a microphone at our campus’ sporting events. Sharing countless hours on the air with my best friend. Red Hawks football, basketball, and baseball created a bond with all of the Seniors at WMSC Sports that will make us a family for life.

My last seven heartfelt words at WMSC Sports probably couldn’t have been further from the truth actually. I know that everyone on this team is truly just getting started, thanks to the foundation we collectively created on the airwaves of 90.3 WMSC-FM. The Voice of Montclair State.