What We Learned From The NL East In The First Half 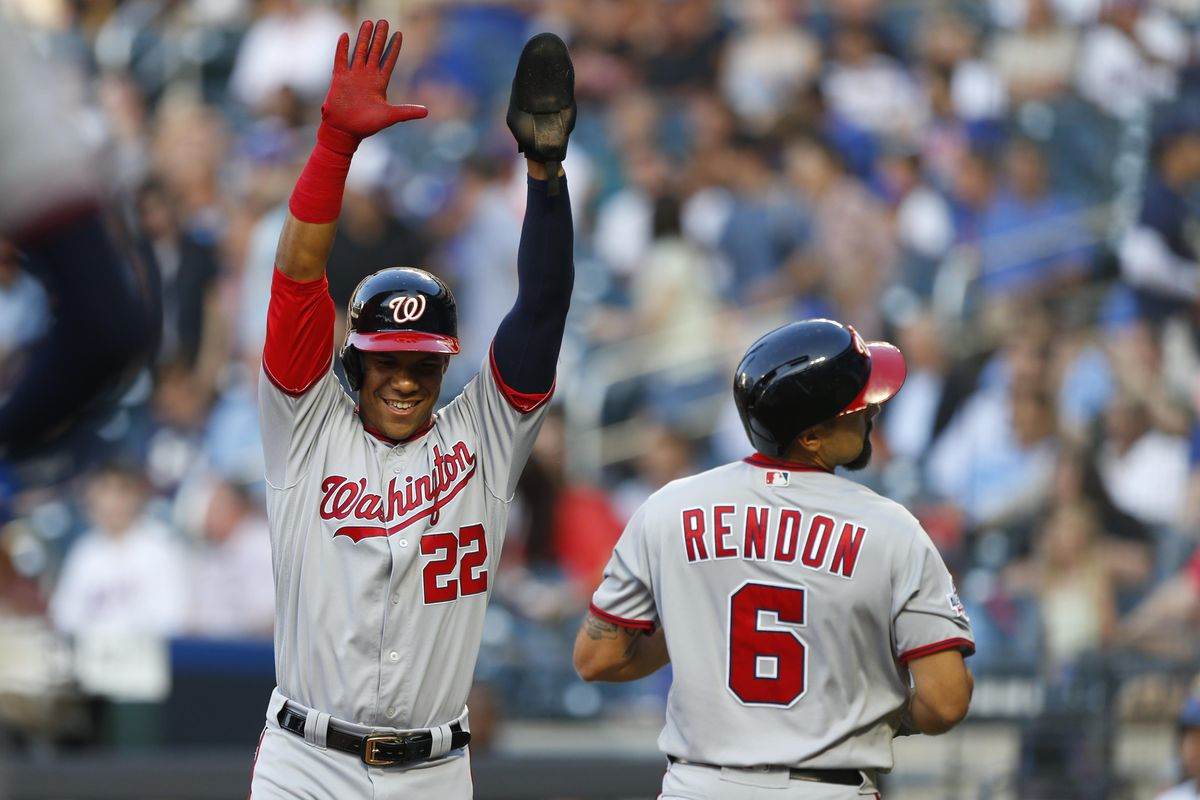 For some that means stacking up for a potential playoff run, for others that means figuring out the pieces to trade for top prospects to begin a rebuild, but for all, it’s about sticking to a game plan.

This seems like a great time to review what was an interesting and surprising first half for the NL East as the standings aren’t even near what many expected.

PHILADELPHIA PHILLIES: MAY BE BETTER THAN WE THOUGHT.

Going into this season, many (including myself) had higher expectations for Philadelphia, as this was the year they take that first step toward a push to the postseason following a successful rebuild.

If you told me they would be in first place come the break, I would have never believed you.

It has been a successful year so far for a very young and talented Phillies squad. Everything about this team spells excitement in the city of brotherly love, that hasn’t quit celebrating yet (thanks Eagles).

From Aaron Nola pitching his way into tomorrow’s All-Star Game with a 12-3 record and dominating NL hitters, César Hernandez who has been productive at the plate recently, all the way to Rhys Hoskins who leads the team in RBIs, the team has been productive. While struggling at times, they’ve climbed to the top of the division.

Speaking of struggling, while Philadelphia has had a successful first half, a big issue with the Phillies has been their offense and it is something they must address after the break.

Now, the team has struggled to hit, yet they are still in first place. However, it is no secret that if the Phillies want to bring the division crown home, they must get a bat in the lineup, specifically Manny Machado.

I know what everybody is thinking, “Why give the Orioles the world for a guy you can sign for nothing next year?”

Because the NL itself is so wide open, one piece will truly make the difference for the Phillies in the division race as well as the pennant race.

I personally believe a guy like Machado will send the Phillies on their way to win this division. We have seen it before, one bat makes the difference in the lineup.

The Phillies have taken advantage of a division that featured a heavily favored Washington Nationals team perform under expectations and a New York Mets team that doesn’t deserve to play at the intramural level.

Philadelphia’s biggest problem this year has been the Atlanta Braves, who currently sit 0.5 games back of first place and have been going back and fourth with Philadelphia for quite some time now.

A big trade at the deadline (for each side) will make the difference between the two and set up a clash come September.

ATLANTA BRAVES: ARE THEY JUST GETTING STARTED OR WILL THEY FALL?

What an interesting season for the Atlanta Braves.

Even with their recent slump, losing seven of their last 10, they still managed to end the first half 0.5 games back of first place. Maybe a break is what they truly needed.

Before getting into the negatives, lets talk about the positives.

The offense has been extremely reliable for Atlanta, with guys like Nick Markakis who is ageless with his .323 batting average, Freddie Freeman who has been the heart and soul of this team, and Ozzie Albies who has been very productive in his last 15 games.

If the season were to end today, Atlanta would face the Milwaukee Brewers in the Wild Card Game, meaning their first appearance in the postseason since 2013. That spells exciting things in Atlanta come the second half.

This team is a playoff team, for now, but how can they stay that way?

If there is one thing that needs to be addressed in Atlanta, it’s the starting rotation.

Julio Teheran has not had a great year this year, posting an ERA of 4.00 and giving up 47 runs, and Sean Newcomb hasn’t had his best stuff either, losing four of his last seven starts.

While you have had productive seasons from Mike Foltynewicz and Aníbal Sanchez, one more productive starter like J.A. Happ or Cole Hamels in that rotation could very well make the difference for the Braves.

As mentioned before, the Phillies and Braves are both expected to make big deals at the deadline, which will set up a clash of the titans in September. Who wants it more?

WASHINGTON NATIONALS: THE CLOCK IS ABOUT TO STRIKE MIDNIGHT

While the Washington Nationals get set to host the 89th annual All-Star game today, the team itself needs to address some serious issues.

It went from a disappointing start, to a hot reemergence, all the way back to a disappointment for the defending NL East Champions.

The Nationals currently sit 5.5 games back of first place and it seems to only be getting worse for the club.

Max Scherzer is the one of the only reasons the team is still slightly afloat. Scherzer, who will be the starting pitcher for the National League tomorrow night in the All-Star game, has had one of the best seasons of his career. Posting a 12-5 record with a 2.41 ERA, he has dominated NL hitters all year long and has been one of the only pieces that has kept the Nationals alive.

The Nationals themselves have acted like ‘The Walking Dead’ over the course of the last month and a half as they’ve posted a record of 15-24 since June 1.

From Bryce Harper finishing the first half batting .214, Michael Taylor who hasn’t produced well this year, Daniel Murphy not responding well since coming off the disabled list, and Tanner Roark with an ERA closing up on 5.00, the team has simply been brutal, especially for a year they were heavily favored to repeat as NL East Champions.

Now, of course as mentioned in previous articles written on this platform, the injuries have been a big problem, maybe even the biggest problem. From Howie Kendrick, Ryan Zimmerman, Stephen Strasburg, all the way to now most recently, Sean Doolittle, which is a huge blow to the Nats bullpen.

The Nationals’ time is running out to crawl back and win this division, and this year is more important then ever, because of the impending free agents at the end of the year which include Harper, Murphy, Matt Wieters, and Gio Gonzalez.

It is now or never for the Nationals, and if they want back in this race, it starts this Friday against the Braves.

MIAMI MARLINS: THEY COULD BE WORSE

Going into the year, we knew the Miami Marlins were in for many years of disappointment, rebuilding, and they were a long ways away from winning. This year has been expected and it seems to have gone the way we all predicted.

In fact, they actually could be worse, as the worst record in the league belongs to the San Diego Padres.

However, the team has been bad during the first half. The season was over way before it started, and they are showing you why. The Marlins sit at 41-57 and have found new ways to embarrass themselves on the field.

From José Ureña posting a 2-9 record, to Caleb Smith who has struggled all year, to Dan Straily who seems to walk every hitter he faces, the pitching has been a disaster this year, as expected.

While the Marlins may not have value in most of their pitching, their offense does provide something.

Rumors have been surfacing that Starlin Castro, Brian Anderson, and J.T. Realmuto are all open for trades, which if you are Derek Jeter you need to keep your focus on these three as they provide value for a lot of teams in pennant races (especially teams in the National League).

Castro is batting .365 in his last 15 games, Anderson has 11 hits in his last seven games, and Realmuto has played exceptionally well both on offense and defense.

The Marlins need to be big sellers at the deadline, and if Jeter expects the team to contend, he needs to pull of big trades and start bringing in some big prospects that will one day help the Marlins contend.

No matter what anybody says, at least New York Mets’ fans can say, “Well we started 11-1,” right?

Besides the first 12 games of the season, there has not been one overall positive for the New York Mets that is even worth discussing.

The brightest spot for the team has been Jacob deGrom, who is having a Cy-young caliber season without the numbers to back it up. deGrom still currently has the lowest ERA in the league with a 1.68 ERA.

Steven Matz and Zack Wheeler have also pitched decent recently, but with no run support in the lineup it is hard to prove that fact.

Everything that possibly could have gone wrong for the Mets this year has gone wrong. From countless injuries, to a clueless in-game Manager, to a General Manager stepping away for health reasons, this team is on track for one of their worst seasons in franchise history.

The way I see it, a few things have to happen for the New York Mets come the second half of the season, as well as the offseason.

The first thing is many need to be traded and that includes Matz, Wheeler, Brandon Nimmo, Amed Rosario, as they have the most value on the roster at the moment.

Jacob deGrom and/or Noah Syndergaard should be traded IF AND ONLY IF it is a blockbuster deal that helps the rebuild process go quicker.

The second thing is the Mets need to hire a GM outside of the organization. Right now it seems that John Ricco will be the GM going forward, but if the Mets want to get this rebuild right, it might be interesting to see someone who has watched it from the outside come in and try to fix it.

The third and last thing is, that new GM needs to fire Mickey Callaway. I don’t put the entire season on Mickey Callaway, but his poor in-game management and post-game comments, do not help his case on why he deserves to stay for another year.

Regardless, the Mets are in for an interesting second half in regard to the trade deadline as well as the personnel moves they will make over the course of the year.

You would think after a season this bad, the Wilpons would want to fix it at all cost? I guess we will have that answer very soon.

Follow me on Twitter @SMMcChesney to see all my NL East discussion during the 2018 season, as well as get involved in the discussion.

What We Learned From The NL East in May